The Braves Spend for Dallas Keuchel 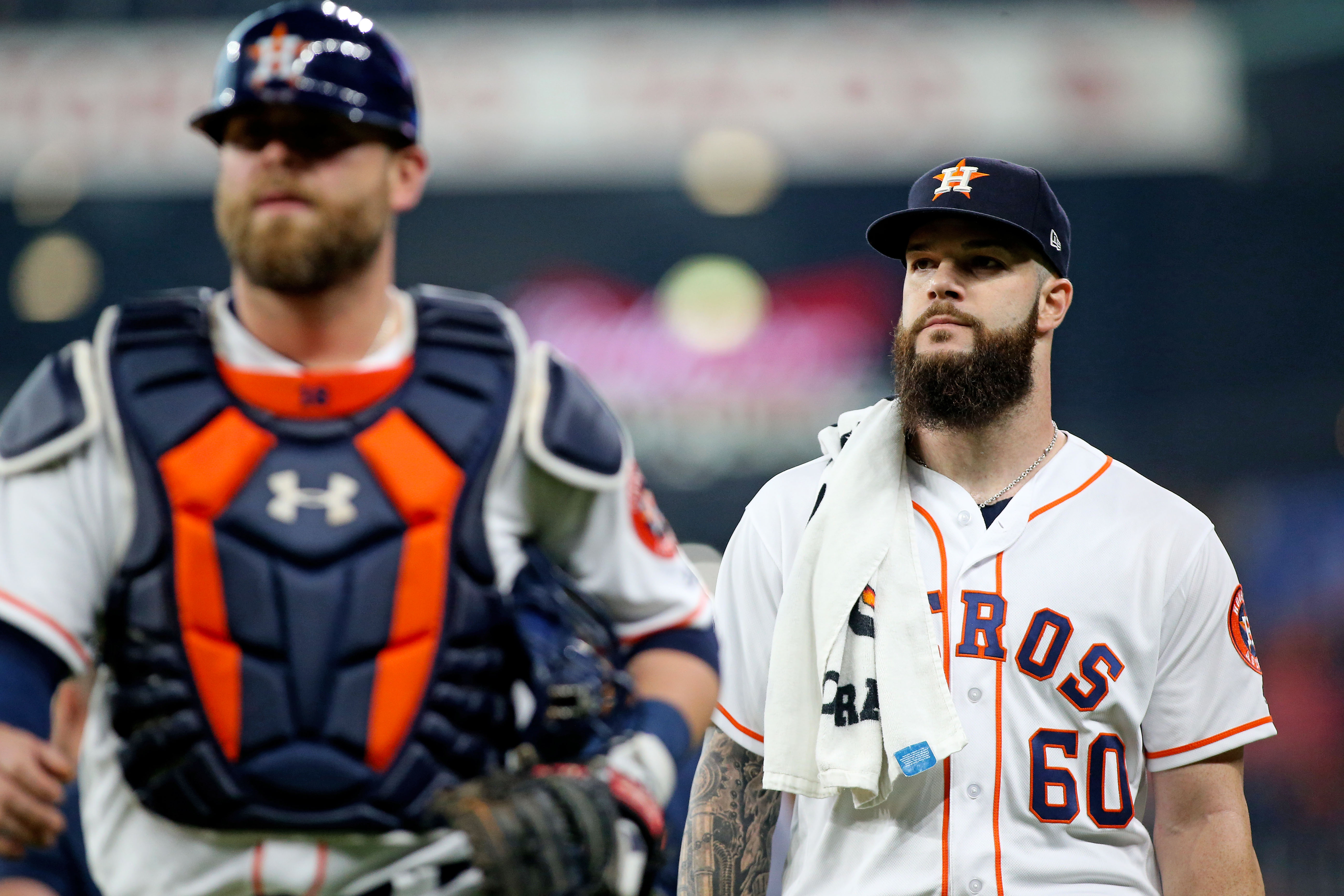 The Braves Spend for Dallas Keuchel

Let’s get one thing straight right off the bat – Dallas Keuchel isn’t Justin Verlander from a couple of seasons ago. He’s not going to show up and immediately turn into one of the game’s elite pitchers again. He’s going to have his issues. Mr. Keuchel won’t be perfect. But the Braves won’t ask him to be. They will simply ask him to give them innings and give their offense a chance to win games for him. If he does that, the Braves’ rotation, which has been thoroughly disappointing, might start to round into form.

I buried the lede, didn’t I? The former Houston Astros ace has agreed to a one-year contract worth an estimated $21.21 million with the Braves. The $21 million is a bit of a technicality here. It establishes his base pay for the rest of the year. When you prorate that total, Keuchel will make about $13 million for the remainder of 2019. But hey, $21 million sounds better.

Keuchel, like Craig Kimbrel, hit free agency for the first time this offseason looking to cash in a career’s worth of achievements with a big contract. But the market dried up for Keuchel, who couldn’t find a long-term deal after hitting 30 before the 2018 season. Instead, Keuchel found himself jobless as the winter’s thaw warmed and spring began. The market remained at a standstill as the draft loomed. No team was going to give up a draft pick for Keuchel and unfortunately, that meant he lost two-plus months of his Age-31 season to nothing more than a flawed system.

But now that he’s a Brave, what can we expect? I’m going to over Keuchel the pitcher and then also look at how he fits.

One thing to know right off the bat with the former Astro is he’s not velocity isn’t his game. Keuchel will throw five pitches, but his primary pitch is a 89 mph sinker. On a good day, he might hit 92 mph, but hasn’t hit 93 mph since 2017. The sinker won’t yield many strikeouts, but at his best, he’ll get a ton of low exit velocity and easy grounders. It’s worth mentioning that last season, the sinker wasn’t nearly as effective and hitters were hitting it with about 5 more mph in exit velocity. That’s a big swing and produced a difference in wOBA of 56 points.

The sinker is the star here – not so much because it’s his best pitch, but because he’ll use it 40-to-50% of the time. Against lefties, Keuchel’s game is basically sinker/slider and almost nothing else. The slider gets great depth and will come to the plate at about 10 mph slower than his fastball. Because of its movement, it’s often called a curveball. While it’s one of two pitches lefties will usually see, he will also throw a lot of sliders to righties. In fact, until last season, it was his secondary pitch against righties as well. It’s his best pitch when he needs a strikeout.

As I said, one change we saw with Keuchel last season was that he really pushed his cutter and changeup against righties. The cutter has been a work-in-progress for Keuchel, who upped his usage of the pitch to 15% last year and made it his preferred secondary offering to righties. Truthfully, that change may have been performance-driven. The cutter is a science and can take years to master. Keuchel shaved off a 100 points in wOBA using the cutter last year so perhaps he’s learned to utilize the offering better. That combined with weaker performance from his slider could lead Keuchel to follow a similar tract as C.C. Sabathia and Anibal Sanchez, who both relied more on their cutters as they aged.

His changeup has usually been a pretty solid pitch that dies at the plate. It’ll be interesting to see if the Braves try to get him to use it more. Despite low velocity, he still gets a good amount of whiffs on the change and it’s proven difficult to elevate.

Finally, Keuchel will go to a four-seamer as well. Velocity-wise, it’s similar to his sinker. It moves horizontally like his changeup, but its got a bit less sink. The result is interesting – hitters hit the balls more frequently that they do the changeup with better elevation, but the results aren’t much better. He’ll give up a few more homers with this pitch, but it’s a nice weapon to confuse hitters with.

A pitcher who relies on deception and stubbornness to overcome low velocity? If you think the Braves have just added a left-handed Julio Teheran, you probably aren’t alone but the thing that sets these two pitchers apart is what happens after a hitter puts the ball in play. Teheran is a flyball pitcher whereas hitters often struggle to elevate the ball against Keuchel. Now, consider the Braves – a team built greatly on defense, especially on the infield. Keuchel is a perfect fit in that aspect.

Is Keuchel a sexy pickup? Absolutely not. That would have been Kimbrel. But in many ways, Keuchel is the better choice of the two. The Braves rotation is in shambles right now, having endured a terrible season thus far from Mike Foltynewicz and, to put it nicely, an uneven campaign from Kevin Gausman. Teheran has been shockingly solid, even though his advanced metrics point to serious regression.

And then, there is the young duo of Max Fried and Mike Soroka. Fried has never threw more than 118.2 innings in a season. He’s on pace for 172. Soroka has crossed the 140-inning mark twice with a career-best 153.2 innings in 2017. But he also threw just 56.1 innings last season and, if you include the 9.1 innings he threw at Gwinnett earlier this season, he is on pace for roughly the same amount of frames as Fried is. That’s a dicey proposition.

It seems unlikely that the Braves made the decision to target Keuchel recently, but had it worked out like that, it also wouldn’t be a surprise. Over the last three weeks, Gausman has been especially bad (10.00 ERA in his last four starts) and Foltynewicz has been surrendering homeruns by the bushel. Even Fried has looked, dare I say, iffy of late.

Keuchel may not be capable of another sub-3.00 ERA like he had in 2014, 2015, and 2017. But he doesn’t really have to be an ace. What the Braves need from Keuchel is the same consistency and, for the most part, durability he showed in Houston. They need the guy who threw strikes, kept the ball in the yard, and averaged six innings per start. If he’s that version of Keuchel, he’s worth every penny for how he will stabilize the pitching staff.

Moving forward, Keuchel doesn’t solve everything. If Foltynewicz and Gausman continue their struggles, another starter could be a useful target. The bullpen remains a big question outside of Luke Jackson. The Braves seem unlikely to consider any offensive upgrades, but they’ll have to do something when Ender Inciarte returns.

With Keuchel in the fold, the Braves certainly look better. It’s also night to put that financial flexibility to work. But Alex Anthopoulos’s job is not done. In the mean time, the Braves, and their fans, hope to see Keuchel put on a show for the remainder of the season as he looks to land a better deal – with no qualifying offer attached this time – next offseason.