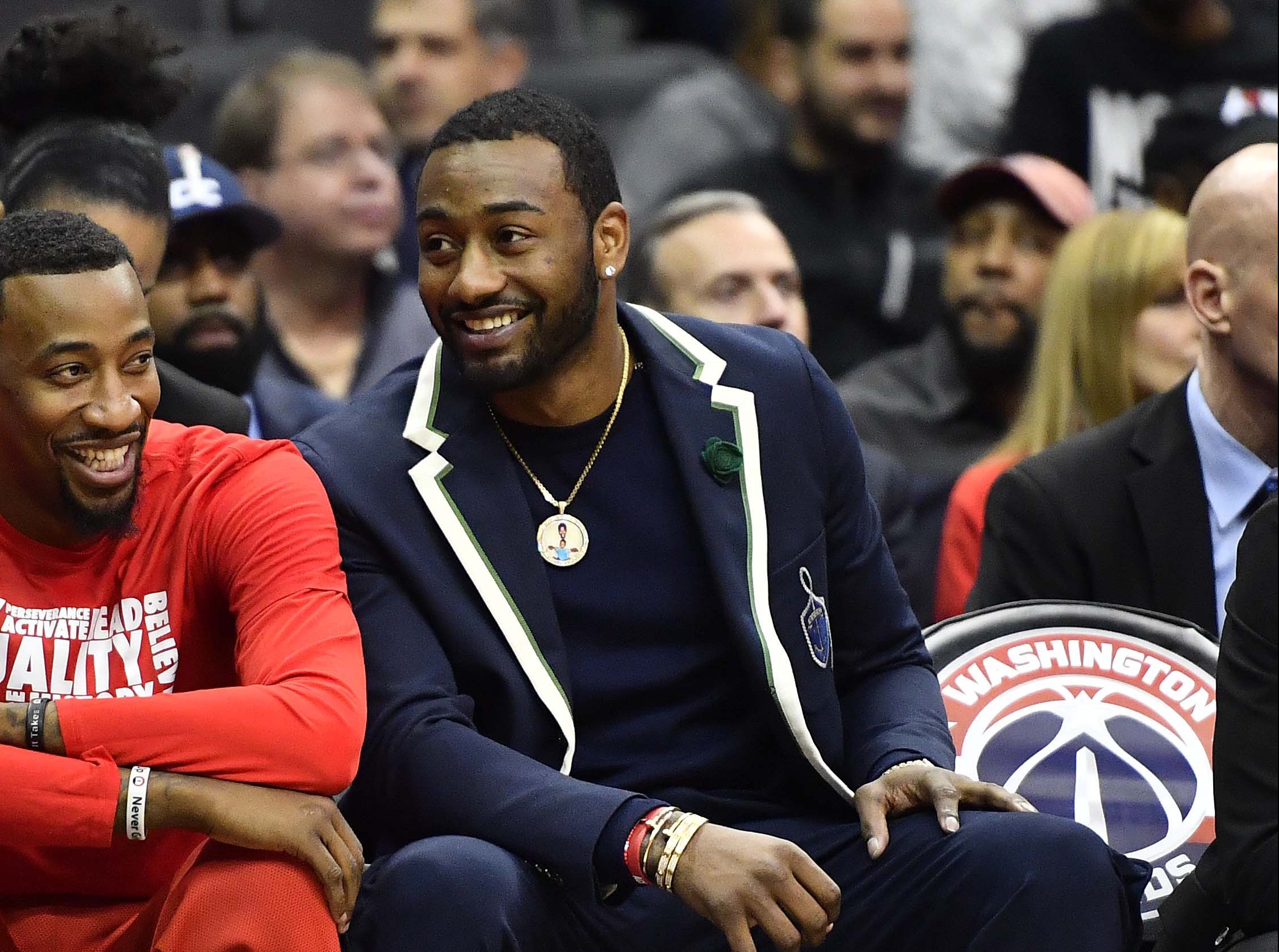 WASHINGTON, D.C. — Hoop District — Washington Wizards point guard John Wall was back in the D.C. area Sunday afternoon to support the hometown Mystics in their fifth game of the season, a win over the Dallas Wings. A fan of the game at any level, Wall sat courtside next to a couple of friends and two seats away from Redskins Senior Vice President of Player Personnel and Super Bowl MVP Doug Williams. The two Washington passers talked throughout much of the game and shared some laughs.

With the game winding down, Wall took a few moments to share with Hoop District where he is in his rehab process after surgery to repair his ruptured left Achilles tendon on February 12. That surgery came after an initial surgery on January 8, a debridement and repair of a Haglund’s deformity and a chronic Achilles tendon injury in his left heel, which was a semi-preventative measure to avoid Wall from rupturing his Achilles.

“Calf raises, leg press, all that type of stuff. I’m on the verge of getting my leg strength back. In the pool, swimming, stuff like that,” Wall said about some of the activites that he is currently able to do.

Less than four months after surgery to repair his ruptured Achiles, John Wall is back training (via flaveforreal/IG) pic.twitter.com/3eSrfwxIL8

The five-time All-Star is doing the majority of his rehabilitation in Miami where he has trained for each of the past two summers, but also gets workouts in at the Wizards practice facility when he is in the area. Director of Player Performance & Rehabilitation Jesse Phillips and Sr. Director, Health Wellness & Performance Steve Smith are working closely with Wall during this latest rehabilitation process.

Wall, 28, has been able to walk on his own without a walking boot or scooter for the last three weeks and has been able to run on a stationary bike since then. He still walks with a slight limp in his left leg, which is to be expected a third of the way through his projected recovery timeline.

From majority owner Ted Leonsis on down, no one wants Wall to rush his rehab process. That might seem like a no brainer, but anyone that knows Wall can share that he is always itching to get back on the court because of his love for the game. He has typically been a quick healer whether it was from his broken wrist in the 2015 playoffs or double knee surgery in the summer of 2016, but this rehab is a bit of a different animal because the Achilles is such an important body part for a speedy point guard.

A maturing Wall relative to injuries past understands the process and although he wants to play next season, is not putting a percentage on how he feels currently four months into an initial 12 month recovery timetable. As things project in the future, some believe Wall could be on the court for stationary shooting and ball handling in the next month or two.

“I have no [expletive] idea,” Wall explained when asked if he could put a percentage on how he feels. “I haven’t even tried to run or jump yet.”