For the Braves, It's Time To Go For It 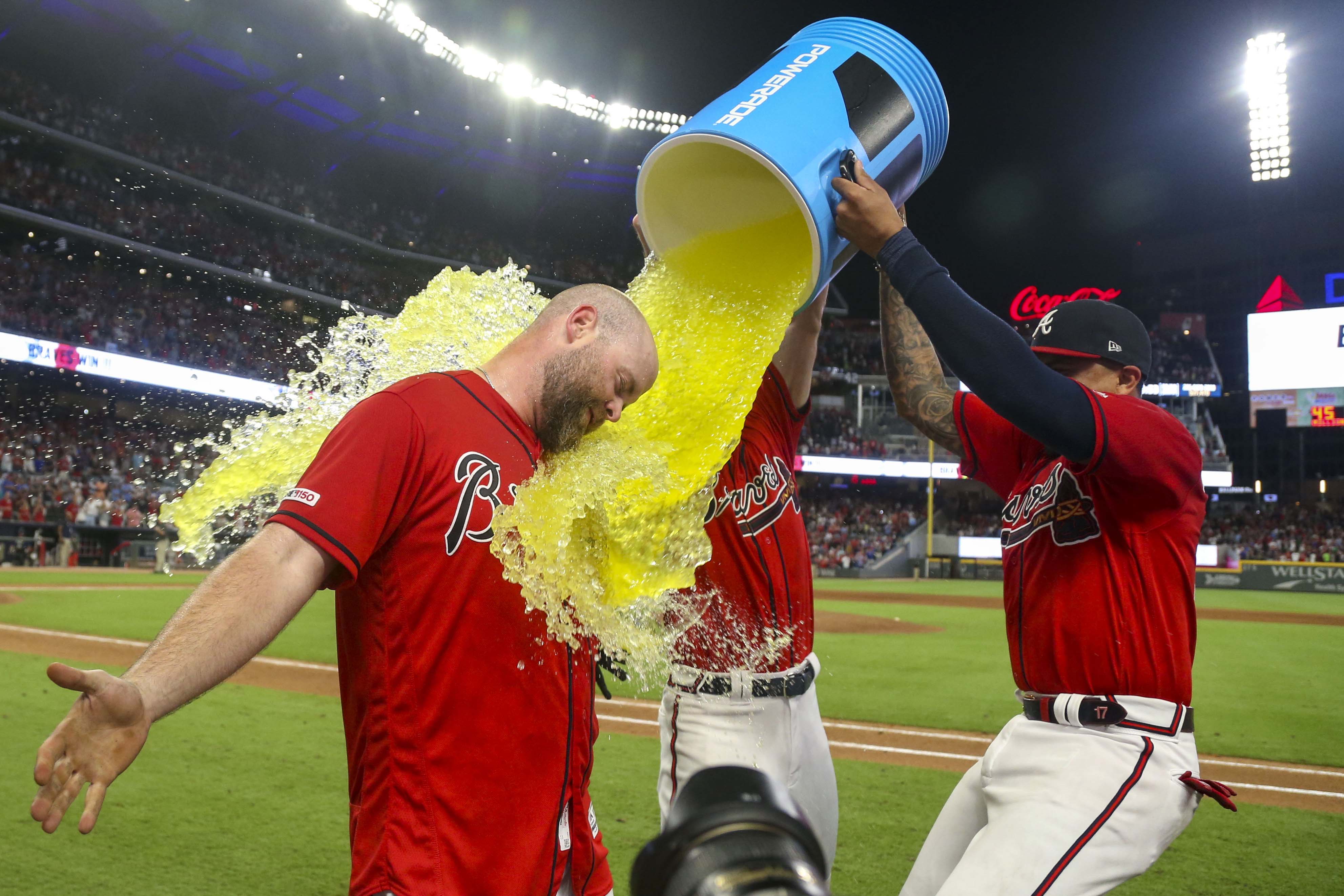 For the Braves, It's Time To Go For It

The Atlanta Braves have won eight consecutive games, including two dramatic walk-offs in their last three games. They lead the NL East by 2.5 games. They have Dallas Keuchel coming up in the near future. Only one other in the National League has a better record than the Braves.

For Braves General Manager Alex Anthopoulos, he might be looking at his team and thinking one thing – is this team good enough to win it all or do we need a little more? Is it time to break my own rules and start trading potential big assets to bring in difference makers? Is it time to put all the chips in the middle and go for a title?

Let’s be clear – this team is good without making any crazy moves on the trading market before the July 31st trading deadline. Since moving Ronald Acuña Jr. back to the leadoff spot and plugging Austin Riley into left field, the Braves lineup has became as deep as any team’s in baseball. It’s now up to the fourth-most runs scored i the National League and sports six players, including Riley, who have already reached double digits in homers.

But the pitching staff is, or at least should be, a concern. With another bad start by Max Fried, his ERA has now hit 4.11 after his tremendous start. Mike Foltynewicz has had a few good starts, but has mostly struggled this season and while Sean Newcomb has looked like a changed man since a move to the bullpen, it’s unknown whether his move back to the rotation to replace an injured – and struggling – Kevin Gausman will go. Keuchel is going to help this group, but the rotation may need more than one move to stabilize things.

The bullpen has been a consistent worry since, really, last season. If Newcomb does land a lasting spot in the rotation, the pen loses one of its best arms and it obviously already has its fair share of problems – namely a lack of guys you trust in high leverage situations. Looking at Gwinnett, players like Grant Dayton, Wes Parsons, and Chad Sobotka (currently on the IL) could deserve some longer looks and A.J. Minter recently rejoined the roster after a solid run in Triple-A. But the Braves need more.

The offense doesn’t need much – or really, any – tinkering. Sure, eventually, Ender Inciarte is going to come back and that’s going to put a wrinkle into this whole thing. And you can make an easy argument that the Braves can improve their offense by going after a Joey Gallo or someone like that. But let’s not get muddled down with trying to fix a non-problem. The offense is plenty good. But the pitching staff? Yeah, they need help.

For example, the Braves have given up five or more runs in six consecutive games. They’ve also won all six games. That kind of thing has only happened twice going back to 1908 – the 1937 Senators and 1929 Giants. You just don’t typically win games consistently when your pitching staff is allowing five runs a night. The Braves have, but that’s not sustainable.

Keuchel will help. Hopefully, Minter will also help. And maybe you can tinker with Dayton and others to help improve the pen as well. But bigger moves might be required and it’s time to kick the tires on those moves.

The problem, of course, is that the market is still developing. Some teams are still trying to decide if they want to buy or sell. Other teams want to wait until closer to the deadline before making moves to try to maximize return. To get the players the Braves want, they may have to make a push and make it really hard for other teams to think they’ll get a better deal if they wait. But that’s not really a bad thing either. The earlier you make a move, the more value the new player can give you.

We know what the Braves need: a starter and, at least, one reliever. And three teams that we know are definitely selling could be interested in dumping both to the Braves.

The Giants have Madison Bumgarner and Will Smith on the market. Both are battle-tested veterans, but both will also be free agents at the end of the year. How much will the Braves give up to acquire rentals? Anthopoulos has shown a reluctance to give up much for those type of players so far. Of course, there is also Bumgarner’s no trade clause to deal with. And let’s be honest – Bumgarner isn’t what he once was and there are concerns of how well he’ll fit in with this clubhouse. Not big concerns, but Bumgarner tends to hate to see other players show emotion on the field – even as he shows plenty.

Elsewhere, the Tigers are willing to trade Matt Boyd and have Shane Greene ready to package for a trade. The Braves saw Boyd up-close in their series with the Tigers a few weeks ago. The southpaw leads the AL in strikeout-to-walk rate. Funny enough, he was originally traded by Anthopoulos in 2015 when the Blue Jays acquired David Price for the stretch run. Greene, on the other hand, is leading the AL in saves and is pitching the best baseball of his career. That said, he’s less of a sure thing like Will Smith is. Unlike Smith, Greene is retainable for another season via arbitration. Boyd also wouldn’t be a rental – he’s team-controlled for three more years after this season.

And then there’s Anthopoulos’s old mates in Toronto. Injuries have decimated a pitching staff that wasn’t that good anyway. Might they be willing to deal Marcus Stroman (finally!) and Ken Giles? In a way, Stroman seems like a perfect fit for the cocky and fun Braves. He’ll have one more expensive season of arbitration and has bounced back nicely after a tough 2018 season. A groundball artist, he seems suited for a team with a great infield defense like the Braves. Giles is pitching like the Giles of old, though he recently hit the DL with inflammation in his right elbow. There’s no timetable yet for his return so this could be a small thing – or a really big thing. Like Stroman, Giles has a year of arbitration left.

Two other teams – with two very different expectations entering this season – could become sellers depending on how the next month goes. Both the Rangers and Indians are in the AL Wild Card hunt. They each have assets that could be intriguing to the Braves (Mike Minor, Shawn Kelley, Trevor Bauer, Brad Hand). If they become sellers, the Braves would be interested.

Other teams might not be perfect fits to address both the rotation and bullpen, but have pieces that could make the Braves better. Felipe Vazquez would be a great addition from the Pirates, for instance. Kirby Yates is one of the game’s best relievers and the Padres only control him through next season. Hansel Robles, once a good arm that flamed out for the Mets, has found second-life with the Angels and is controlled for two more years. The Royals would have to cover much of the tab, but Ian Kennedy has been a revelation since a move to the pen and the Braves could also grab Jake Diekman to give the bullpen a double-infusion of veteran talent.

There are a lot of possibilities and while things are gong well for the Braves right now, the team shouldn’t ignore their weaknesses. You can’t win every game you give up five runs in. It’s a quirky little thing that they have of late, but that simply cannot continue. Keep the momentum, though, and add talent to the team. Don’t wait and potentially lose out on some of these talented arms. Be decisive and go for it.

This team should be very good regardless of what happens. But they could be great. Yes, it will cost prospects – some of which are good. You risk watching a prospect turn into a productive major leaguer elsewhere and having a great career. But don’t be afraid of that. While the Braves are set up to compete for years with waves of talent coming through, none of that is promised. All you can do, however, is look at what is right in front of you and that’s the 2019 season. What will it take to win a World Series this year? If it’s pitching, go get pitching.

Be aggressive, Alex. Go get your guys and let’s roll.