Diligent Troy Brown Jr. details his offseason work and hopes for next season 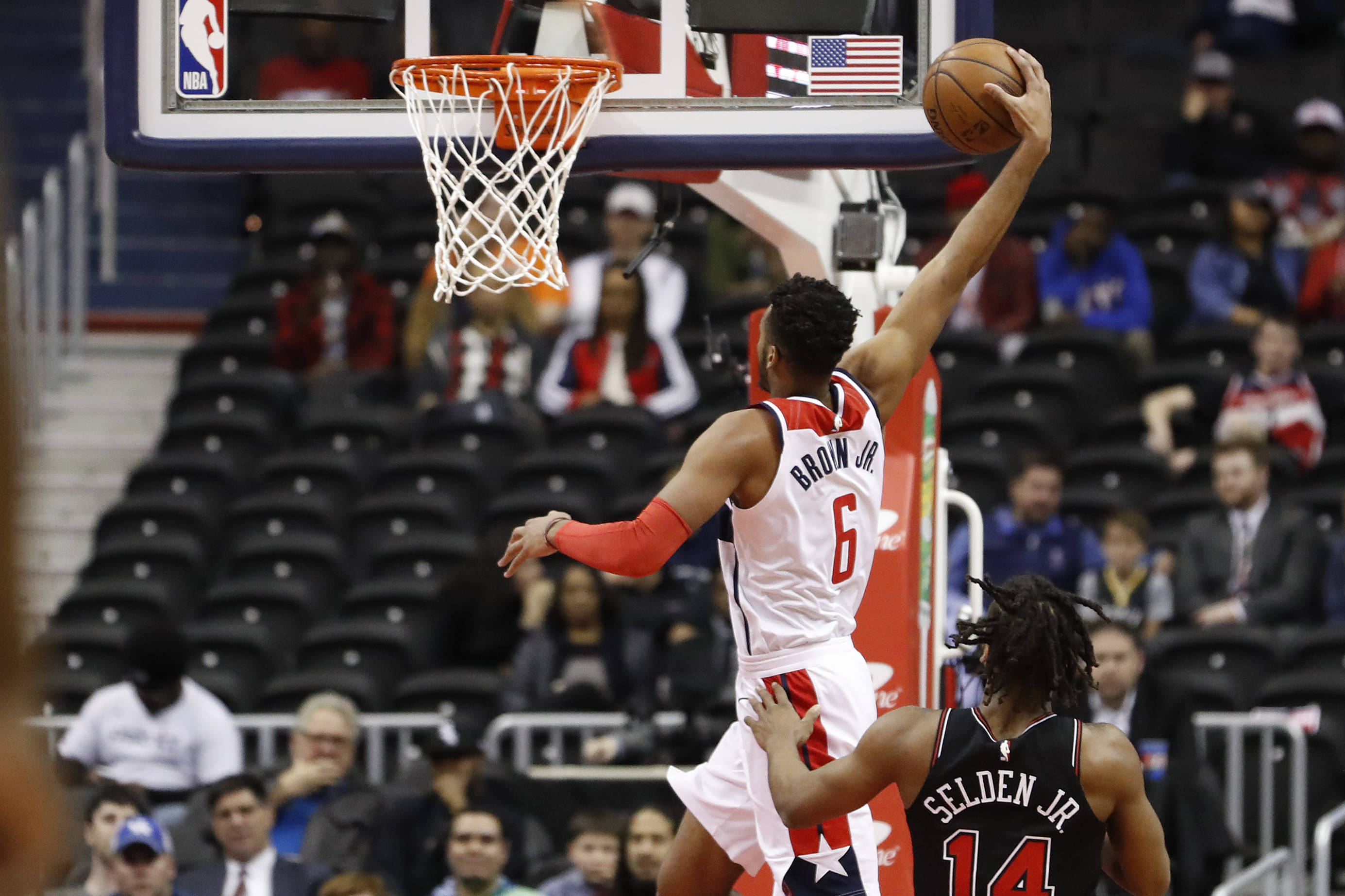 Diligent Troy Brown Jr. details his offseason work and hopes for next season

There were not a ton of positives from the Washington Wizards during the 2018-19 season after finishing 32-50 and missing the playoffs for the second time in six years. One silver lining was the late play of rookie Troy Brown Jr.

When the 19-year old was given a longer leash, he started to flash his worth as a first-round draft pick. Over the last 22 games of the season, Brown averaged 8.1 points, 4.8 rebounds, and 2.3 assists in 23.5 minutes per game. In a win in Denver over the Nugget, Brown dropped a career-high 24 points on 9-for-16 shooting including five three-pointers.

Following in the footsteps of Bradley Beal and John Wall, Brown took some time to support the Washington Mystics at the Entertainment and Sports Arena. He sat courtside with Capital City Go-Go general manager Pops Mensah-Bonsu and enjoyed a competitive rematch of the 2018 WNBA Finals between the Mystics and Seattle Storm. After the game, Brown shared how his offseason training is going two months into the offseason.

With the roster in flux, Brown is probably the third most popular player on the team behind Wall and Beal so it was no surprise that both kids and adults asked for autographs and pictures with him. Brown estimated he took at least 20 pictures with fans and enjoyed the experience.

“It’s definitely good to just have people recognize your face especially even though with the season we had last year, people still care, there are still die-hard fans that love the Wizards and you know it’s D.C. Family. It definitely makes me feel good,” Brown expressed.

Entering his second season in the NBA, Brown is back in his hometown of Las Vegas to be the majority of his training. He is again working with IMPACT Basketball who he trained with during his draft process last year. Wall has previously used IMPACT Basketball, too. Brown is working closest with Founder and President of Impact Joe Abunassar and Program Coordinator & Director of Player Development Andrew Moore.

After two weeks off to clear his mind, Brown was back training and typically works out two to three times a day. An average day in the life of Troy Brown Jr. right now is waking up at 7:30 to get to the gym by 8:30 where he starts treatment. Then he will lift weights and do pilates for workout number one followed by his second workout of on-court activity. After lunch and a one to two-hour nap, Brown is back at the gym for more court work. There are a couple of things that Brown is focusing on most entering the 2019-20 season.

What impressed Washington with Brown during the pre-draft process last year was his maturity for a then 18-year old. None of that has changed and led head coach Scott Brooks to want Brown to add another tool to his arsenal, one that you would not expect from a teenager.

“Coach Brooks talked about me being a leader,” Brown said. “Taking that step and not being a timid player that is waiting for somebody else to get it done. Me stepping up and being able to be the responsible one. Lead a team and tell someone where they are supposed to be and be in charge of things. Not saying that I am the star player or anything, but just taking on that responsibility of being a leader on the court.”

Brown does not take such a request lightly and will have a good teacher in Beal to try and grow in such a role. His on-court role will certainly be growing, too. Depending on how Washington fills out their remaining six roster spots, at a minimum, Brown could be in line to start at either point guard or small forward. The Oregon product does not take that lightly and wants to earn the right to be in the starting lineup as he was for the last 10 games last season.

That Brown was able to get his feet wet in the NBA late in the season so that he has the actual film to work off of this summer helps jumpstart his development compared to red-shirting his rookie season.

“It was huge,” Brown said about the confidence-building experience he got at the end of the year. “Just having something to go off of. Just something to reflect back on during the season. It’s hard to look at the stuff that I did in the G League and call it production just because of the fact that it still is the G League at the end of the day. You want to produce in the NBA.”

An ordinary 19-year old may say that he is hoping to average 20 points a game in the NBA and no one would really blame them. Troy Brown Jr. would obviously welcome more production in his second season in the NBA, but he is prioritizing team success first, which speaks volumes to his character.

“Coming in and making a difference, a big impact, being a leader on the court. Of course, I want to average more points and rebounds and stuff like that, but this year I’m thinking more like team goals. Last year, I feel like with the guys we had we could have had a little bit better season so coming into next year if we can do some things and have a better record, for me, that makes all the difference.”