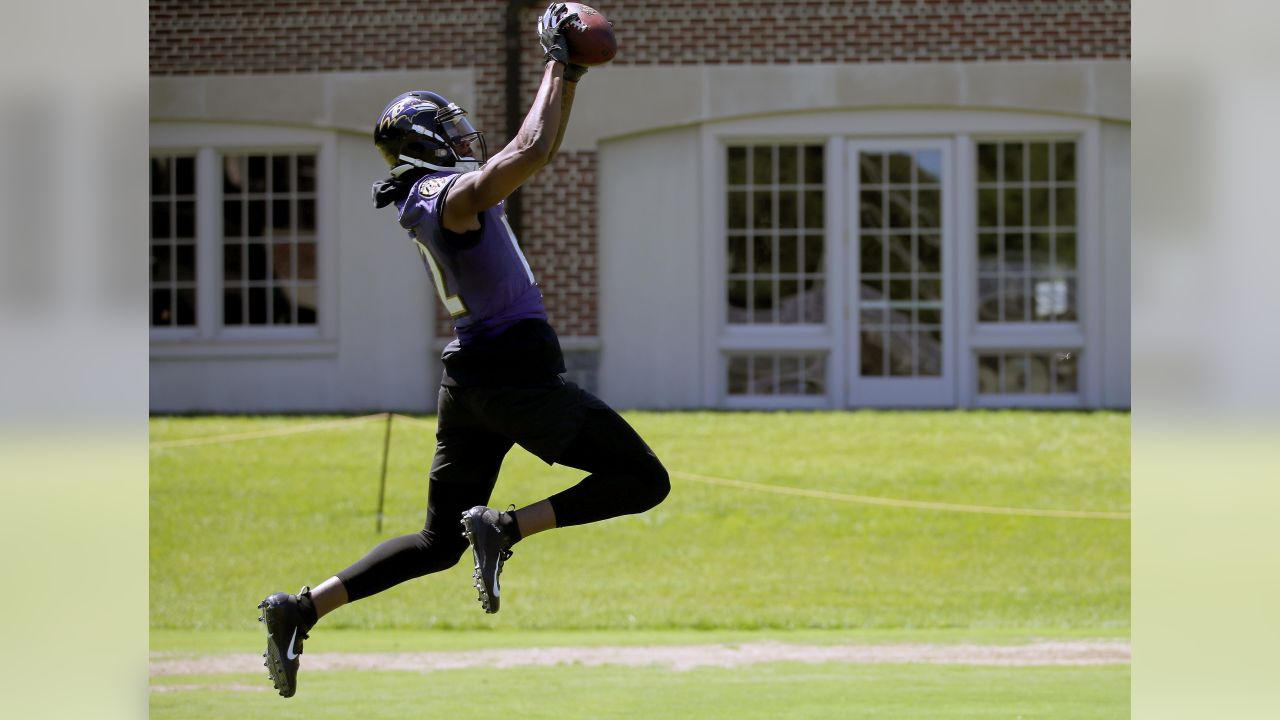 Pictured above is second-year receiver Jaleel Scott who was praised by Ravens coaches for making great strides in his craft over the offseason.

A hamstring injury suffered during training camp last year meant Scott spent his entire rookie season on injured reserve. Scott has returned stronger and more confident, eager to become the playmaker the Ravens envisioned when they drafted him in the fourth round.

“I think I had a great practice to end minicamp, and now I’m going to get ready for the start of training camp,” Scott said. “I want to show people I can be a deep threat, that I can make big plays and do things in the red zone, help us score points. That’s my goal.”

But a guy who did not show up making great strides was DT Michael Pierce, who was sent home for lack of conditioning.

“Throughout the offseason, I tend to lift more than run,” Pierce said. “Being a nose guard, I want to be strong or what not. I, honestly, just mismanaged my running a little bit.”

“At the end of the day, you expect a team leader to come back in better shape than I did,” Pierce said. “That’s a mistake on my behalf I have to correct. I don’t want to get into much more than that.”

With the offseason program wrapped up, the Ravens break for five and a half weeks. Pierce will have the opportunity to slim down and get into shape before the start of training camp in late July. Defensive Coordinator Wink Martindale said during minicamp that he had no doubt Pierce would eventually work his way back into form.

Pierce finished as the Ravens’ highest-rated defender last season, according to Pro Football Focus, and served as one of the league’s top run stuffers for a unit that allowed only 82.9 rushing yards per game.

Meanwhile, with a loaded secondary featuring one of the league’s brightest young cornerbacks, a top-tier slot defender, two rock-solid veterans, and a future Hall of Famer, it’s DeShon Elliott who is grabbing the attention this offseason.

The former sixth-round pick didn’t see the field during his rookie season after suffering a fractured forearm but has made strides in his second year.

Elliott was named the Ravens’ surprise offseason standout by ESPN.

“The 2018 sixth-round pick made the play of the offseason when he raced nearly halfway across the field to make a diving interception and then added another pick during mandatory minicamp,” ESPN wrote. “Baltimore has a loaded secondary, but it looks as if the Ravens are going to need to find a way to get Elliott on the field this season.”

TE Hayden Hurst is a man on a mission. Coming off surgery to repair a fractured foot which limited his impact as a rookie, Hurst bulked up after reportedly adding 20 pounds of muscle this offseason, and is poised to be a key contributor among a loaded tight end group.

Hurst joined “The Jim Rome Show” Friday and spoke about the expectations heading into his second season.

“I think the biggest thing for me is the more I get into the rotation, the more the coaches trust me, it’s just going to help my confidence because it’s going to let me know I’m playing at a high level, which I know that I’m capable of,” Hurst said.

Hurst, who was drafted seven picks ahead of Lamar Jackson in 2018, praised the maturity of his teammate.

“He’s just so impressive the way he carries himself,” Hurst said about Jackson. “I know he catches a lot of slack in the media, but he’s such an incredible athlete. It’s fun to watch him grow just every day. He’ll have one bad throw in a period, and the next period he’s incredible. He just bounces back. … He’s really fun to watch, and I’m glad I’m his teammate.”