It's Way Too Soon For Packers to Panic About Rodgers, LaFleur 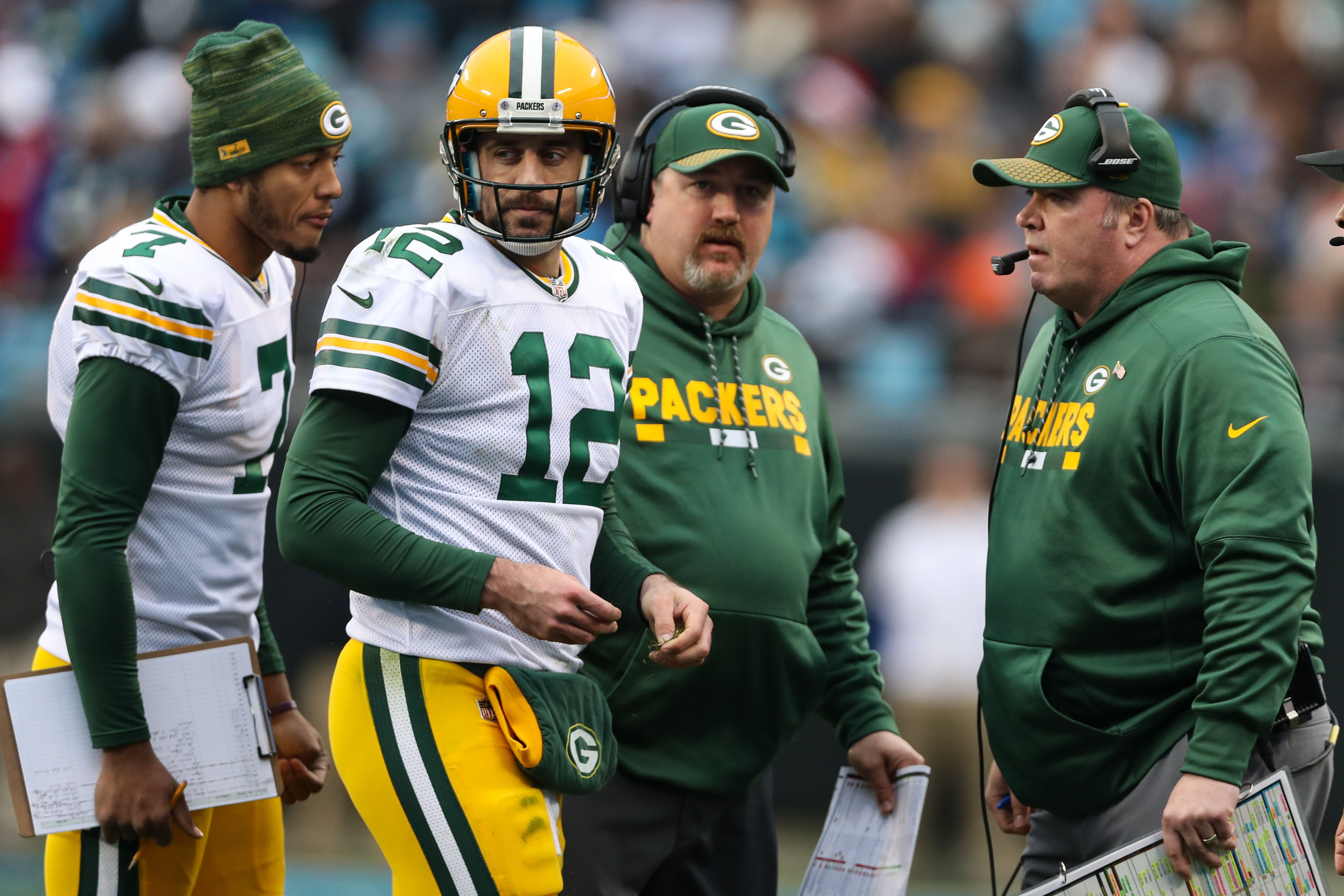 It's Way Too Soon For Packers to Panic About Rodgers, LaFleur

Minicamp is barely over for the Green Bay Packers and training camp is still more than a month away, but the media is already analyzing the relationship between rookie head coach Matt LaFleur and franchise quarterback Aaron Rodgers.

In an in-depth article, NFL.com’s Michael Silver analyzed the issue of audibles and how the coach and the quarterback don’t necessarily see eye-to-eye on how much flexibility Rodgers should have at changing plays at the line of scrimmage.

“Aaron and I have had some good talks, and we’re going to have to talk a lot more — and one thing we have to work through is the audible thing,” LaFleur told Silver. “We’re running a system I first picked up while working with Kyle [Shanahan] in Houston a decade ago, and we’ve never really had a quarterback who’s had complete freedom to change plays at the line, because that’s not really the way the offense is set up. But, I mean, this is Aaron Rodgers. He’s had a lot of freedom to make those calls, and deservedly so. Now, how do we reconcile that, and get to a place where we put him in the best position to succeed?”

Under previous head coach Mike McCarthy, Rodgers had a lot of freedom to change plays at the line and, if you ask him, he was very good at it.

“It’s a conversation in progress. I don’t think you want to ask me to turn off 11 years (of recognizing defenses). We have a number of check with mes and line-of-scrimmage stuff. It’s just the other stuff that really not many people in this league can do,” Rodgers said after Tuesday’s practice at minicamp last week. “That’s not like a humblebrag or anything; that’s just a fact. There aren’t many people that can do at the line of scrimmage what I’ve done over the years. I mean, obviously, Tommy [Brady] can do it, no doubt. Peyton [Manning] could do it. Drew [Brees] can do it. [Patrick] Mahomes will be able to do it. Ben [Roethlisberger] has called the two-minute for years. There are a few of us who’ve just done it; it’s kind of second nature. And that’s just the icing on the cake for what I can do in this offense.”

But LaFleur’s offense doesn’t feature audibles in the traditional sense. “I guess from what you consider the true standard of ‘audibles,’ you’re right — we have not had that,” LaFleur explained. “Because, you know, we pride ourselves on having concepts that have answers for whatever. Now, it might not always be the best answer, but you have an answer. But when there are plays that are called that have maybe not a very good answer, we typically call two plays and we run one or the other, based upon the look that the defense is giving us. The quarterback chooses, and there are criteria: We try to teach him the criteria for why we would want this play over the other play.”

LaFleur explained why it’s difficult to change plays at the line of scrimmage in his system. “We move a lot more. There’s a lot more motion,” the coach added. “There are a lot more moving parts. And so, if you just let the quarterback have that freedom to just get to whatever, I’m afraid it would slow our guys down. Now, he is a special talent and he’s got an incredible mind, so as we move forward throughout this process, he’s getting more freedom. It’s just, where is that happy medium?”

Finding the happy medium will take some time. It will feature a feeling out process between quarterback and coach that has already gotten under way. It is vital for the Packers long-term success that Rodgers and LaFleur end up with a meeting of the minds and can work together for the benefit of the team.

In training camp, the process will continue. Rodgers and LaFleur will likely meet somewhere in the middle with Rodgers having more freedom than past quarterbacks in the LaFleur/Shanahan system but Rodgers having fewer options than he had under McCarthy.

The important thing is that Rodgers eventually believes he can succeed in LaFleur’s system. It will take time to develop trust and a comfort level in the new offense. Eventually, the plays and the terminology will become second nature and Rodgers will be able to see what this offense can do.

The pundits who are saying there is already serious conflict between LaFleur and Rodgers are premature. It’s easy to read between the lines and say it’s the same old problem Rodgers had with McCarthy and the Packers are in trouble before training camp even gets under way. But neither Rodgers nor LaFleur got to where they are without learning how to adapt to new situations and overcome challenges. Training camp is still more than a month away and the regular season doesn’t start for 11 more weeks.

Now it’s up to LaFleur and Rodgers to do the same. They need to find enough common ground to bring out the best in Rodgers within LaFleur’s system. This process is far from over. In fact, it’s just beginning. How well they succeed will go a long way to determining how successful the Packers are in the LaFleur era. Stay tuned.