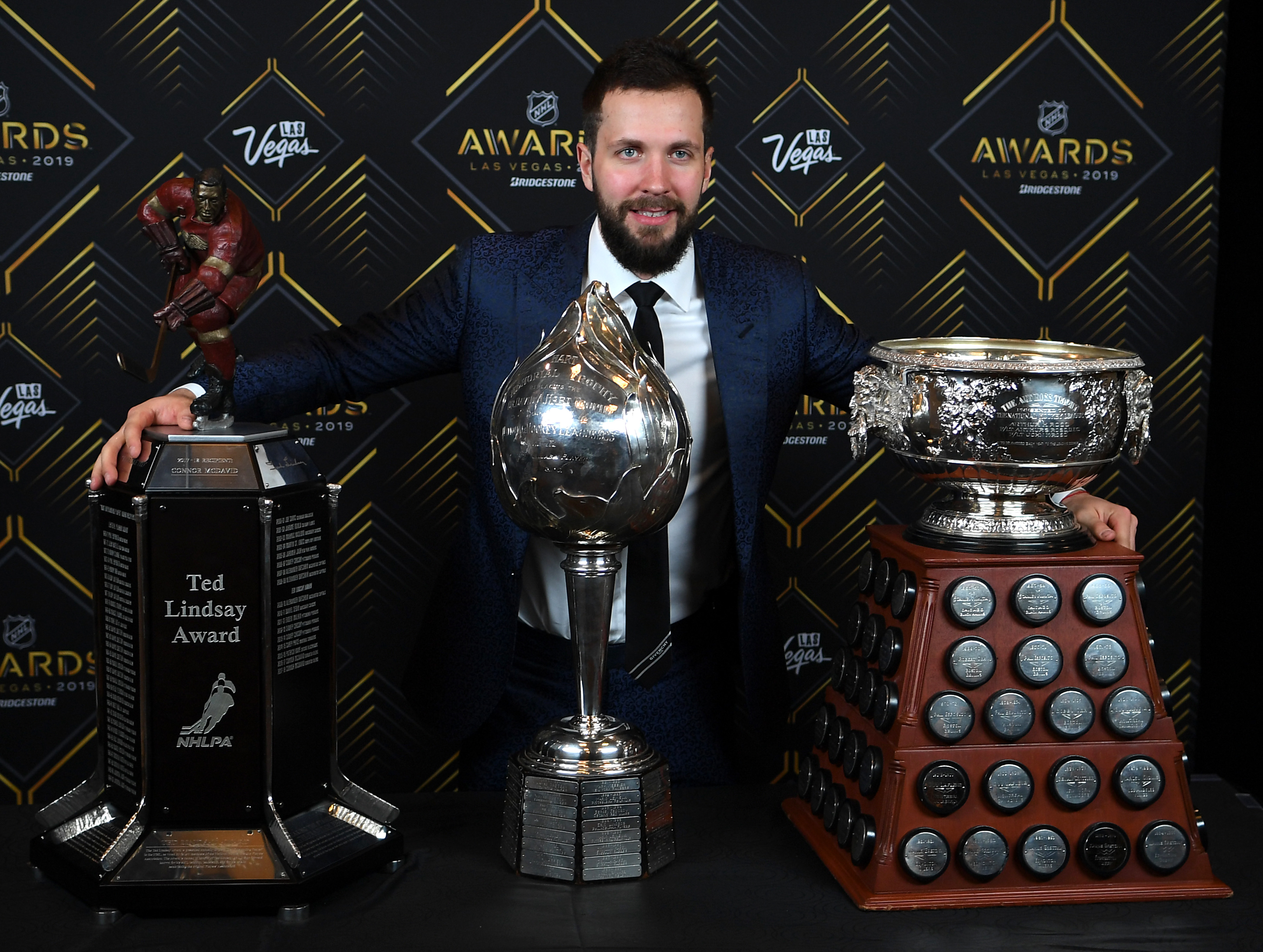 Prior to the entry draft and free agent frenzy, the NHL took a break to celebrate its best players by handing out the leagues 2019 awards,

After dominating the regular season, the Tampa Bay Lightning brought home a trunk full of hardware at the NHL Awards show on Wednesday evening. Goaltender Andrei Vasilevskiy snagged the Vezina Trophy, while teammate Nikita Kucherov won the Ted Lindsay Award and was named MVP, winning the Hart Trophy, which he won by earning 164 first-place votes. Kucherov had already earned the Art Ross Trophy after leading the NHL with 128 points this season.

Here is the full list of finalists and winners.

Winner: Nikita Kucherov (Lightning) — Winner of the Ted Lindsay Award and the Hart, Kucherov ends a phenomenal season with two of the top awards.

Winner: Andrei Vasilevskiy (Lightning) — He is only the second Russian-born goalie to win the Vezina Trophy.

Norris Trophy: Given to the defenseman who demonstrates throughout the season the greatest all-around ability in the position.Brent Burns, Mark Giordano, Victor Hedman.

Selke Trophy: Given to the forward who best excels in the defensive aspects of the game.Patrice Bergeron, Ryan O’Reilly, Mark Stone.

Ted Lindsay Award: Given to the “most outstanding player” in the NHL. Connor McDavid, Patrick Kane, Nikita Kucherov.

Winner: Nikita Kucherov (Lightning) — With an amazing 128 points this season, Kucherov was an easy choice as voted on by the NHLPA.

Calder Trophy – Given to the player selected as the most proficient in his first year of competition in the NHL: Elias Pettersson, Jordan Binnington, Rasmus Dahlin.

Winner: Elias Pettersson (Canucks) — The Canucks center had an outstanding rookie campaign. He scored 28 goals and earned 66 points in 71 games.

Lady Byng Trophy: Given to the player adjudged to have exhibited the best type of sportsmanship and gentlemanly conduct combined with a high standard of playing ability.Aleksander Barkov, Sean Monahan, Ryan O’Reilly.

Winner: Aleksander Barkov (Panthers) — Barkov had four minor penalties this past season, all while earning 96 points.

King Clancy Memorial Trophy: Given to the player who best exemplifies leadership on and off the ice and has made a noteworthy humanitarian contribution in his community.Oliver Ekman-Larsson, Jason Zucker, Henrik Lundqvist.

Masterton Trophy: Given to the player who best exemplifies the qualities of perseverance, sportsmanship, and dedication to hockey.Nick Foligno, Robin Lehner, Joe Thornton.

GM Of The Year: Presented to recognize the work of the league’s GMs.Doug Armstrong, Don Sweeney, Don Waddell.

Winner: Don Sweeney  (Bruins)— This is Sweeney’s first-ever NHL award. He constructed the Bruins roster that was one game away from the Stanley Cup.