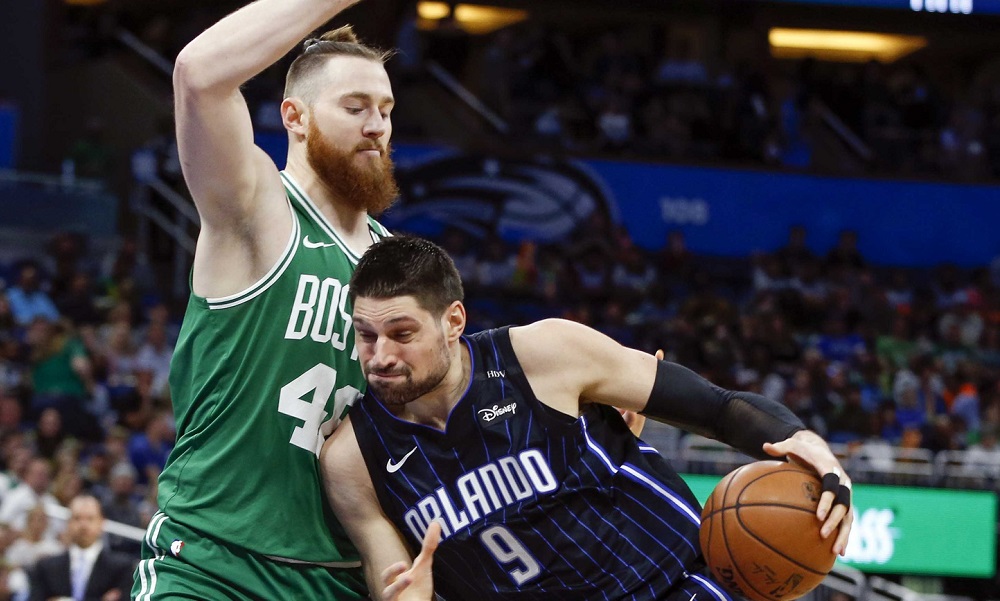 The Celtics said goodbye to a key cog in their locker room and elite defense over the last two seasons when they traded Aron Baynes to the Suns along with the 24th overall pick in the 2019 NBA Draft Thursday night. Boston received a protected 2020 first round pick from the Bucks in return.

With the likely departures of Kyrie Irving and Al Horford, the Celtics can expect to have $25.8 million in cap space heading into free agency, according to ESPN’s Bobby Marks. If the Celtics renounce the rights to restricted free agent Terry Rozier, they can create up to $34 million in space.

While this probably wasn’t the preferred path for the Celtics to take following a disappointing 2018-19 season, this amount of money leaves them with a lot of options on how to build the team moving forward.

During the latter part of the second round of the draft, Adrian Wojnarowski said the Celtics and Lakers are potential landing spots for free agent center Nikola Vucevic if he can’t re-work a contract with the Magic.

Shams Charania echoed Boston’s interest in Vucevic after the draft as well.

“I’m told that Nikola Vucevic is going to be one of the top priorities potentially for the Boston Celtics in July, and for the Celtics that meant shedding some salary and now they can prioritize signing a big man to replace Al Horford and also try to prioritize Terry Rozier, who’s a restricted free agent in July.”

Vucevic had a career-year in 2018-19, averaging 20.8 points, 3.8 assists and 12 rebounds on 51.8 percent from the floor and 36.4 percent from three. Vucevic earned himself his first All-Star selection and lead the Magic to the playoffs before getting bounced in the first round by the eventual champion Raptors.

Last night’s draft certainly wasn’t boring. Amidst the chaos, one thing became clear: This is the young guys’ team now. Tatum, Brown, Smart and Hayward will drive the bus. But many questions remain about the rest of the roster, and about how competitive the Celtics will be in the East next season.

The Celtics went into the draft with three first-round picks and one second-rounder. They came out of it with two first-rounders, two second-rounders, good grades for their four selections and their tactics, more salary cap space than before, and a new, tradeable first-round pick next year, but it cost them All of Australia along the way. Chuck M. covered all the details in his post last night.

By pushing off one of the first-round picks until next year, the Celtics will be adding just two guaranteed contracts this season instead of three. That’s a small savings for the salary cap.

What we don’t know, however, is why Danny Ainge launched Baynes into the Sun(s). The big Aussie was one of the most popular Celtics and, more important, one of the most effective. He has consistently ranked among the league’s top defensive bigs, willing to sacrifice his body to protect the rim against Giannis’ soaring dunks and Embiid’s brutish drives.

It was only last week that Baynes opted into his contract for next season, expressing how much he wanted to stay – and win – in Boston. With Al Horford intending to bail, it seemed like Baynes’ size would be even more valuable next season. But yesterday morning, the news broke that the Celtics were willing to part with him to create cap room. Suddenly, he’s already gone, and not to a contender.

The many Celtics fans in Australia are rightly saying Baynes got a raw deal.

Well that sucks for Baynes. 👎🏼

I won’t be needing my league pass subscription next year.

Say it ain’t so. 😪
Nothing but respect for @aronbaynes – the first ever Australian to be a Boston Celtic. pic.twitter.com/1EON9EEMdX

Since the Cs did not draft a big man last night, they are now extremely, ridiculously, astoundingly thin in the front court.

Robert Williams III, at 6-10, is the team’s only true center. Boston also has 6-9 Guerschon Yabusele as well as 6-7 Semi Ojeleye, who has shown the ability to defend bigger players despite his height.

That big-man rotation is simply not going to be enough to compete, let alone complement, Boston’s wing-friendly roster.

However the roster shakes down after free agency, there’s little doubt that it has to be one that includes at least one difference-maker in the frontcourt if the Celtics have any hopes of remaining at least within striking distance of the top teams in the East.

So what’s Danny up to? What’s his objective for creating all this room for salaries, potentially enough to handle a free agency max contract? Check the list of available free agents. There are some big targets, such as Kemba Walker, Jimmy Butler, and even, as Brian Scalabrine suggested on the NBC Sports Boston draft show last night, Kevin Durant. It doesn’t hurt to ask, and you can’t ask if you’re not under the cap.

However, logic says Ainge is probably going after Vucevic. From the above article:

The 7-foot Vucevic, coming off a season in which he was named to his first All-Star Game, is likely to garner a starting salary around $20-$25 million, which Boston is in a better position to absorb in part because of the Baynes trade.

With $34 million in cap space, Danny could sign Vucevic and still have leeway to snag a second, lower-level free agent – or he could simply re-sign Rozier (don’t shoot the messenger!). But is Vucevic the right way to go?

The problem for the Celtics is whether they will actually be competitive to land the guys that are worthy of a max free agent deal. Shams Charamia of Stadium connected the Celtics to Magic big man Nikola Vucevic as a potential suitor to fill their huge hole in the middle, but there will be plenty of competition for the big man. How much Vucevic could even push the needle for this Celtics squad is also very much subject to debate and the same will go for his price tag. The team may be better off going alternate routes, including stepping back for a year to reload assets by renting out cap room but Ainge sounds like someone who wants to be mix for top tier names this July, at least to start.

Boston Sports Journal: A lack of clarity comes into focus for Celtics future on draft night

Another possibility: Danny’s targeting Steven Adams, who the Thunder have made available as a salary dump.

Probably a coincidence but Steven Adams is due to make……. $25.8m next season. https://t.co/cGR6ay5HHx

I would much rather take Steven Adams for two years than sign Vucevic for four. MUCH rather.

“I shouldn’t really comment on anything until things are done. I really can’t comment on all the things that are said to have happened yet, unfortunately,” Ainge said. “Need to wait. I wish I could. I wish I didn’t have to have my counsel here to protect me from getting fined. I wish I could tell you everything I know, but I can’t.”

It won’t be until Irving and Horford both opt out and leave that Ainge can officially talk about how it all went down. As of right now, both can come back to Boston as if nothing happened. Whether Ainge is holding out some hope that they might or just biding his time until his teeth can release his tongue, Ainge has to be vague.

“I don’t know what exactly the team is going to look like when it’s all done,” he said. “But free agency starts in 10 days or so and we’ll have more answers then. But I really like the core group of players that we have.”

MassLive: Danny Ainge forced to stay quiet as Boston Celtics roster unravels: ‘I wish I could tell you everything I know, but I can’t’

Ainge is completely unpredictable. We can guess what his plan might be, but we won’t know until we know. As always with Danny, expect the unexpected.

On Page 2: Closer look at the picks

Not many people saw the Romeo Langford pick coming, but this wise man did:

Tommy’s hand written draft notes. Look who is number one on Tommy’s list. Romeo Langford. Guess he knows a thing or two about basketball. pic.twitter.com/TAOgn41tme

Here’s some background on the 14th pick.

The Celtics are selecting Romeo Langford with the 14th pick of the NBA draft, per source. Langford did not complete any pre-draft workouts, due to injury, but said he'll be ready for summer league.

Romeo Langford was a top-5 prospect in a lot of spots before this season began. Tough year and injuries brought his stock down after one year in Indiana but C's betting on reaching potential here. @RyanMahanna compares it to Avery Bradley bet in 2010.

Indiana 💚 from Brad Stevens to Romeo Langford. Coach Stevens shares his thoughts on the No. 14 pick & how he expects him to rebound back from a thumb injury pic.twitter.com/crzPilBWh9

Fresh off being selected at 14, introducing Romeo Langford #CelticsDraft pic.twitter.com/QDYUBaDjiC

And here’s a quick opinion from a hard-core Indiana fan.

Would score 12 points in 5 minutes. Then disappear for a time. Shot needs work but was that thumb related? Has to be a little i would think. Great gamble to me at 14.

Man i’m blessed and honored to be apart of the most historic franchise in the league. Ready to give it my all and work my tail off! Let’s go Celtics!!! #GreenTeam https://t.co/ygBNPkN3c9

But, Williams is just too perfect for the Celtics to dislike the pick. He’s a hard worker who excels on the offensive boards and gets more out of his smaller frame than just about anyone in this draft. Brad Stevens will absolutely love this guy. And, he is a better shooter than people give him credit for, which also fills a need for Boston. The Celtics need shooting and Williams gives them that. It’s really hard to dislike this pick.

Sports Illustrated: NBA Draft 2019: The best and worst picks of the first round

Pick no. 33, Carsen Edwards, looking like a right-handed Isaiah Thomas against Hunter, the Virginia star who was the fourth overall pick last night.

I mean, what is this?

Carsen Edwards is 6'0". De'Andre Hunter is 6'8" and he had Edwards the entire second half. And Edwards just did this. pic.twitter.com/sQy8xPuNjV

And at no. 51, point guard Tremont Waters.

My unofficial review of Twitter revealed a mostly positive response to the players Boston selected. That was confirmed by the godfather of Weird Celtics Twitter:

Romeo, Grantwilliam and Carsenedwards is a solid fun night after a shitty year.

Boston Sports Journal: Everything you need to know about the Celtics draft picks

Globe: Meet the newest Celtics, Romeo Langford and Grant Williams  |  NBA Draft represents a fresh start for the Celtics after a season to forget  |  The draft was a start, but the Celtics’ future hinges on what Danny Ainge does next

And, finally… The Baynes Fan Club has a message for Danny Ainge

Herald: Celtics becoming less talented but more likable (not sure how losing Horford and Baynes makes the Cs more likable, but okay)