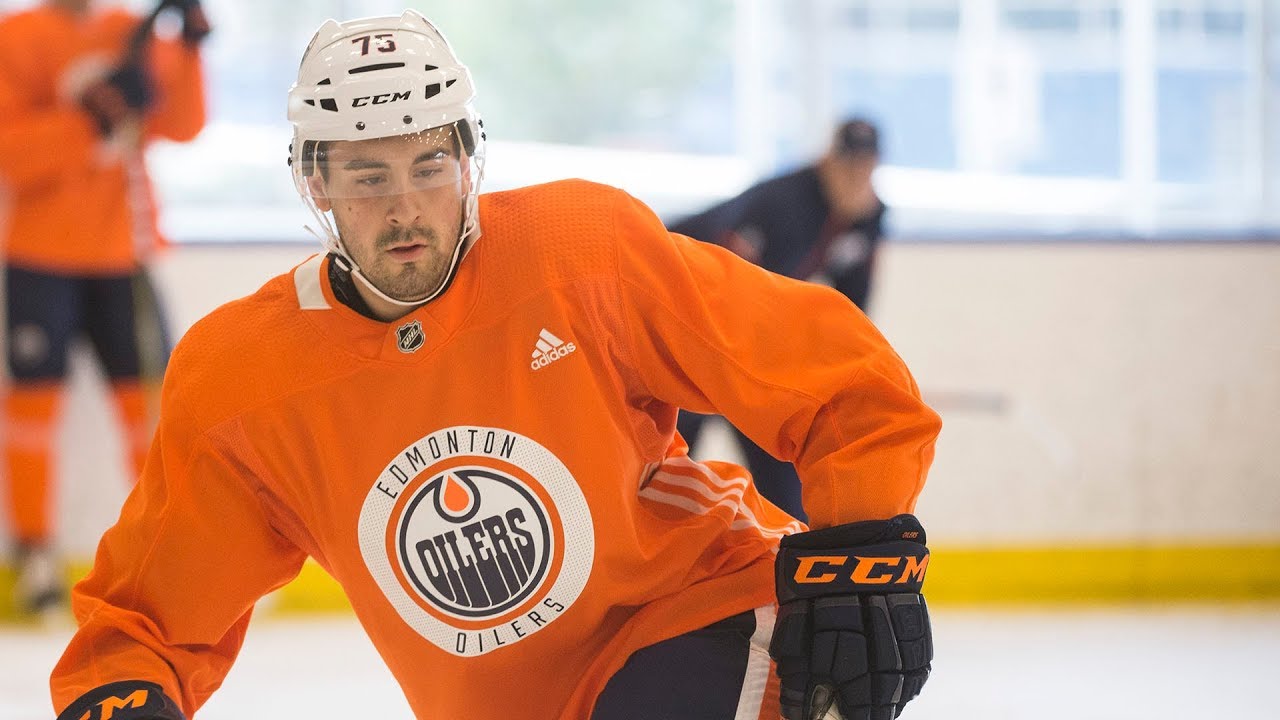 The Edmonton Oilers left Vancouver yesterday with six new prospects selected over the course of two days. Edmonton opened their weekend with the selection of Philip Broberg 8th overall, then added another first-round talent in Raphael Lavoie with the 38th overall pick.

The initial reaction to Edmonton’s draft class is mixed. On paper, the Oilers did pretty well. They got two first round talents and added a goaltender with outstanding numbers in the KHL at just 20 years-old. The bottom line? We won’t know about the 2019 Edmonton Oilers draft class for at least three years, likely longer.

With the draft now behind us and development camp kicking off tomorrow in Edmonton, today is as good of a time as ever to take a look at the top ten prospects in the Edmonton Oilers system.

1.) D Evan Bouchard: The big right-shot defender is still the best prospect that Edmonton has to offer. He’s got insane offensive instincts, great puck moving ability and can run a powerplay. He didn’t look lost in his brief NHL cameo early last season, destroyed the OHL yet again with London, and thrived in a depth role for Bakersfield in the AHL playoffs.

It was a wild season for Bouchard, but for me it just cemented the fact that this is a future top-four defender. In fact, I still believe that Bouchard has the potential to be a top-pairing blueliner in due time.

He’ll turn pro this fall, and expectations are that he will start the season with AHL Bakersfield. Bouchard surely will get some NHL games this season and is very close to breaking into the league.

2.) D Philip Broberg: Broberg checks in at number two just days after being draft by the club. A left-shot D, Broberg is likely two or three seasons away from making the NHL. He’s got great speed and size, and has routinely dominated his age group.

After playing 2018-19 in Sweden with AIK, Broberg could come to North America and play for the Hamilton Bulldogs of the OHL in 2019-20. Edmonton could also sign him and stick him in AHL Bakersfield, but that seems unlikely.

Broberg’s compete-level is high and he does posses great skill. The biggest problem here? Scouts question his hockey IQ and decision making. He’s got potential to be an absolute stud, but most scouts think he eventually settles in as a top-four defender. Not bad.

3.) D Caleb Jones: See a trend? The Oilers are absolutely drunk with defensive prospects. Jones combines speed, skill and puck moving ability into a strong package that makes him a future NHL’er. He looked solid in a 17-game NHL stint during the 2018-19 season, and many believe he is ready to make the jump full-time now.

Jones improved his defensive game in a big way in 2018-19, and became a more well-rounded player that seems destined to play on either the second or third pairing of an NHL blueline. I believe he will arrive on a full-time basis during the 2019-20 season, perhaps even on opening night.

4) LW Tyler Benson: I don’t think Benson has the ability to be a first line forward in the NHL, but he’s going to be a solid middle-six forward when all is said and done. Finally with the gift of good health, Benson exploded in his rookie pro season and posted boxcars of 15-51-66 in 68 games for AHL Bakersfield.

He’s got good hockey sense and plays a two-way game that will allow him to contribute in a few different ways once he reaches Edmonton’s lineup. Like Jones, I expect Benson to make the jump at some point during the 2019-20 season. He’s another candidate to make the roster on opening night.

5.) C Cooper Marody: In the end, I’m not so sure Marody plays center in the NHL. He’s got talent, however, and should make the league within the next two seasons. The only thing holding him back? His speed, which has to improve if he wants to be a top-six forward in the NHL.

In his rookie pro season, Marody registered 19-45-64 in 58 games for AHL Bakersfield. He’s a threat on the powerplay and was one of the Condors’ most consistent five-on-five scorers. Like Benson, Marody very well could settle in as a strong secondary scorer who contributes from a middle-six role.

6.) D Dmitri Samorukov: The Russian defender spiked in a major way during his final junior season with OHL Guelph. He registered 10-35-45 in 59 regular season games, then added 28 points (10-18-28) in 24 playoff contests. Samorukov, simply put, was a stud for the Storm.

He turns pro full-time this fall, and will almost surely start his career with AHL Bakersfield. Many scouts believe that he is closer to the NHL than anyone thinks, which could bode well for an Edmonton team in need of cheap talent.

Samorukov was more known for his defensive game on draft day. If an offensive element has emerged, he could end up as a real steal.

7.) D Ethan Bear: Amazing what a year can do, huh? If this were the day after the 2018 Draft, Bear would likely be inside the top three prospects in the organization. An injury-filled 2018-19 sees him slide down the list a little.

Don’t be fooled though, Bear is still a very good prospect who has an NHL future. Also worth noting that defenders never develop in a straight line. The right-shot defender can play the point on the powerplay, moves the puck extremely well and has a big shot.

His future might not be in Edmonton, however. The Oilers have a surplus of defensive prospects and Bear could be a good trade candidate to fill a hole elsewhere.

8.) F Ryan McLeod: McLeod is another 2018 draft pick that will turn pro this season. Known for his two-way ability, the reason McLeod fell to the second round a year ago was his inconsistent offense. The 2018-19 season didn’t do much to quell those concerns.

He showed well in the Calder Cup Playoffs, however, registering three assists in five games for the Condors. If the offense can consistently show up, McLeod could be a second line center. More likely? He settles in as a third line pivot down the line.

9.) C Raphael Lavoie: The big right-shot center checks in at number nine just a day after being selected 38th overall. I thought Lavoie would go in the first round, so the Oil actually got pretty good value snagging him on day 2. He’s got skill, size and speed, but is an inconsistent forward with some work ethic questions.

10.) RW Kailer Yamamoto: It’s been a tough road for Edmonton’s 2017 first round pick. His rookie season did not go according to plan, and injury issues have hampered him. Yamamoto managed just two points (1-1-2) in 17 NHL games in 2018-19. His AHL numbers were better, but not where you want to see them. He had 18 points (10-8-18) in 27 games. Yamamoto had a wrist injury that hampered him throughout the second half of the season and kept him out of the playoffs.

He’s still got speed and skill, however, and is a key cog in Edmonton’s future. I expect he starts the 2019-20 season in Bakersfield on the top-line.