Driven Into Darkness By A Caravan Of Clowns 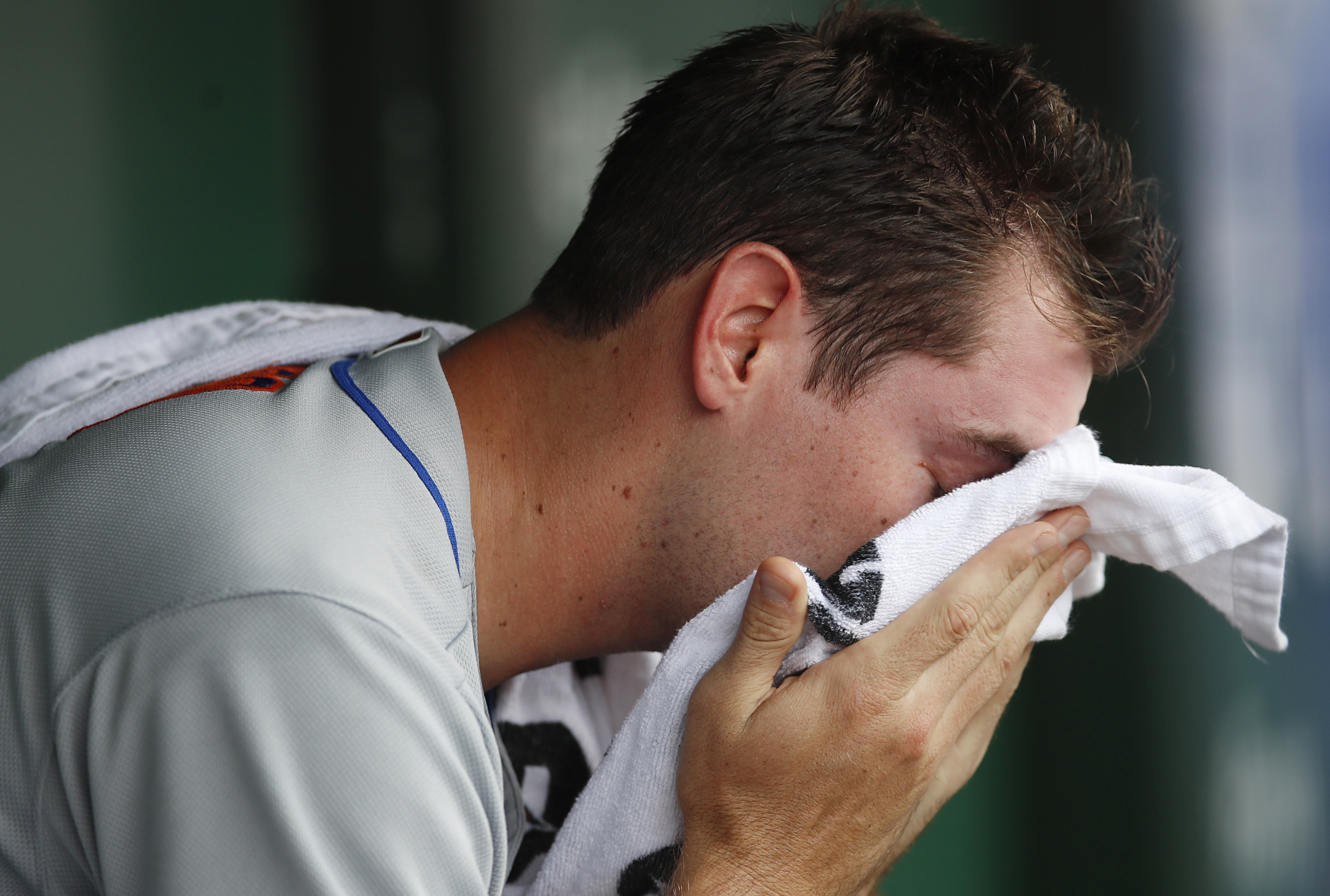 Driven Into Darkness By A Caravan Of Clowns

I suppose we should go about this chronologically, shall we?

First, the Mets trotted out a lineup on Sunday that could only be described as “the B lineup.” Okay, fine. Players need rest, and there are pre-determined plans. I get it. But in the midst of this important stretch of games with a chance to take three out of four from a division leader on the road, I would have at least thought Handsome Art Howe would have flipped some of his scheduled days off around so that the lineup wasn’t a wasteland after the fourth spot.

I never complain about lineups. But even I got snarky …

Oh, and this lineup against Hamels? pic.twitter.com/WrcF2UWjsz

I was far from the only one, but as always we were glad to be a little bit wrong when the Mets took a 3-1 lead in the fifth, thanks in part to a Tomas Nido solo home run. (I’d bet dollars to donuts that Nido catching deGrom was the least of anybody’s worries with the lineup.) That’s when the official Mets account decided to throw a little shade our way.

This video is for the hundreds of people who commented on our lineup post this morning. #LGM pic.twitter.com/mKU7nwZlfh

First off, maybe it’s not such a great idea to antagonize the people that care enough about your lineups to critique them. To that point, if the “everything is wonderful, stop criticizing the team” crowd is the only crowd you want following the team, then let me know now so I can spend my disposable income elsewhere.

Also, you know how many hits the Mets had since that home run?

Both were later in that inning, and one was by Jacob deGrom (who had another win stolen from him, but more on that later). Since the fifth inning, zero hits. Zero. Oh, but you sure showed us on twitter dot com, didn’t ya!!!

All right, so let’s go to the Seth Lugo portion of the game, and this is my biggest problem with Handsome Art Howe, and it isn’t all his fault (I’ve probably gone into this before so forgive me if I’m being repetitive, but it still applies): Handsome Art was presented to us as a pitching guru, who comes up with unique solutions to maximize bullpen effectiveness. But what he has morphed into, and in many ways what he’s been forced into, is a manager who when he has a lead, goes to Plan A without having a Plan B until the lead is lost. deGrom leaving in the sixth with a torn callous in his foot didn’t help, but Callaway’s plan, clearly, was to use Lugo for two and Edwin Diaz for the ninth.

Lugo threw 20 pitches in the 7th and was fortunate enough to get out of it with a double play. Then Lugo was sent back out to face the top of the Cubs order in the 8th. He was clearly running out of gas. Gary Cohen had mentioned that this would have been a good time to bring a lefty in to face Anthony Rizzo. Fine, but of the three lefties that the Mets could have had who Rizzo has faced before, he’s hitting .357 off them (Justin Wilson, Daniel Zamora, and Luis Avilan.) Rizzo is actually hitting .429 off Lugo, so there weren’t a lot of options.

But Robert Gsellman, who was warming up in the bullpen, has only given up a hit in four AB’s to Rizzo and more importantly, he was fresh. Callaway could have also had Gsellman pitch the 7th against the bottom of the order and had a fresh Lugo face the top of the order in the 8th. I mean, that’s the kind of bullpen usage we were promised, right? Best relievers against the most important hitters? Diaz could have even come in a little early (I know I know … the plan.) Even with the bare cupboard that Brodie left him, Handsome Art could have found an alternate route instead of driving down the same road over and over again.

The end of the road was predictable: A three run HR by Javy Baez off Lugo to give the Cubs the victory, and deny the Mets a road series victory in a game that they seem to lose too many times since 2006.

So now let’s get to the post game shenanigans (something WPIX didn’t do in their 10PM sportscast, which is absurd.) To summarize Deesha Thosar’s timeline, Mickey Callaway got a little testy at Matt Ehalt for harping on why Diaz didn’t come in early, so it was clear that Callaway was a little upset. But then … and this is important … changed into his street clothes before walking by Tim Healey of Newsday who said:

That was when Mickey launched into “don’t be a wise-ass” and let loose with more “motherf***ers” than Samuel L. Jackson in Manitoba before asking the Mets public relations staff to remove Healey from the clubhouse.

Here’s as far as my sympathy goes with Callaway: He’s had a bad week. He lost his pitching coach in a move which was clearly done to “send a message” in an era where that shit doesn’t work anymore. I get that he probably feels that the walls are closing in on him. I’ve lost friends professionally and they haven’t been replaced. Trust me, I’ve gone to some dark places since then and there are a lot of nights I feel like I’m still there, with the walls still closing in. You just do the best you can and charge through. So I think I understand what Mickey is going through, if that is indeed a factor in what set him off on Sunday.

But managers (and all people really) show their true selves in the worst of times. If this is what Mickey Callaway is when things get a little rough, how can anybody take him seriously when times are good? He can’t call a co-worker a “motherf***er”. And he can’t survive this. If I at anytime called the UPS person or the food delivery person a “motherf***er” for any reason, I’d be gone, and I’d deserve it. That’s basically what Callaway did. He called out a person who wasn’t an employee of the Mets who still has a job do to among the confines of the team. And sorry, the days of Earl Weaver are long gone, so letting loose on a reporter with that language when you’re clearly away from the heat of battle is inexcusable. Especially when you’ve had time to cool down and put on your civvies. That combined with his eroding skills as a manager might get him canned by the time you wake up and read this.

Hearing the Mets will address today's postgame clubhouse incident sometime on Monday. Van Wagenen is expected to be in Philadelphia.

All this was followed by Jason Vargas staring down Healey in the clubhouse and trying to pick a fight with him, saying “I’ll knock you the f*** out, bro”. First off, Vargas isn’t the one I would have expected to threaten to knock somebody out (what would Vargas show a reporter … Apple Valley, CA?) Second, people take cues from their leaders. Callaway going bonkers gave others the moral high ground to go bonkers as well. Vargas went bonkers on the cues of his manager. Mickey created this. And it isn’t a rallying cry. It’s a cry for help.

Now, as usual, the Mets are a laughingstock. I’ve tried to give Handsome Art Howe every benefit of the doubt but I think that he’s used his last one. The Mets want so desperately to not pay a manager not to manage, but there may not be any other choice but to make a change, or else admit that you’ve given up on the season. Brodie and Jeffy wanted blood, well now they have it. They took away his pitching coach hoping they’d get Bobby Valentine, and instead they got Bobby Bonilla. So either he’s gone, or we know once and for all that ownership has officially checked out and are more worried about management over at NY Excelsior.

But remember Brodie, that if you send the sharks for the blood, then it becomes your pool. Then it’s sink, swim, or eventually drown at the hands of your overlord. And if you annex the pool remember … you asked for it.