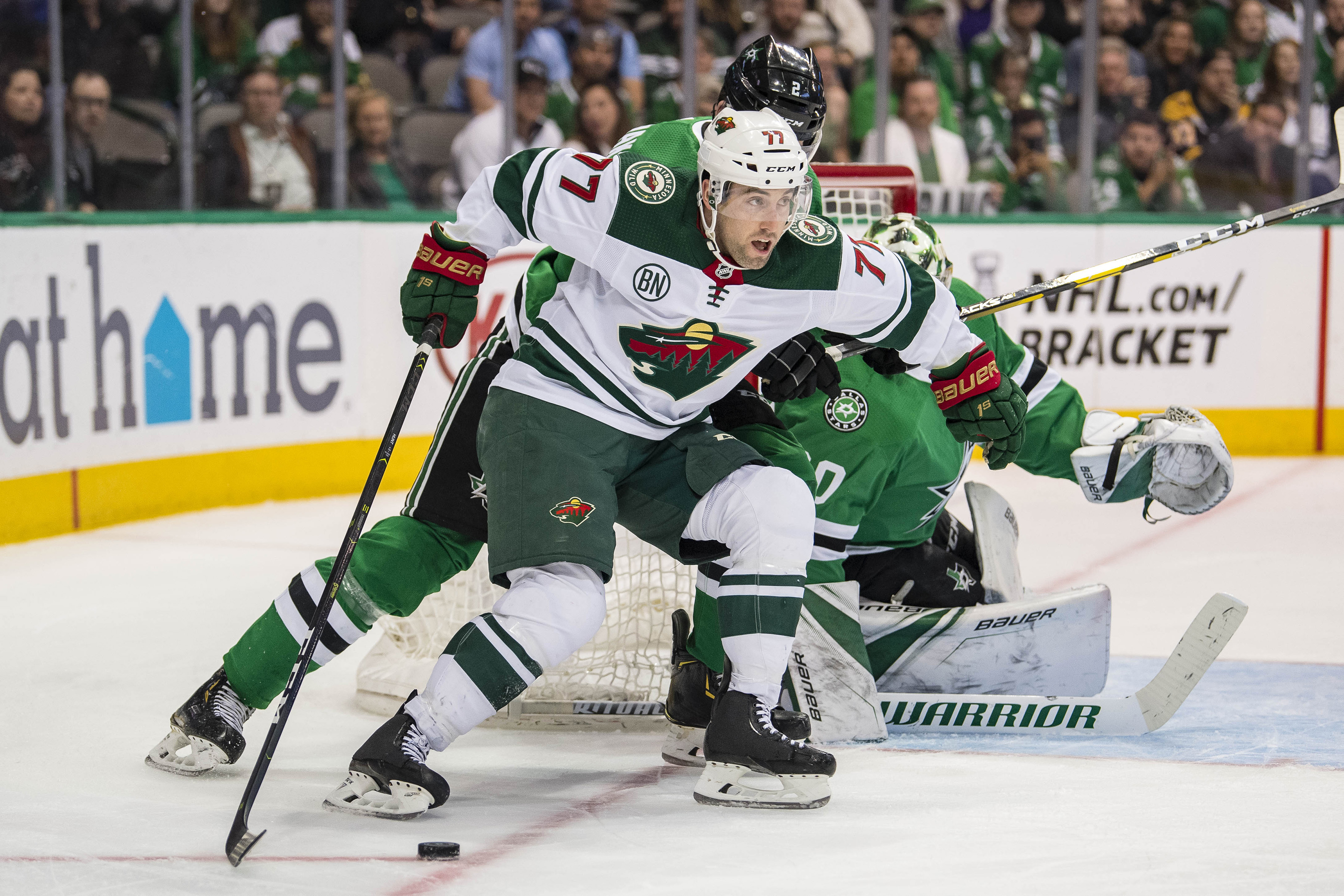 I am sure on some level, the current state of the Minnesota Wild feels like a strange weather forecast.  An organization, who missed the playoffs for the first time in six seasons is predicting a bit of a storm to take place in early July as the team hopes to put itself back into contention.  But like a weather forecast, life experience will tell you that for every ‘polar vortex’ and ‘heavy storm’ that is predicted to take place what actually arrives is far less eventful or noteworthy as the thunderstorm turns out to be light, occasional rain and the feared polar vortex is simply a dusting of snow.  I wonder, is that what Wild fans will feel like this summer if implied changes don’t amount to much beyond a few mild roster moves?

The Minnesota Wild re-signed defenseman Brad Hunt to a two-year, one-way contract on Saturday worth $1.4 million.  The former Bemidji State star played well in his time with the big club after we acquired him along with a 6th round pick from the Vegas Golden Knights in exchange for a 5th round pick.  The soon-to-be 31-year defenseman had 5 goals, 12 points, 8 PIM’s in games split between the Wild and the Golden Knights last season.

The signing is for a sensible amount for a player who I think could contribute both at even strength and on the power play and the term makes sense as well.  In fact, I really hope he gets a chance to showcase more of his offensive ability as has great instincts and a heavy shot which seems to give goaltenders a lot of trouble.  However, just checking out CapFriendly, with Hunt’s signing the Wild now have 7 defenseman under one-way contracts.  Unless it decides to trade a defenseman, it would seem the team’s blueline is set.  That means there is little or no chance for Louie Belpedio, Carson Soucy or Brennan Menell to get a chance to make the big club.  All three of those players have been good soldiers in Iowa for at least a season or more.  But there have been rumblings the team may look to trade Nick Seeler or Greg Pateryn so those younger defenseman still may have a chance to battle for a roster spot or two.

While Jonas Brodin always appears to be the name mentioned in trade discussions about the Minnesota Wild, perhaps the more likely candidate this time around is Jared Spurgeon.  Spurgeon who is about to enter the last year his contract which pays him $5.18 million this season.  Talks have only recently begun between Wild General Manager Paul Fenton and Spurgeon and his agent Eustace King.

While the talks have not focused on money and term yet, it has been reported by Michael Russo of the Athletic that other moves made by the Wild in the next few weeks will have an impact on whether Spurgeon chooses to re-sign or not.  In otherwords, he wants to see the team make some improvements to be a playoff contender once again and doesn’t want to tie himself down to a team that he perceives to be spinning its wheels or getting worse.  Jason Zucker, another Wild player whom the team has appeared to be shopping is a good friend Spurgeon and the two players both have the same agent.

If Zucker gets dealt, its hard to see how that doesn’t push Spurgeon to want to seek greener pastures elsewhere.  Yet Fenton did appear to pump the breaks on the possible trade of the popular winger when asked about it this weekend and when Zucker didn’t get traded at the draft as some had expected now it looks like he may start the season with the Wild afterall.  Either way, its hard to imagine that relationship between the King Clancy Award winner Zucker and Fenton being anything but a bit strained or at the very least a little awkward.  Yet the fact of the matter is the situation with Zucker likely effects Spurgeon’s decision to re-sign as well and the team will need to consider that as talks progress.

To keep with our forecast theme at the start of the article, this week will be the ‘calm before the storm’ as NHL free agency sets itself to begin on July 1st.  With the announcement of the NHL salary cap being $81.5 million this season, the Wild have a little over $19 million in cap space to work with.  The team does have a number of restricted free agent signings to work out with Kevin Fiala, Joel Eriksson Ek, Ryan Donato and Nico Sturm but most of them should be fairly affordable bridge-type of contracts.  So that leaves the team some space to sign more of an impact forward, most likely a right-shot forward in free agency.  Who are the likely candidates?

Joe Pavelski is probably the most likely candidate, as the 34-year old is coming off an 38-goal, 64-point season.  The Plover, Wisconsin-native isn’t the fastest skater but he’s a proven finisher (and a right shot) but the real question is how much money and how long a term will he be seeking.  Near the deadline, the mantra from Paul Fenton was to get ‘younger and faster’ and adding another forward in his mid-30’s seems to fly in the face of that.  Rumor has it, he’s also shown some interest in playing for Chicago as well.  And considering Pavelski made $6 million this season and scored 38-goals it seems unlikely he’d want to take any kind of a haircut on his salary.

Another option would be Gustav Nyquist, a versatile player who can either play left or right wing.  The 29-year old brings some speed and creativity but he’s a notoriously streaky player.  Nyquist is also a left shot but since he can play on either the right or left side it would give the team perhaps a bit more flexibility in its top 9.  Fellow San Jose Shark who can also playing either left or right wing is Joonas Donskoi is another player Michael Russo has mentioned numerous times on his Talk North podcast, but does the Wild really want to add a player who went 41-games without scoring a goal this season?   The 27-year old right shot winger might be a more affordable option, but he’s also less likely to boost the Wild’s pop-gun attack even if he could step in be a workhorse on the penalty kill right away.

Brett Connolly is another player mentioned by Russo as a possible target, as he had 22 goals playing on Washington’s bottom-6 last season.  He brings an element of size and strength as well as scoring ability which might be something that intrigues Fenton.  Edina-native Anders Lee has been mentioned a lot by Russo and others as a prime free agency target, but why would he want to leave a promising organization like the New York Islanders to go to a reclamation project like Minnesota?  I understand the whole local angle, but I just think the Wild are probably a hard sell to almost any free agent right now.

Other right shot forwards that are available are Thomas Vanek and Jason Pominville?!?!  I kid, I kid (but really, they are available!)  Power forward Wayne Simmonds is coming off a rough season where he managed 17 goals between the Philadelphia Flyers and Nashville Predators and may be had on a more affordable, short-term ‘prove it’ type of deal the Wild managed to get from Eric Staal a few years ago.  The 30-year old Simmonds would help give the team an additional player who isn’t afraid to camp out near the crease and provides some sandpaper to help a roster that is traditionally pretty passive.

As much as we would like to think of our team is still a ‘destination city’ for NHL players I don’t think that has much of an influence these days.  The reports of locker room malaise and a strange mix of older and very young players to say nothing of its struggles on the ice has to make any free agent hesitate.  While I think the quality of life and hockey culture is probably inviting, the truth is this team is likely going to struggle for at least a few more seasons.  Even alternate captain Zach Parise is apparently unhappy and wondering if the team is going backwards, and he knows he’s probably stuck with this team even if he was willing to waive his no-movement clause.

So as much as Minnesota Wild fans may wish to see a storm of activity.  I think there is a fair chance we’ll see just a few minor moves and that the roster that finished out of the playoffs last year will look much the same to start the 2019-20 season.  But make no mistake, the well publicized issues with season ticket sales being down will no doubt add some significant pressure for the team to make some kind of splash.  While the team may be selling its fans the idea of a major storm, expect intermittent sprinkles instead.