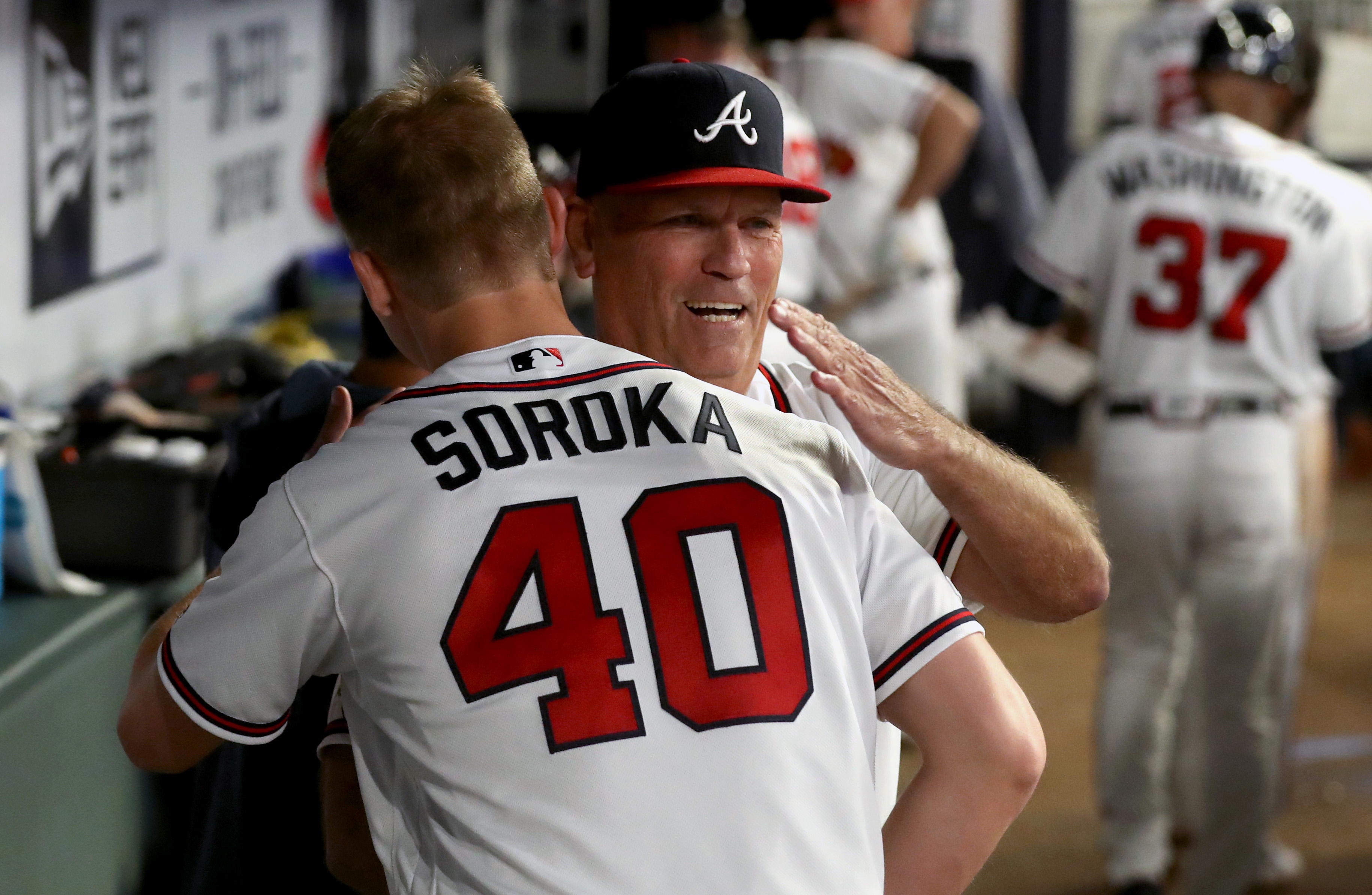 In the fall of 2016, there was a good deal of conversation regarding the managerial position in Atlanta. Earlier that season, the Braves fired Bobby Cox’s hand-picked successor, Fredi Gonzalez, and put minor league lifer Brian Snitker in charge. The Braves rebounded after a 9-28 start under Gonzalez to finished 59-65 after the firing. Nevertheless, the belief was that Atlanta would seek out a more-established manager for their building nucleus of young talent. Conversely, they might seek out a younger manager to grow with their players. Either way, Snitker’s days looked numbered.

One favorite was Bud Black, the long-time Padres manager who was fired by San Diego in 2015 during his ninth season with the team he used to pitch for. Black’s Padres had never made the playoffs and only finished with a winning record twice before he was let go. Another possibility was Ron Washington, who had a tumultuous ending to his nearly eight years at the helm in Texas, which included a World Series appearance in back-to-back seasons. Other possibilities included Terry Pendleton and Eddie Perez, who both played and coached for Bobby Cox.

People like me – analytical nerds – thought the team should be more creative, believing that John Coppolella, then the Braves GM and an outside-the-box thinker, would be best paired with another innovative individual at the helm of the Braves.

One of my favorites was Dave Martinez, then Joe Maddon’s right-hand man and a former Brave himself. Other Braves fans liked Gabe Kapler, who had worked for sabermetric favorite Baseball Prospectus and was a year into a position as Director of Player Development for the Dodgers. There were many other names I could go into, but those two had a number of backers.

More on them later.

Ultimately, the Braves chose to give Snitker a one-year contract with an option for 2018. It was a bit puzzling to make such a minor commitment. Kapler, Martinez, and many others continued in their previous jobs and the 2017 season played itself out. The Braves surprised the league and their fans with their competitive play, even reaching .500 on July 16. Unfortunately, they faded over their last 72 games, winning just 27 of them. Nevertheless, there was a lot of reason for cautious optimism. While he struggled, Dansby Swanson was coming off his first full season in the majors and new double-play partner, Ozzie Albies, arrived over the last two months. The rotation was getting younger with Mike Foltynewicz and Sean Newcomb, plus we witnessed the debuts of Luiz Gohara, A.J. Minter, and Max Fried. Ronald Acuña Jr. was baseball’s top prospect in the minors and Kolby Allard, Mike Soroka, and Kyle Wright looked close to being added to the mix.

As for Snitker, the Braves had a choice to make – though that choice potentially could have been made for them. Snitker and Coppolella didn’t mesh. As the final series played out in Miami to end the 2017 season, Snitker was ready to resign as Braves’ manager. Even if he hadn’t, Coppolella may have decided to move in a different direction. Again, Braves fans thought of other options – including Martinez and Kapler.

Instead, as the season finished, Coppolella was the one that was out. Forced to resign for his role in an international signing scandal, the Braves were now without a general manager. With former Team President John Hart also tainted by the scandal, it seemed like keeping Snitker was a wise decision to bring some level of normalcy back to a team. When Alex Anthopoulos was named the new general manager, he inherited a mess, but at least he didn’t have to replace a manager.

Meanwhile, three new managers started jobs in the NL East. Martinez finally got his shot to manage, replacing Dusty Baker in an unpopular decision in D.C. Kapler got the job with the Phillies, replacing Pete Mackanin, who held the job for two-and-half-years. And in New York, Terry Collins retired following his seventh year with the franchise, which included an NL pennant in 2015. Mickey Calloway, the pitching coach of the Indians for five years, became the new manager.

Suddenly, Snitker – who had considered leaving his position – became the second-longest-tenured manager in the division. But he only had one more year on his deal and at the age 62 and entering the 2018 season with a team that was just beginning to emerge from a rebuild, it seemed unlikely that Snitker would continue as the Braves’ manager for too much longer. The belief was that Anthopoulos likely would ride it out with the manager he inherited for a year hoping the Braves improved and then hire his guy to usher in the new era of a competitive Braves’ squad.

The unlikely happened, though. The Braves reversed their win-loss record of the previous season, this time winning 90 games rather than losing that many. While they would fall in four games to the high-powered Dodgers in the NLDS, they shocked the baseball world by “arriving” ahead of schedule. The Nationals, under Martinez, were supposed to win the division. The Kapler-led Phillies looked like Wild Card contenders. Some even though the Mets, built around an impressive though often hurt pitching staff, could get into the discussion.

But the Nats started slow, the Phillies faded late, and the Mets – after an 11-1 start under Calloway – finished four games under .500.

Yet, the experts mostly agreed that in their second year, the three managers would figure it out. The Phillies spent “stupid money” on Bryce Harper, David Robertson, and Andrew McCutchen – along with trading for J.T. Realmuto. The Nationals lost Harper, but added Patrick Corbin. The Mets, also under a new general manager, signed Wilson Ramos, traded for Robinson Cano and Edwin Diaz, and gave Jacob deGrom a fat extension.

I kid. Yes, they signed Josh Donaldson, Brian McCann, and brought back Nick Markakis, but the offseason felt incomplete. It lacked the wow factor after the Donaldson move. That was reinforced after watching star-after-star land with the Braves’ rivals. Under second-year managers who once frequented the lists of the best managerial candidates in baseball – something Snitker was never considered as – the other three contenders in the NL East were often picked to finish above the Braves. Some experts had all three finishing above the Braves.

As we near the half-way point of the 2019 season, the unlikely event has happened again. There are the Braves – at the top of the heap. The Phillies again started hot behind their shiny new toys, but like Wile E. Coyote when he realizes there’s nothing underneath him, the Phils have fallen back to Earth. The Nationals followed a similar script from 2018 as well, starting slow and are trying to work their way back into contention. Losing 2-of-3 to the Braves during the weekend didn’t help. And keeping with the theme, the Mets looked reborn for about two weeks – before regression set in.

None of these teams are bad. On any given night, they look like the team so many predicted they would be. Max Scherzer is superhuman. As is deGrom. But all three teams suffer from the same problem that we don’t see in Atlanta – a lack of leadership.

Just yesterday, Calloway’s clubhouse nearly came to blows with a reporter from the New York Post. Today, Kapler had his own player, the high-priced Harper, basically laugh off his manager’s idea of implementing a pitching machine that throws curveballs. And while Martinez doesn’t seem to have the same level of drama, he was publicly embarrassed a few weeks ago as he tried to take the ball from Scherzer only to be overruled by the starter.

That doesn’t happen in Atlanta. Nobody laughs about any ideas that Snitker suggests. Julio Teheran isn’t threatening to beat up David O’Brien in the locker room after a tough loss. While pitchers might plead with Snitker to stay in, when he demands the ball, they give it to their manager.

Despite all the things we can be critical about with Snitker – and I have a list – the one thing that all Braves’ fans are in absolute agreement about is that Snitker has the respect from every single member of that locker room. For example, Johan Camargo isn’t happy with his playing time and we all know that. It would almost be understandable if he loafed around a little, grumbled about the lineup, and even talked – off the record – of wanting a trade. But he still plays hard for his manager and for his team. And his manager’s continued belief in him, while not quantifiable, certainly gets validated if he smacks a two-run homer to lead the Braves to an extra-innings win.

You know, the kind of thing that happened yesterday.

When Anthopoulos took over, some of the first things he spoke of weren’t just winning on the field, but off of it. He believed in building culture and in character. This is despite a reputation that is well-earned of putting a premium on analytics, metrics, and applying modern and innovative baseball strategy. He didn’t just hire the best minds to help him shape the 2018 roster and beyond. He hired the people he felt meshed the best.

And despite their different perspectives, Anthopoulos finds a way to mesh well with his old-school manager and that’s a good thing because Snitker’s calm demeanor works well with the rest of the team. Sure, Snitker is a novice when it comes to applying modern baseball strategy and some of his decisions drive me crazy. At the end of the day, though, a baseball manager needs to be first-and-foremost a leader of men. And that is exactly what Snitker is.

And there is something to be said for that leadership when you look into why the Braves have been such a good team late in games. There are practical explanations that we can quantity. We can talk about how many great fastball-hitting players are on the team and how that helps them against relievers who throw at least 50% fastballs. But let’s not ignore that having a leader who is calm, supportive, and positive can go a long way. He’s not trying to manage by some book like Kapler. He’s not going to be overruled by his players like Martinez. He doesn’t lose his mind like Calloway. He, simply, manages. Sometimes, the Braves win. Sometimes, they lose. Sometimes, it rains. But through it all, Snitker is, unquestionably, a man that this team will play hard for.

As the seats under the second-year guys in DC, Flushing, and Philly grow hotter by the day, it’s worth taking a moment to remember that regardless of our different complaints with Snitker, he helps develop a culture that doesn’t allow the outside noise of the media to disrupt the clubhouse. He fights for his players and he believes in his guys. Sometimes to a fault, sure, but considering what the alternatives could have been, I’ll take it.