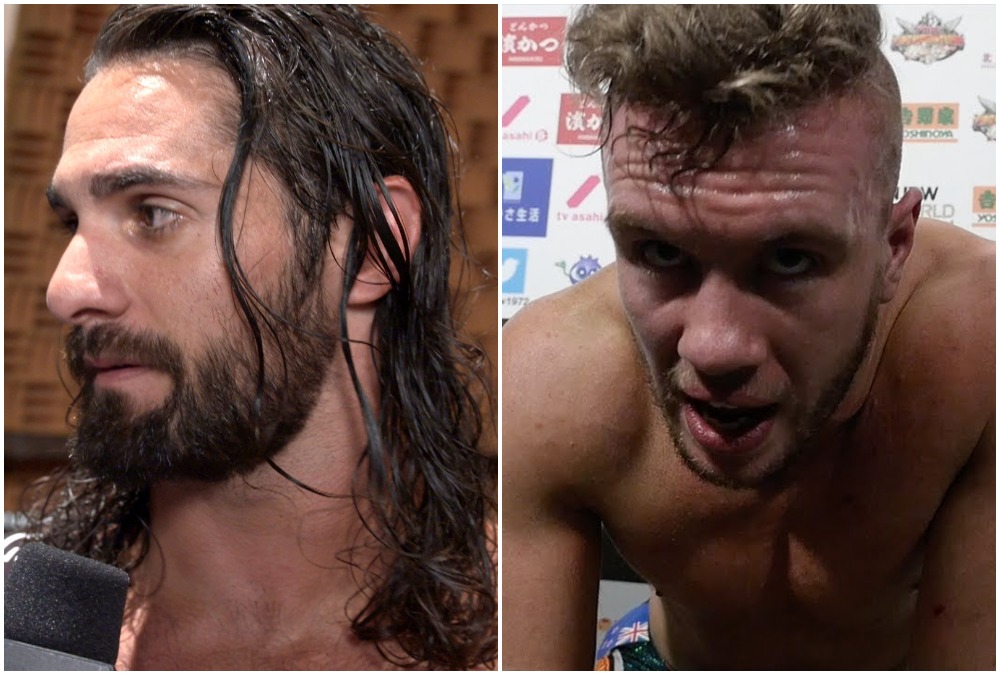 Over the past couple of days, there has been an intense exchange between WWE Universal Champion Seth Rollins and IWGP Junior Heavyweight Champion Will Ospreay.

What started off as a response to a question, led to remarks that did not display a friendly exchange, which is what one of these stars intended it to be initially. Also, during this time, Rollins has been vocal about supporting WWE, even making comments about his former WWE Tag Team Champion partner and Shield stablemate Jon Moxley (fka Dean Ambrose).

Here is a timeline of the Ambrose interview, followed by Rollins’ response, and how Will Ospreay became tied into this web.

Jon Moxley, formerly known as Dean Ambrose, was very vocal about his frustrations with WWE during his interview with Chris Jericho on the Talk is Jericho podcast. On top of dreading certain creative decisions regarding his character, along with stating remarks about Roman Reigns during his battle with leukemia and feuding with Nia Jax, Moxley was eagerly ready to leave the company. In fact, Moxley stated that he wanted to leave so badly that he did not even look at his new contract.

Jimmy Traina of Sports Illustrated posted his interview with Rollins, who stated that he could not stay silent anymore about Moxley’s frustrations with WWE (which he also shared on the Wade Keller podcast on June, 1, 2019), shared his thoughts on Moxley’s exodus from WWE. Rollins stated, “You can only sit back and read people bashing something you love for so long and sit there and take it and try to take the high road, so to speak.” He added much more about his feelings towards Ambrose.

“I think it’s a little presumptuous of him to get on a podcast and talk down about the company that gave him such opportunities, and he referenced some of those, he did talk about how he was thankful for the time he spent here and the fact that he was able to learn, meet his wife and all that good stuff…”

“You need to take the first step and that’s looking in the mirror and asking yourself, did you do every single thing you possibly could to make yourself and your situation what you want it to be. If the answer is yes you did, then you can go elsewhere and complain, and if you feel good about it if that’s where he’s at mentally, then go right ahead, but if he hasn’t done that and looked in the mirror and made that decision, maybe he should look think about that and that goes for any other disgruntled talent, past or present.”

Rollins “doubled down” on his defense of the WWE brand by posting a tweet of why the company is the best to work for, following his match at Stomping Grounds. He even called out anyone who could do better. The same day, IWGP Junior Heavyweight Champion Will Ospreay responded, “I’m alive.”

Rollins responded to Ospreay in quite the condescending manner, stating that there is a “better version of him” in WWE, which is Ricochet.

Ahhhh I’m sorry little guy. We already have a better version of you here and he just won his first US Title tonight (Congrats @KingRicochet). Keep working hard though buddy! https://t.co/JwB36iWaIg

Ospreay responded to Rollins’ “little guy” comments, stating that he has wrestled more matches than the Universal Champion. Rollins responded by throwing in that he makes more money than he does.

I mean if you wanna talk numbers we can compare bank accounts too.

P.S. That’s counting a month off with a broken back…👍🏼 buddy.

Ospreay expressed how Rollins added much more to the conversation that was necessary,

You love adding stuff don’t ya. I mean the original question was

No talk of money. No talk of Ricochet. You said anyone.

Just as consistent, just as good.
Hope the back heals up. https://t.co/dfwkKVlyR4

Marc Raimondi of ESPN posted highlights from his interview with Ospreay, with the IWGP Jr. Heavyweight Champion stating that it is just “a little bit of friendly banter.” Ospreay retweeted Raimondi’s tweet.

I chatted with @WillOspreay tonight for the NJPW G1 Climax preview I’m writing for ESPN (coming next week!). I asked Ospreay about his Twitter back and forth with Seth Rollins and here’s what he had to say: pic.twitter.com/MijxE2kdtW

Ospreay added to Jericho’s comments, posting a picture of himself captioned, “Little Guy.”

Wade Keller of PW Torch also commented on the situation, feeling that the comments of Rollins is condescending and does not represent him well. Rollins responded with fiery comments towards Keller’s remarks.

I don’t care about goodwill, Wade. I care about respect. And if some kid who thinks he’s got it all figured out wants to step to me, then he’s gonna get patted on the head and sent on his way. And so will you. https://t.co/93grZHKHDs

Ospreay stated how the only thing he stated was, “I’m alive,” and it generated all of this chaos. He then offered a “show of goodwill” and offered an “extra small” shirt to Rollins.

Extra small? Slide in to my DM’s https://t.co/rtHWyhuDGK

It is clear that Rollins is very defensive of the current WWE product, even with the rating decline and numerous cases of people unhappy with the company.

However, as the current Universal Champion, it is expected that he would speak up for the company. Regardless, this exchange boosted the popularity of Ospreay, who has created a well-established brand without competing for WWE.