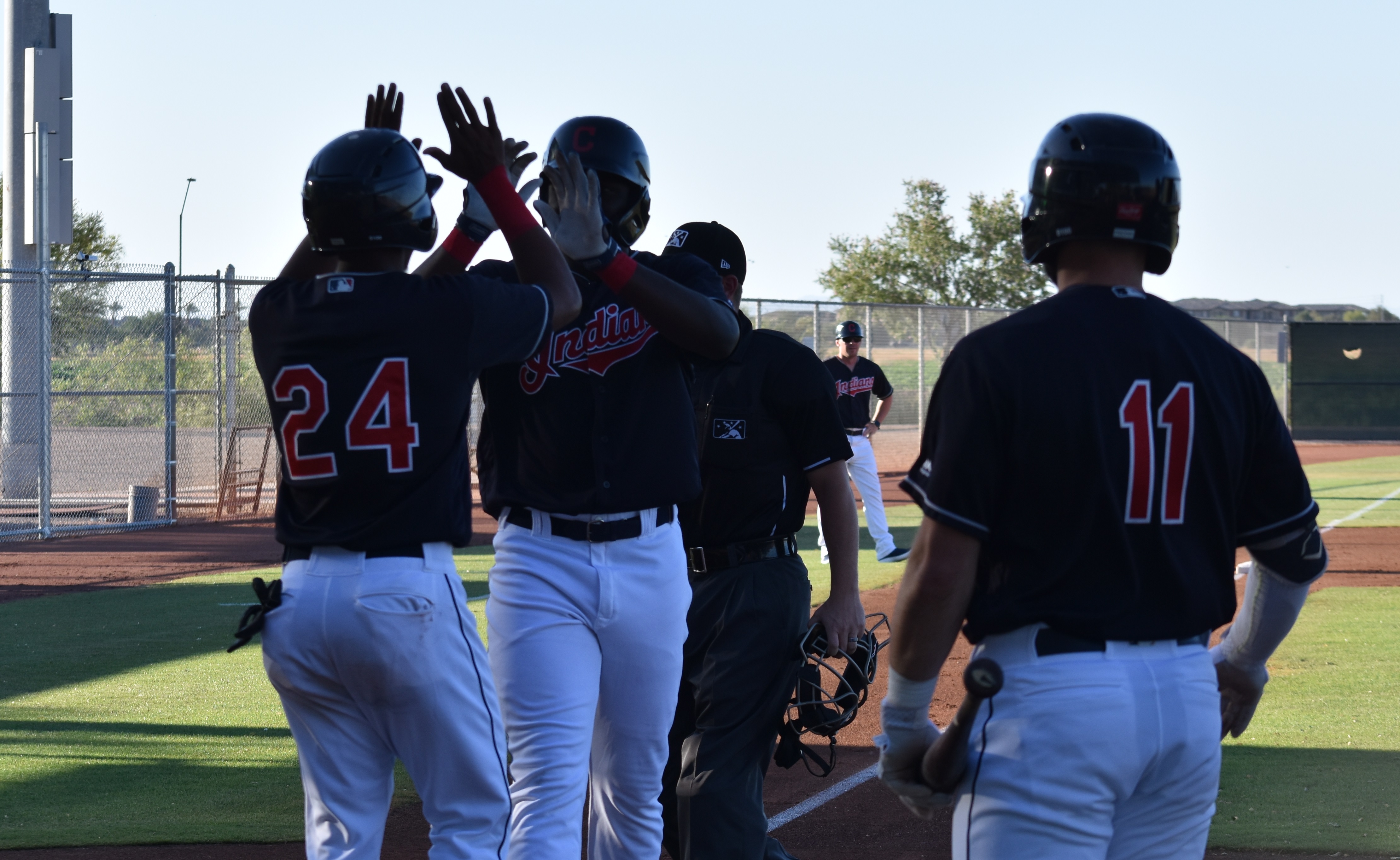 While Indians Red has struggled a bit to start this season, Indians Blue has taken off just where their predecessors (Indians 2) left off. They ripped off wins in four of their first five games, scoring 17 runs in their June 21st win against the AZL Reds alone.

This game deserves a moment of its own to begin this week’s recap as it was a spectacular show of offense all throughout. The star of this match was undoubtedly Jhonkensy Noel, a player I have been raving on about since his 2018 DSL campaign. In this game, he hit a home run in his first at bat to score Jose Tena, walked in his second, scored Tena again with a single in the fourth, scored Tena again with a sac fly in the fifth, hit his second AZL home run in the seventh and walked with the bases loaded for his sixth RBI in the eighth.

It’s very early in the season still, but Noel is now hitting .438/.500/.875 with a double to go with his two home runs and three walks to one strike out. To add a bonus, Noel has exclusively played first base where he has been a really good defensive asset. Last year, he split time between first and third and didn’t have tremendous numbers at either position defensively.

The man who benefited second most from Noel’s big night, Tena, is a newcomer to the squad as he missed the first few games with injury. He was activated just as another second baseman, Jesus Maestre, hit the injured list and has quickly taken off himself. On the 21st, Tena scored four runs on three hits (including a double) and a walk giving him a ridiculous looking slash line since he season just began. Tena is a very athletic middle infielder and it’s fantastic that he is healthy once again.

Indians Blue added two other players this week and lost another, although for a good reason. Makesiondon Kelkboom was promoted to Lake County after playing four games with team Blue. With him gone, Daritzon Feliz, Cristopher Cespedes and Pablo Jimenez remain the only holdovers from the 2018 AZL teams on team Blue.

The additions were Ike Freeman, an infielder from the 2019 draft who started playing in games the day he signed his contract, and Jeikol Contreras, who was moved from Indians Red to replace Kelkboom. Freeman has immediately taken off for team Blue with a .357/.438/.429 slash line while playing second and third.

If the Indians have been good at one thing on the minor league side over the last two years it has been drafting lights out relievers and this already looks like another solid class. While not a draft pick, Wilton Sanchez leads the way for Blue with six K’s in 4.2 innings (no walks), followed by Nate Ocker (5 k’s in 2 IP), Kevin Kelly, Nick Mikolajchak (4 k’s in 2 IP) and Jordan Jones (4 k’s in 2.1 IP). Last year’s crew included Nick Sandlin, Robert Broom, Adam Scott, Kellen Rholl and more, many of whom have already reached high A or higher. I wouldn’t be surprised at all if the relievers who separate themselves early were given similar treatment.

Team Blue took a loss against Athletics Green on Monday night, but newly drafted short stop Joab Gonzalez had his second big game within a week. He had two hits including a double on June 22nd, then repeated the effort on the 25th. Michael Amditis also continued his early hot start with a two hit game as well.

Indians Blue finished their week off with a win on Wednesday night, pushing them to 5-3 and first place in the AZL Central. A lot of players had big games in the 7-3 win, but it was Will Brennan who set everything up. He hit safely three times in three at bats with a sacrifice fly to give him two runs scored and two RBI. Julian Escobedo also had two hits including a two run double late in the game that gave him three RBI on day.

Zach Hart started the game after throwing out of the bullpen for his first two appearances and looked good with four strike outs and three hits allowed in three innings. He allowed two runs, one on a solo home run.

Chandler Fidel, Eric Mock and Kevin Kelly finished out the game with two innings apiece, striking out 11 among them. The only run scored against the bullpen was a solo home run in the ninth when the game was already out of hand.

With eight games down, we have a slight look of what this team is made of and the top power performers to stick out have been Noel (2 home runs) and Amditis (five doubles) with Brennan (two triples) also impressing. While nothing official has been announced, Noel has been out of uniform for the last few games with Jeikol Contreras taking his place in the line-up.

On the mound, the star performers have been in the pen. Kelly’s home run allowed was his first run allowed ever and he has seven strike outs and no walks in five innings. Fidel has five strike outs, no walks and one hit allowed in his first three innings.