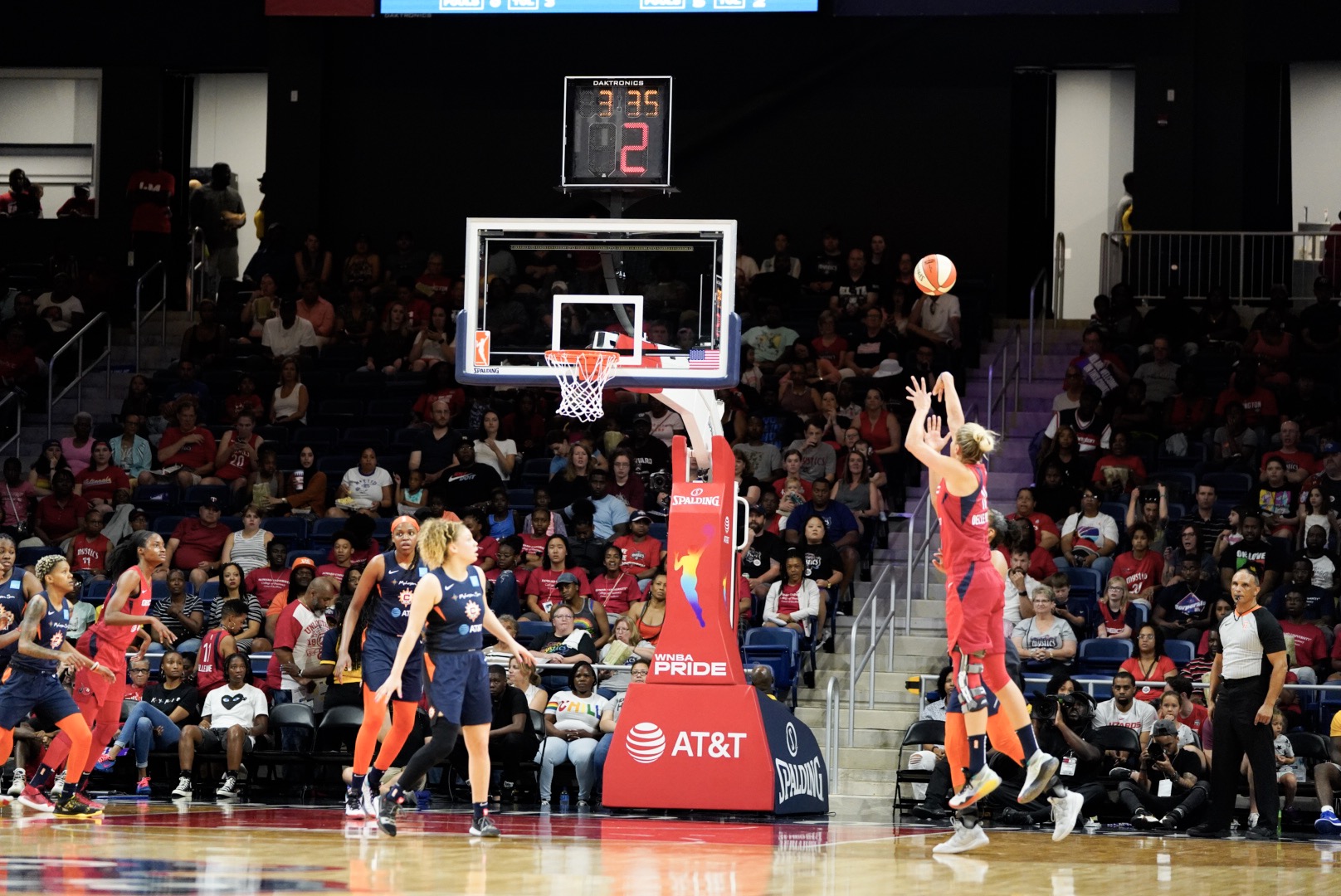 If you did not already know, the Washington Mystics are an absolute force in the WNBA right as they hope to return to the Finals and win a championship this season after getting so close last summer. On a Saturday afternoon at Entertainment and Sports Arena, the two best teams in the league, the Connecticut Sun (9-3) and Mystics (8-3), squared off for the third time this season. Washington has already lost twice in Connecticut and did not want to make it a third as they shouted, “we owe them” during their pre-game huddle.

“I had a feeling we were going to win,” point guard Kristi Toliver shared. “I think we were obviously extremely motivated after losing to those guys twice. We knew that we were better than that. We owed them one.”

Immediately, you could tell that the Mystics had something to prove. In front of a sold-out arena (4,200) and a national audience at home watching on ESPN, Washington flexed their muscle. The home team scored 20+ points in every quarter while holding the road team to 15 points or less in every quarter. Late in the first quarter, the Mystics went up double-digits for good. At one point Washington was up 47 points on the Sun who came in with the best record in the WNBA a third of the way through the season. When it was all said and done, the Mystics sent the crowd home happy after a 102-59 demolishing of the Sun.

“It’s what we’ve been trying to find,” head coach Mike Thibault said. “The balance of great defense and good offense. Everything you could ask for in a game we did today. We shared the basketball. We got a lot of assists. We shot the ball well. Our bench played great. We had six players in double figures. And we defended. We frustrated them with our defense today. That’s been the goal for the last two weeks. Since we were last home and lost to Seattle where we gave the game away. Our team has committed themselves to the defensive end before and that’s what we did.”

Elena Delle Donne has been on a tear during Washington’s now five-game winning streak. She came into Saturday afternoon’s game with a three-game streak of 20 or more points. That would have continued today, but she played less than three minutes of the fourth quarter because of the blowout nature of the game. Delle Donne finished with 19 points and 10 rebounds in 27 minutes. Ariel Atkins (15), Kristi Toliver (14), Aerial Powers (13), Tianna Hawkins 12), and Shatori Walker-Kimbrough (11) also scored in double figures in another balanced scoring attack from Washington.

“We know they’re a team that even if you get a big lead, they come back,” Delle Donne explained about not letting up. “They’ve done it against us. They’ve done it against other teams. So, you know the lead is really never safe with them. We wanted to just continue to keep our focus. Keep what we’re doing, continue to apply ball pressure, and play really good team defense. We were able to do that for 40 minutes.”

One of the most astounding parts about this is Emma Meeseman not even playing during this five-game winning streak. She is back in Europe with her Belgian National Team, but will be back for the Mystics well before the end of the season. Meeseman is an All-Star level talent that will make Mike Thibault’s team more potent than it already is. Despite the WNBA game only being 40 minutes, Washington can easily drop triple-figures on any opponent.

The Mystics have a couple of days off before they head back to the West Coast at the end of next week. Point guard Kristi Toliver plans to return to the Wizards as an assistant coach during Summer League for one game, possibly the July 8 game. Toliver did the same thing last season before officially joining the Wizards as a player development assistant coach during the 2018-19 season. Whenever Toliver decides to hang it up in the WNBA, she will certainly have a bevy of opportunities available to her as a coach at any level if she wants it. Between Toliver and newly hired Boston Celtics assistant coach Kara Lawson, the Mystics are making an impact in the WNBA and NBA.