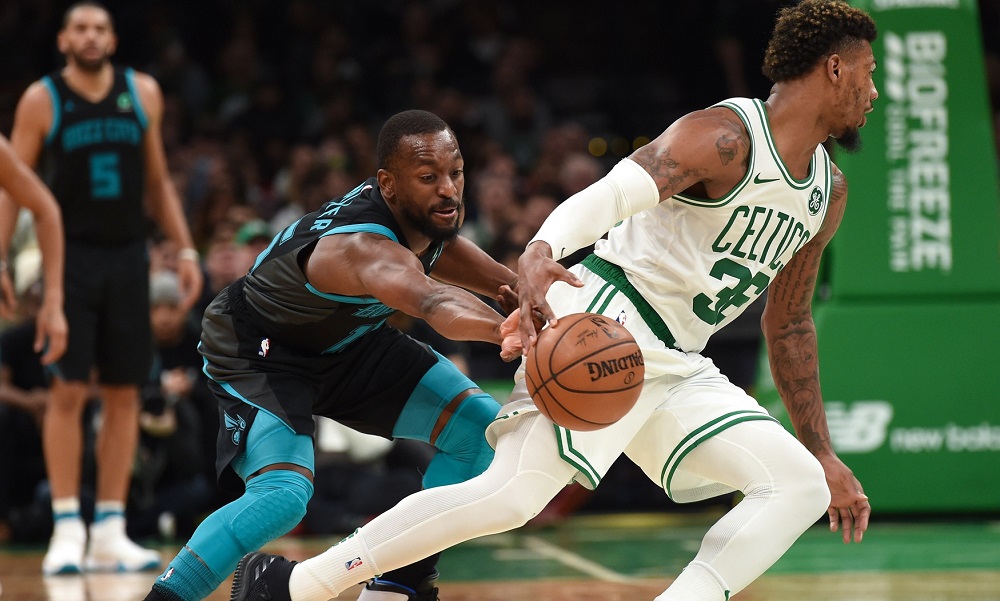 “I do think it will get done,” MacMullan said. “I think, wink wink, it’s sort of already done unless, because we always have to couch these things, unless Michael Jordan changes his mind at the 11th hour and decides to throw a lot of money Kemba’s way. But I don’t know, maybe the damage has already been done, not sure. I do expect Kemba to be here.”

Long story short: If the Celtics want to remain competitive, jumping on any All-Star with their cap room was the play this summer. Otherwise, going after another big name on the open market next summer would have cost this team young pieces and probably would not have been as good as Walker.

As much as the Celtics made their intentions known about wanting him, Walker isn’t coming here because he didn’t have any options. He’s coming to Boston because he wants to be here; he is well aware of the tradition of the franchise, a franchise that he will now have an opportunity to play for very soon.

Adding talent is a major key to success in this league, obviously. But adding talent that chooses to come here as opposed to being drafted or traded to Boston, is a dynamic that takes on great significance at this point in the Celtics’ evolution as a franchise.

A few days ago, we were wondering how the Celtics would replace the apparently departing Kyrie Irving. Now, if Kemba Walker somehow doesn’t sign with Boston, it will be a huge disappointment.

Seemingly overnight, the Celtics became not just the favorite to land Kemba, but according to every plugged-in NBA reporter in America, his absolute destination. No doubt about it. Done deal.

(That sort of certainty scares the crap out of me, because I always worry the worst will happen. Tell me when the ink of Kemba’s signature is dry on the contract.)

At first, there was a debate how the Celtics should use their new-found cap space. They need bigs and a point guard, so is it better to split their resources and pursue less-than-max-contract FAs like Nicola Vucevic and Patrick Beverley? Or go all in to get a star (Kemba) and use a mid-level exception for a serviceable bargain-type big man (Robin Lopez or Dewayne Dedmon, for example)?

Actually, the choice is a no-brainer: The Kemba approach is definitely the way to go. The NBA is a superstar league, but all-NBA players aren’t available too often. When you can get a dynamic offensive star (25.6 PPG last season on .511 effective FG%), who also defends (4th in the league with 27 charges drawn), and who’s willing to turn down more money from his current team, you must do it.

Signing a high-profile free agent makes your team more relevant to fans and media, and more attractive to other free agents. That’s shallow reasoning, but nevertheless it’s valid in NBA culture. If you’re losing an all-NBA guard, replacing him with another all-NBA guard is a nice bounce-back.

Besides, the Celtics need a guy who can fill it up like Kemba. This past season, Boston’s offensive rating was 4.7 points higher with Kyrie on the court than when he was off, per basketball-reference.com. Kemba will replace that firepower.

Last thought before free agency begins tomorrow: It’s wild to think that the Celtics are apparently in this position mainly because Irving and Al Horford are expected to leave. Wouldn’t it be even wilder if it turns out they both actually want to come back?

Horford reportedly declined the 2019-20 player option worth $30.1 million in his contract with the Celtics, making him an unrestricted free agent. Kevin O’Connor of The Ringer reported earlier this month, citing league sources, that the Dallas Mavericks were the favorite to land Horford.

The 33-year-old would be a fantastic fit on the 76ers or Kings.

Sacramento has a very talented young team that surprisingly challenged for a Western Conference playoff spot last season, and Horford would be the perfect veteran to help this inexperienced roster on and off the court. The 76ers could lose free-agent forwards Jimmy Butler and/or Tobias Harris, so acquiring Horford certainly would upgrade their defense and depth in the frontcourt. Horford also is a good 3-point shooter, and Philly’s lack of outside shooting has been a problem in each of its last two playoff runs.

Brian Windhorst of ESPN reported this alleged interest by Sacramento, and all I can say is, “No effing way.”

If Horford’s motive in leaving the Celtics is to play for a title contender, that is most definitely not the Kings. Sacramento might want him, but that shouldn’t mean he wants Sacramento. No way in hell will he sign with a franchise that hasn’t even made the playoffs since 2006.

And I hope the Sixers part of the rumor is also false. Most Celtics fans are not begrudging Al looking for a better chance to win a ring than he would have in Boston. But if he lands with Philly or the Lakers or (not as bad, but still bad) Milwaukee, then those well wishes will disappear rapidly.

The NBA will implement a coach’s challenge at the upcoming summer leagues and anticipates using the rule during the 2019-20 regular season as part of a pilot program, per a memo sent to teams this morning and obtained by ESPN.

Coaches will get only one challenge per game, whether it is successful or unsuccessful, according to the memo. They can use it to challenge only called fouls, goaltending, basket interference and plays when the ball is knocked out of bounds, the memo says. The NBA has tested this version of the challenge system in the G League over the past two seasons.

Coaches will not be able to challenge uncalled fouls. Any attempt to expand the challenge rule into that area would result in a bigger, and likely longer, fight, sources said.

This was inevitable in this age of constant video reviews. The trial period this summer should be interesting.

It’s hard to understand, though, how uncalled fouls were omitted from this process. That’s the situation where replay could best serve the goal to “get it right.” Here’s an example, from the 2012 Eastern Conference Finals, where a challenge would’ve helped.

That no-call swung the game to Miami in a series the Heat would go on to win in seven. (Yes, still bitter – why shouldn’t I be?) And, sooner or later, all players – even the superstars – become victims of embarrassing officiating misses.