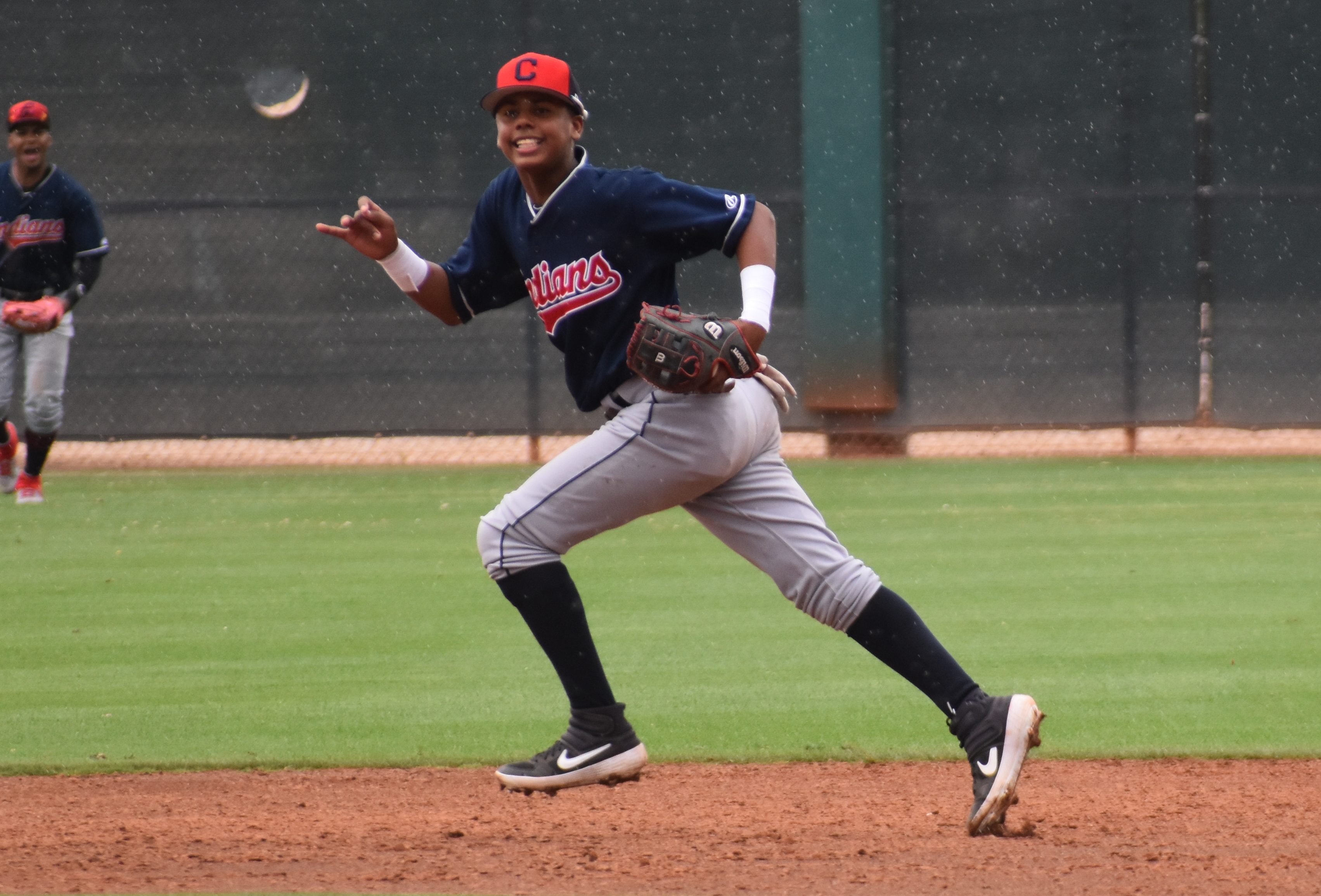 Up next in Burning River Baseball’s Indians minor league position are the third basemen. Generally an offense heavy position, the Indians have went in a different route in recent seasons, pushing players drafted and signed as second basemen or short stops to third base leading to greater defense at the  cost of some offense. While there are still two pure 3Bs on this list, the rest all began their career somewhere else and there is a good chance the pair will eventually be moved to another position.

Lost from the 2018 3B top 10 were Sam Haggerty (traded to the Mets for Kevin Plawecki), Gavin Collins (moved to the catcher list), Jhonkensy Noel (moved to 1B list), Elvis Perez, Joe Sever and Erlin Cerda (all cut earlier this year).

Even though he’s only 16, Frias has already shown multiple skills in the professional ranks, particularly his great eye at the plate and speed on the bases. He walked 17 times in his first 18 pro games and stole nine bases in eleven attempts, making up for a lot of the flaws in his hitting ability. While we’re considering him a 3B here, he has also played outfield, second and short and is probably best suited defensively for second. I got a glimpse of Frias during extended spring training this year and there is a good chance he will be with one of the AZL teams in 2020.

By Joseph Coblitz
The ongoing resurgent seasons of Will Benson and Oscar Gonzalez leave hope that Pujols will be able to resurrect his career at Lake County, but things aren’t looking great right now. Like the other pair, Pujols has great power, but strikes out far too much and like Gonzalez, he rarely walks. He showed off that power with a team record 8 home runs in the AZL in 2017, then hit another seven last year in short season Mahoning Valley.

Through it all, he has held a .291 career OBP and played such poor defense at third base that when he completed a routine play it was a cause for celebration. At the moment, Pujols is more of a candidate to be cut than to make it as far as Akron, but that power potential is real and gives him a little hope.

Brown makes contact for the Indians during the 2019 AZL season. – Joseph Coblitz, BurningRiverBaseball

This ranking is pure potential as the 2019 high school pick is yet to find any real success in his short time in Arizona. All I can say is that he hasn’t made any mistakes defensively in the times that I have observed him and that is to be expected for the short stop turned third baseman. He is certainly one I’ll keep a close eye on as a high round draft pick.

Pantoja explains how many outs there are during a 2019 MiLB spring training game. – Joseph Coblitz, BurningRiverBaseball

By Pete Conti
Pantoja with Akron has a .239 average with twelve doubles and a single home run and triple respectively with 20 RBI. He does have the largest sample size in the rankings as he has 264 plate appearances and sixty-three total hits going into July baseball. Pantoja has one of the lowest slugging percentages in the system checking in at .303 totaled with fifty Ks and only seventeen BBs. Overall, he needs to hone his skills at the dish and focus on playing for contact rather than rely on the long ball in order to find success at a consistent level for the RubberDucks.

Lopez rips a ball to the outfield during a 2019 extended spring training. – Joseph Coblitz, BurningRiverBaseball

By Joseph Coblitz
Along with Pujols, Lopez is one of the only original third basemen on this list and the Indians are currently working him out at second to make him more versatile. While he struggled greatly in the AZL in 2018, Lopez appeared to make great strides in all aspects of his game during extended spring. He is driving the ball with more authority (line drives instead of pop flies) and has reigned in his strong arm on defense. His improvements over the last year make me think that more is coming and greatly increase his potential in the near future.

By Joseph Coblitz
At one point, Krieger was a well thought of prospect, but he has now played three straight seasons in Akron and has yet to find any footing. Now dealing with nagging injuries, Krieger has fallen behind his contemporaries and is being surpassed by the next generation.

Trying to get him as much playing time as possible, Krieger was turned into a super utility man last year. He has now played more than 30 games at second, third, left and center, but has been almost exclusively a third baseman in 2019. With Jones likely to be promoted soon, Krieger may have to find a new position again when he returns from the IL.

By Pete Conti
Smith has split time between all three Indian minor league teams so far in 2019. He has excelled the most offensively with Lynchburg with a average of .324 in thirty-four appearances. While Smith does have more hits combined with Lake County and more RBI with the team, his numbers stand out more in the Carolina League. His slugging percentage took a drastic dip production wise, with the Captains going from .353 to .302 so far on this season.

By Pete Conti
Berardi has a .299 batting average thus far for Lake County in 177 plate appearances. He has 53 total hits including twelve doubles, three home runs, and fifty-nine RBI. His strikeout total is very high for the third baseman as he has 115 and 41 walks on the season. Berardi’s OBP is .317 with a very high .366 slugging percentage which shows that he contributes with pop in his bat for the Captains.

By Joseph Coblitz
Delgado was drafted as a short stop and has played short, second and third in his short professional career. He is a strong defender, but will likely end up at either second or third due to his lack of range compared to other short stops like Tyler Freeman and Brayan Rocchio. His great arm strength is the reason I continue to classify him at third, although he has been playing more second of late.

Delgado has limited power, but a great eye at the plate and good contact ability. As he ages, I expect his power to increase and for him to become an all around threat at the plate.

By Joseph Coblitz
Jones at #1 should surprise no one as he is generally considered the Indians top position player prospect at the moment and one of few recognized as top 100 in all of baseball. He has hit at every level, but unlike most who were drafted at short and moved to third, he has been extremely poor defensively. There was talk for a time of moving Jones to the outfield or first base, but nothing has come of that as of yet as he’s been exclusively a third baseman or DH since 2017.

Of the ten listed here, Jones is the only one that I would be willing to say is certain to hit the Majors at some point, but if you’re looking for the third baseman of the future, there is a good chance that it will be Yu Chang, who will be on our upcoming short stop list. As he continues to improve at the plate, Mark Mathias (#3 from the 2B top ten) is another option as he has been playing some third this year in addition to his normal second.

Back to Jones, it is unfortunate that he has been unable to correct his defensive issues and that is likely the only thing keeping him out of Akron at this point as his bat is ready. At some point, he will either improve, the Indians will decide the bat is positive enough to withstand the defense or he will be moved to another position. In any event, his ETA for the big leagues could be anywhere between late 2020 and 2021.