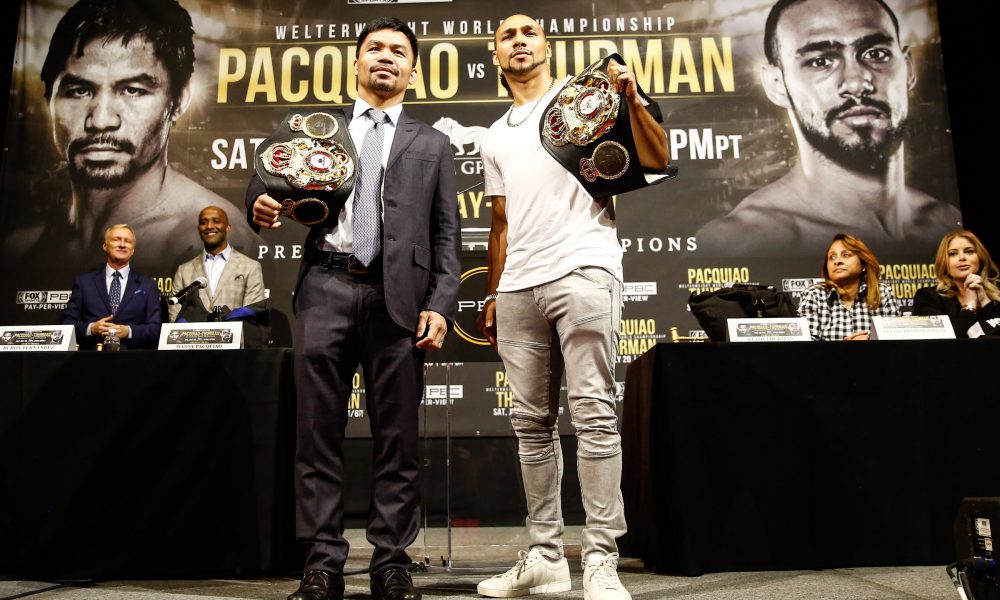 After 22 months away, Keith Thurman made his return to the boxing ring. While rusty, he took care of Josesito Lopez in January via majority decision. Now, “One Time” has his eyes set on Manny Pacquiao.

Thurman (29-0, 1NC) will be defending his WBA (Super) Welterweight Title against Pacquiao (61-7-2) inside the MGM Grand Garden Arena on July 20. The latter is on a two-fight win streak, and 4-1 in his last five fights. While he could have waited for the Pacquiao fight, Thurman believes he is prepared for the bout.

“I am back on the big stage, I have a once-in-a-lifetime opportunity to showcase my talent and skill with a legend in the sport. It’s a big ‘get back’ year for me,” said Thurman during media workouts. “I tried to tell everyone that and this is what it’s like when champions get back to performing like world class champions. No excuses. I want to be the best Keith Thurman I can be, and we set up a camp where we can bring out the best in me, for myself, for the fight and for the fight fans.”

Fight fans, you tell me: Is Thurman truly ready for Manny Pacquiao?

Although Pacquiao is older and nearing the end of his career, he is not an opponent to be taken lightly. After losing to Floyd Mayweather in 2015, Pacquiao went on that 4-1 run. He arguably should have won the fight against Jeff Horn in Australia of all places. That was the best he’s looked in quite some time. The fight against Adrien Broner, while not competitive in the slightest, still showed how durable he is.

Thurman may have the age and maybe even the strength advantage, but Pacquiao’s consistent time inside the ring blows Thurman out of the water. Add on the fact he was extremely rusty against Lopez and that spells disaster.

While Thurman was fast against Lopez, his momentum wasn’t carrying over into the later rounds. Lopez rocked Thurman in the sixth, seventh and eighth, but couldn’t truly take advantage. Thurman’s head rocking back was a troubling sign, however, and with the Senator of the Philippines teasing his knockout power being back, Thurman has something to watch out for.

When I asked Thurman if the layoff and rust should have deterred him away from the fight, he dismissed the thought. He stated the style of Pacquiao was made for him, and how Manny’s past bouts show several flaws in his fight game.

Asked @keithfthurmanjr if there’s cause for concern having a fight with @MannyPacquiao after only having 1 fight in 22 months, & if there was ever a thought about an opponent before him. He explained why Manny was indeed the perfect bout for him. #PacquiaoThurman #Boxing pic.twitter.com/HGUHiWgrY4

Now, whether that is him playing an act remains to be seen. However, this is the fight he has wanted for years. Pundits and fans have wanted this fight as well, albeit a while back before Thurman’s injuries.

As we get closer to July 20, one has to wonder the mindset of both fighters, especially Thurman. A subpar performance after fighting multiple injuries does not sound like a sexy matchup against the older Pacquiao. If his training goes off without a hitch, however, and the necessary time off prior to the fight brings forth a rejuvenated Keith Thurman, then all will be right in the world.

Which Keith Thurman will we be getting in Las Vegas? The real question is: is he ready for a true challenge against someone else after going through one against himself?