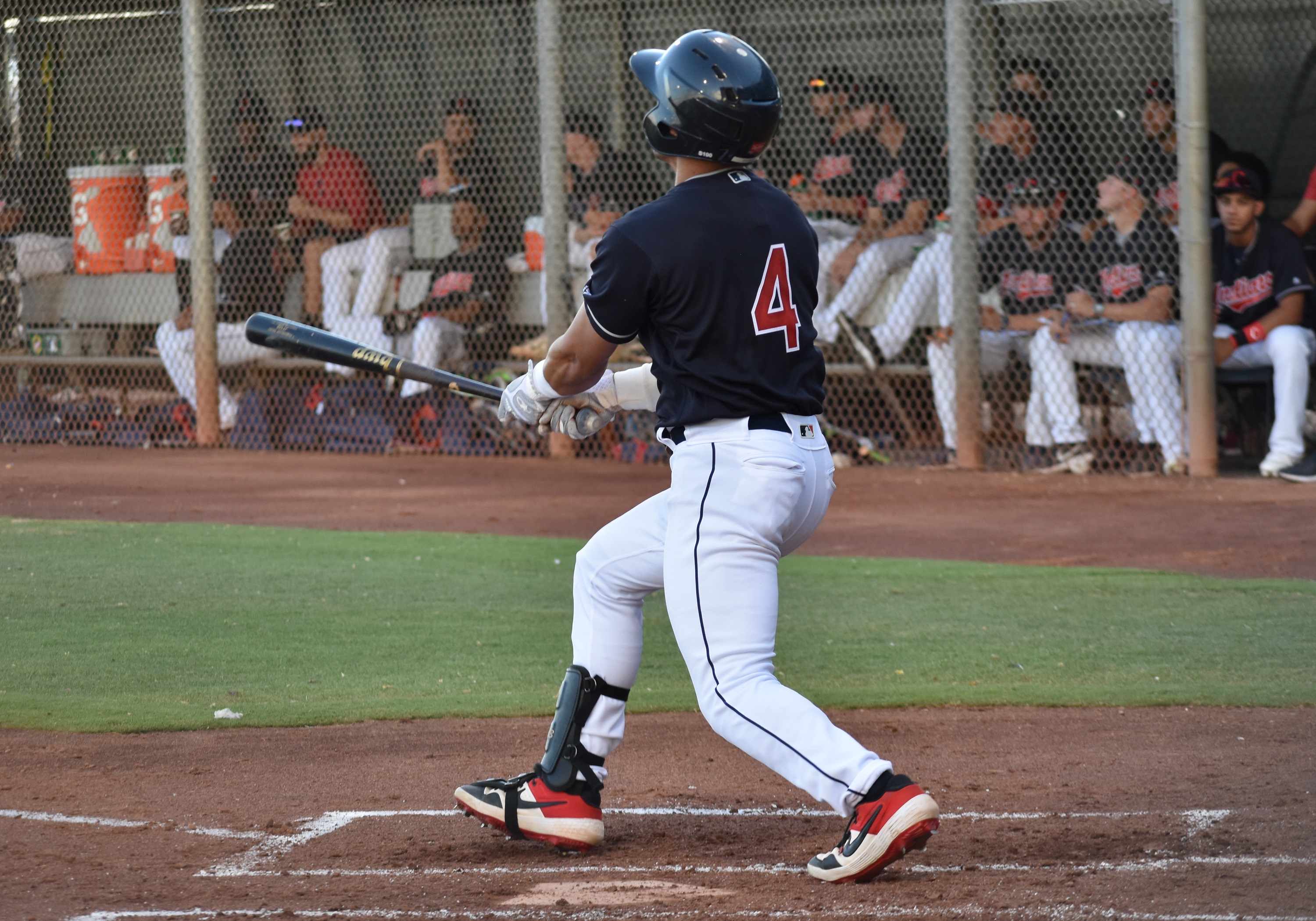 It was another great week for the Indians Blue offense at they put up 19 runs in the first three games alone with a pile of hitters that are as hot as the average starting temperature (108°).

The hottest of the hot is Julian Escobedo, who has rattled off a six game hitting streak to begin his career with four of those games having multiple hits and four of those hits being for extra bases. You could imagine that would lead to some rather gaudy numbers and his .438/.561/.688 stat line is just that. Possibly the most impressive stat for Escobedo is his walk to strike out ratio of 9/3. He’s a great contact hitter with a good eye for the zone and significant power.

Mock pitches in relief for the Indians during the 2019 AZL season. – Joseph Coblitz, BurningRiverBaseball

During the Indians loss against the Cubs 1 on July 27th, Escobedo, Ike Freeman, Jose Tena and Jeikol Contreras all had at least two hits, but six errors and a rough start from Diarlin Jimenez cost them any chance at the game. While the pitching staff as a whole played poorly, Nate Ocker had another great appearance with two strike outs and a walk in two hitless innings.

Against the Rangers on Friday, it was more bullpen brilliance and strong offense that allowed team Blue to take the win. While they didn’t have the hit attack of the previous game, they took five walks (two by Wilfri Peralta) and Jose Colina added his second home run of the season to ultimately score seven.

Luis D. Garcia had his roughest start of the season so far, but Randy Labaut and Nick Mikolajchak combined to pitch the last four innings without allowing a run, earning a hold and a save respectively. Mikolajchak was particularly impressive with six strike outs and one hit allowed.

Salazar pitches during a rehab assignment in the AZL in 2019. – Joseph Coblitz, BurningRiverBaseball

Sunday was a big game for team Blue for more reasons than their win over Cubs 2. Danny Salazar made the start on rehab assignment, officially beginning his return to the big leagues. Salazar has dealt with a variety of right arm issues over the last year and has been working out in Goodyear, but had not pitched in an actual game prior to this. He threw 1.2 innings, struck out batters for all five outs and allowed three hits, all on weak contact. He was throwing his fastball in the mid-90’s and had good separation in his velocity. He is expected to make his next rehab start in Ohio.

Even after Salazar left the game, both teams had trouble scoring, but the Indians managed to put everything together in the third when they loaded the bases on a Joab Gonzalez sacrifice bunt attempt for Escobedo. Blue’s top hitter came through with his first career home run and grand slam. They would score just two more runs on the night, both on wild pitches.

As with every game, there were a couple amazing relief performances, this time out of Wilton Sanchez and Nic Enright. Sanchez has been money all season and now has nine strike outs in 7.2 innings with just one walk, two hits and one run allowed. Enright also has one walk and two hits allowed although he has thrown just 3.1 scoreless innings. Both are 20 years old and have electric stuff.

While it would come to an end the following game, Escobedo increased his hit (7) and on base (8) streaks on July 1st against the Angels with three hits and a walk. This was his first three hit game and included his first career triple as well as two steals.

Contreras puts a ball in play for AZL Indians Blue during the 2019 season. – Joseph Coblitz, BurningRiverBaseball

While the Indians did score five in this game, it was another case of benefiting from the opposing team’s defense as the Angels committed five errors and threw four wild pitches, leading to just three runs batted in. Even so, Jeikol Contreras still had a solid game with a double as part of two hits and Wilfri Peralta reached three times with two singles and a walk.

Along with Escobedo, Dartizon Feliz really stuck out in this game as a superb performer. He struck out nine in five innings while allowing six hits and two runs without a walk. Felix has struggled with command in previous appearances and his ability to locate his fastball early in counts this night allowed him to work his slider once ahead, leading to strike outs instead of walks. This is the type of performance I’ve been looking for from Feliz for over a year now and may be evidence that he made a significant breakthrough.

While they lost that game in extra innings, Blue came back against the White Sox on Tuesday with a 10-8 win that saw production from nearly the entire lineup. Both Cristopher Cespedes and Aaron Bracho hit their second home runs of the season, five hitters reached safely at least twice and four knocked in at least two runs. Only Escobedo and Jhonkensy Noel, two of the team’s hottest hitters early on, went hitless.

Obviously, things didn’t go as well for the pitching staff, but Eric Mock was impressive again, striking out seven over three innings in relief and allowing one run on two hits (a solo home run).

Team Blue finished off the week strong with a 6-4 win on the road against the Brewers Gold. Escobedo started new streaks with a hit and four walks while Mike Moroff finally got his first hit in three games with the Indians Blue on a fifth inning home run. In all, the Indians walked ten times while the pitching staff struck out ten and walked just one. The star was fifth round pick Hunter Gaddis, who threw three scoreless with five strike outs, but Mikolajchak pitched strongly as well.

Overall, the Indians have been a very strike out heavy team and Feliz is currently third in the AZL with 20 K’s in 12.1 innings. Mikolajchak has an incredible 12 strike outs with no walks in six innings and Wilton Sanchez has nine in 7.1 innings with just one walk and one run allowed.