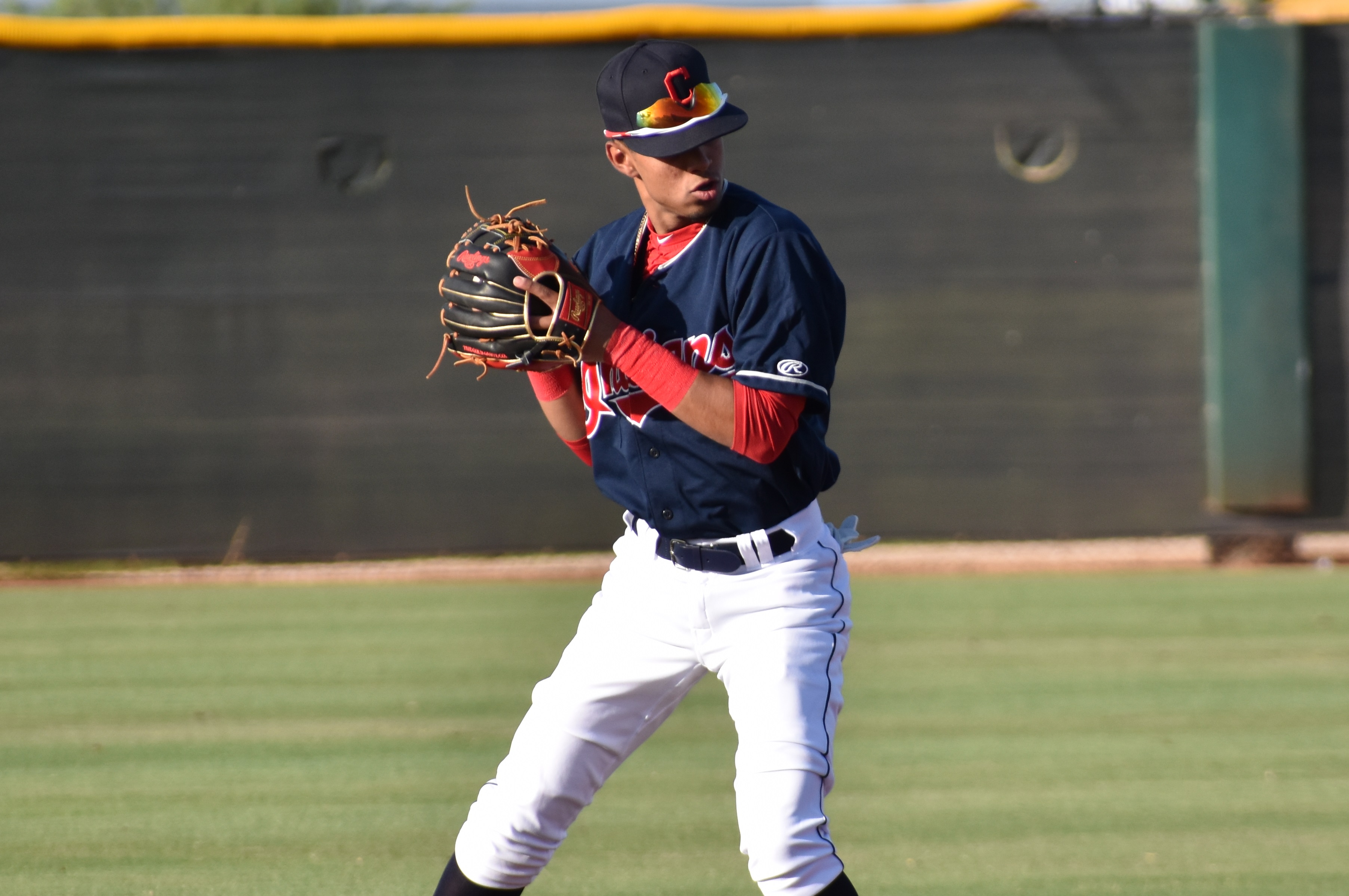 After a rough start, the Arizona League Indians Red have completely turned things around with a six game winning streak that started on June 27th. This has pushed them out of last and into third in the AZL West, two games behind Padres 1. While it may seem early to be thinking about play-offs, in the Arizona League play-off teams are determined by the first and second half winners in each division, meaning that they will either have to catch the Padres in short order or win the second half to have a chance.

Last Saturday, Indians Red had their most impressive win of the group with a 9-2 victory over Padres 2. The still incredibly hot Yainer Diaz had three hits in this game including two home runs and a double. His season long hitting streak came to an end on July 2nd at 10 games (12 if you go back to last season), but he came right back with a multi-hit game on the third. He has  multiple hits in nine of his 12 games played this year and is slugging .745, fourth in the Arizona League. Just like last season with Billy Wilson on team Blue and Miguel Jerez on Red, it appears the Indians have two early MVP candidates in Diaz and Julian Escobedo of team Blue.

Also on last Saturday, Yordys Valdes reached twice and stole two bases, giving him seven on the season without being caught. While he has struggled some early on both defensively and offensively, his base running is making up some of the value lost elsewhere. While he still isn’t tearing the cover off the ball, the fact that he didn’t reach base in his first three games is still dragging down his season stats a bit.

Staff ace, Brauny Munoz started this game and had another tremendous outing with five shut out innings. He has now struck out 17 with two walks in 14 innings across three starts and holds a 1.29 ERA.

Back with another win on July 1st, it was Yainer who provided the offense again with four RBI on two hits including a double. Valdes helped out again with two more steals and two more runs scored.

In relief, one of the top performers from extended spring, Samuel Vasquez, finally made his AZL debut and threw two scoreless innings, striking out four while allowing just one hit and one walk. Vasquez was used as a starter in extended and could be stretched out over the next few weeks to return to that role.

Misiaszek throws in relief for the AZL Indians Red during the 2019 season. – Joseph Coblitz, BurningRiverBaseball

On July 2nd against the top team in the league, Giants Orange, the Indians managed to score 10 without a single extra base hit. The Giants helped out with four errors and two wild pitches, although the Indians were far from flawless with three errors and three unearned runs allowed of their own. Overall, the pitching wasn’t great in this game, but Andrew Misiaszek was great with three one hit innings in relief, striking out four without a walk. He earned his first career save for his effort and now has a 1.08 ERA through 8.1 innings. Following this appearance Misiaszek was promoted to Mahoning Valley.

Team Red played their first day game of the season on July 3rd heading into a mini vacation as all AZL teams had the 4th of July off. Again, it was Yainer with the three hit offensive attack that lead the way, and he scored the first run in the 4th on a Jose Medina single. They would add three more in the 8th thanks to an RBI single by Christian Cairo and two Dodgers Mota errors, but the pitching staff didn’t need any more than the first run.

Three pitchers combined to throw a three hit, no walk shut out that pushed team Red ahead of Dodgers Mota in the standings. Miguel Vinicio started and went the first five, Matt Waldron continued his amazing start with six strike outs in three innings and Serafino Brito wrapped it up with a scoreless ninth. Each pitcher gave up exactly one hit.

On Friday night, the Indians Red wrapped up the week with a rehab start from Danny Salazar. Originally on team Blue, Salazar switched sides to play at home against Cubs 2 and had mixed results.

In the first (video above), he struck out the side on nine pitches and he allowed just a single and a HBP in the second. However, he was unable to finish the third as he gave up two doubles and a home run, leading to what would become an 8-4 Cubs win.

Normally a starter, Jhon Vergara took over in relief and pitched four innings, allowing two runs leading to a 1.84 ERA so far this season. Kevin Coulter then had the best appearance of his young career with two strike outs in a perfect inning.

While the Indians ended their win streak and couldn’t outscore the Cubs, Cesar Idrogo had a nice game with two hits and a few good plays on defense in left field and Marlin Made knocked in three thanks to a double and a sac fly. Idrogo has struggled on defense to this point and Made on offense, so it was very positive to see a reversal in these trends.

In some unfortunate news, center fielder Alexfri Planez has broken his hamate bone and will miss the rest of the season. This is the same injury that cost George Valera the 2018 season and has kept Micael Ramirez out so far this year. While some are being added to the IL, Maiker Manzanillo and Gregori Vasquez have finished their rehab assignments in Arizona and have been sent to Mahoning Valley.