You Morning Dump... Where the 15th roster spot goes to... 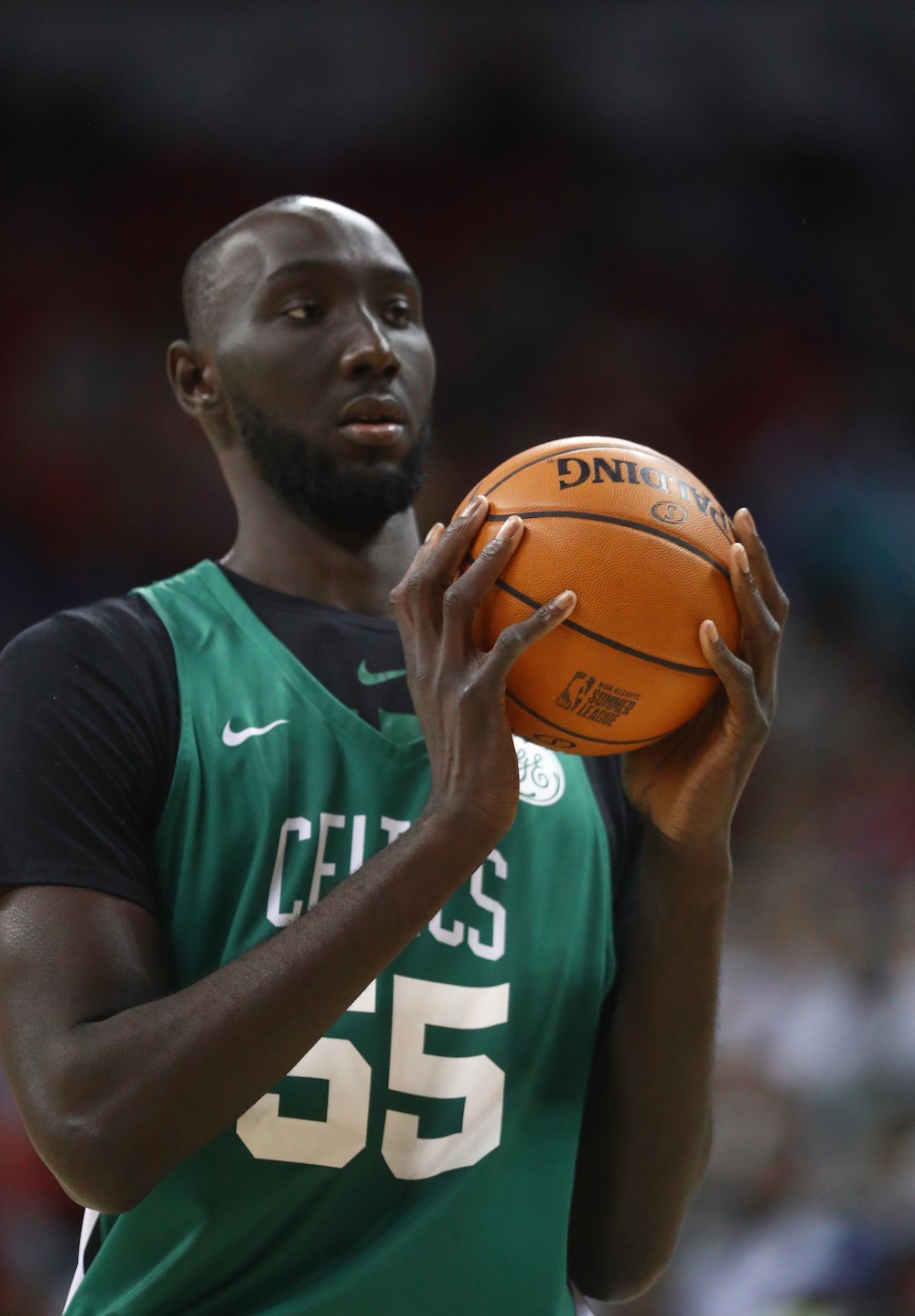 You Morning Dump... Where the 15th roster spot goes to...

The Celtics could go a number of different roads right now with the roster spot. The clear name that will come up first with fans is Tacko Fall. The 7-foot-7 center has shown NBA potential in summer league for his rim protection and better than expected mobility. However, the Celtics do not have to do anything with him for the time being. They have Fall’s roster rights through training camp on an Exhibit 10 deal, which is essentially a non-guaranteed contract for the league minimum. They can keep him on that deal for now and if he wins a roster spot in training camp, slot him onto the roster.

The Celtics also have full rights on Tremont Waters and Max Strus for their two-way contract slots. They can convert either of these deals into an NBA contract at any time, which would open up a two-way slot for Boston. It’s hard to envision Fall making the NBA roster out of camp but the team could avoid the risk of losing him if he’s waived (to the Red Claws) after the preseason by getting him to sign a two-way contract if Waters is promoted to the 15-man roster.

There are still a lot of veteran names on the open market and Boston’s frontcourt still has a lot of question marks. Grant Williams looks like he’s ready to contribute right away but the Celtics are definitely short on size when it comes to the power forward position or a small-ball five. Any of the C’s true center options (Kanter, Theis, Poirier, Williams) could be in trouble defensively when teams downsize so the Celtics may want a more proven name or someone with more size to compete for minutes with Grant Williams and Semi Ojeleye off the bench when playing small.

While my first instinct is to honor Yabu’s legacy by keeping his roster spot open and putting a life-size cardboard cut-out on the bench all season long of the Dancing Bear dabbing, life probably will go on without the lovable  frenchman.

If you, like me, tend to get irrationally excited about summer league, you probably want the Celtics to convert one of their two-way contract guys (Tremont Waters, not Max Strus) into a full-time rostered player, or give the spot to folk hero Tacko Fall. Then, maybe you’re like me where you take a minute to remember that what you see in summer league from late 2nd round draft picks and undrafted free agents rarely translates to the league.

The Cs could also look to bring in one more established veteran big man to join the crowded, but underwhelming race in the front-court, or they could bring in a backup point guard if they aren’t sold on giving minutes to Brad Wanamaker or Carsen Edwards right away. But Jay King made a good point about finding the right veteran minimum guy in his article on the subject:

A handful of notables remain available, but it’s tough for non-title favorites to find contributors for minimum money this late in the game.

There’s the sobering reality that while the NBA is wide open this season, the Celtics likely aren’t in that larger-than-usual upper crust of legitimate title contenders, and so guys might want to latch on to a title contender and ride the pine for the minimum instead.

Perhaps there’s a chance the Celtics roll with 14 guys under contract, the two two-way players and a non-guaranteed contract for Fall if he clears waivers on his current Exhibit 10 contract and then if the team is competitive midway through the season, they get their veteran on the buyout market.

On the complete opposite side of the spectrum is a major roster move that shakes up the rotation before September:

Per source, the Celtics might even ultimately add 2 more players and enter training camp with 16 guaranteed contracts, as they've done in the past. It's pretty clear that with so many young guys and unknown quantities, they want to get a look at as many players as possible.

Again, the summer league glow that we’re basking in right now will likely wear off by the pre-season and if Grant Williams, Carsen Edwards and Romeo Langford look like minuses on the court, the Cs depth will be perilously thin.

We’re about to enter what has traditionally been a quiet time on the NBA calendar, and while the major moves are likely done, Celtics’ beat writers probably shouldn’t take lengthy vacations this summer (sorry, John).

On page 2, Brad Stevens offers a postmortem on last season

“If it doesn’t work, it’s not because guys aren’t good guys,” Stevens said. “Everybody in that locker room is well-intentioned, everybody is a good guy. We didn’t fit, ya know? I think that’s part of it. Sometimes, that happens. Anytime you have a relationship, it doesn’t always fit together. I don’t have anything bad to say about anybody and I don’t want to make it look like, by saying it’s becoming a priority all of a sudden, that it wasn’t before. It’s always been one.”

Brad Stevens spoke yesterday and in the most aw-shucks, Brad Stevens way possible, he put a lid on last season — speaking on Kyrie Irving specifically and then offering an explanation broadly for last season’s disappointment.

We’ve all already spilled many words on an explanation for “we didn’t fit” but what’s clear is that Danny and Brad have tried to solve for it. Kemba Walker is all about the team, the Celtics rookies are all high character guys. It doesn’t feel as though guys will have personal agendas this year like they did last year, except…

Finally, is Jaylen Brown thinking about his extension?

Jaylen Brown is eligible for a new long-term deal as well as he enters his fourth NBA season, but the 22-year-old wing told BostonSportsJournal.com on Wednesday at Thomas & Mack Center that the team has not discussed an extension yet with him.

“I haven’t heard from them,” Brown told BSJ. “The ball is in their court.”

Marcus Smart had his best season in green after he got paid, Terry Rozier imploded last season as he played for a contract. If Jaylen Brown isn’t extended (and Danny Ainge’s track record says he probably won’t) how will it affect the cerebral fourth-year wing?

If Jaylen is asked to come off the bench again, will he bristle at that, or press when he gets on the court?

Jaylen sacrificed a lot last season and adapted well to his role, and even though the roster has thinned out a bit, giving him more of an opportunity to showcase all of his game, he’s still third or fourth in the pecking order on offense.

If Jaylen isn’t extended, will he subscribe to Brad Stevens’ “do what you do well” philosophy?

“We don’t need people to ascend to those things,” Stevens said of bigger roles. “We just need people to be the best version of themselves. Then, that stuff all takes care of itself. We have a lot of different players on this team capable of adding value in all those regards. We don’t need Jayson or Jaylen to put that extra burden on themselves, we just need them to get better at what they do well. They’ve been good at working on it. They’ve both been in Boston quite a bit and they’ve both been working when they’re not. They will be fine.”