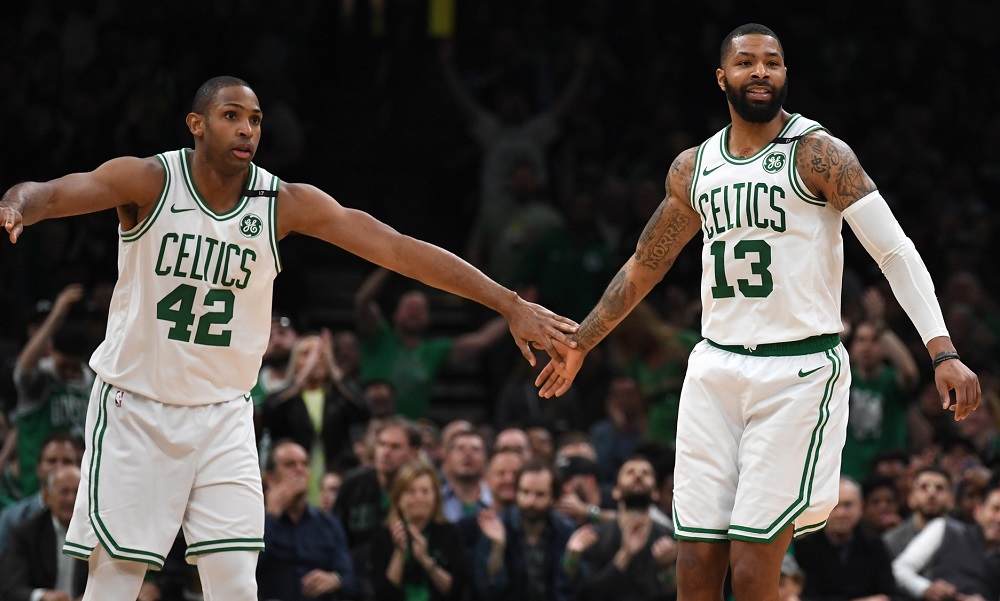 Al Horford, Guerschon Yabusele and Marcus Morris all departed Boston yesterday. For varying reasons, most Celtics fans are sorry to see them go.

On Friday, Horford was introduced at a press conference in Philadelphia and gave his first comments to the media since he moved on.

“When I decided to opt out, it wasn’t an easy decision,” Horford said (hat tip to NBC Sports Boston’s Chris Forsberg). “But I did it. I felt like there was going to be a lot of options for me. When June 30 came around, things escalated very, very quickly. There were multiple teams, a lot of strong interest. I had to make what was the best decision for me. When Elton called and spoke with my agent, he laid down this offer. I was very surprised there was such strong interest for me being here. It made the decision very easy, and I’m just excited to be a part of this.”

So it’s just as everyone thought – Horford’s main motivation to bail on the Celtics was money. The Sixers were willing to pay Al more than Boston, and to add a fourth year, not the three that Boston had on the table.

To be fair, other factors had to be in play. Al didn’t mention the toxic atmosphere that we now know existed in the locker room, but that had to hurt. The big man will also probably benefit on the court by playing with a team that has a true center.

That, presumably, is one of Philly’s attractions to Horford: He can play the four a little more often, and he no longer has to battle Embiid. While Horford’s defense against the Sixers star was always impressive, those matchups against the bruising center were clearly very taxing. Horford is 33, and he might very well believe the opportunity to play next to a true center will help extend his playing career.

The vibe for Al’s exit is that most Celtics fans like him so much personally that we don’t begrudge him getting his last big payday. I agree, and my gut feeling is he’ll get a standing ovation when he returns to the Garden. However, I strongly object to his choice of team. If he’d signed with, say, the Clippers or Rockets, I’d still root for him. But with a historic rival in Philly? Not possible.

“I’ve Been blessed and thankful since that special day of my life. #2016NbaDraft

I want thank all the fans, the city of Boston for all the love and the @celtics for the amazing experience.

Yabu never came close to making a meaningful contribution, but he was fun. I hope the Dancing Bear goes back to France, signs a big contract to play in Europe, drinks only the best wines, and lives happily ever after.

Marcus Morris hasn’t said farewell yet, but he was in the news for his free agency decisions.

Morris agreed Thursday with the Knicks on a one-year, $15 million contract, Shams Charania of The Athletic reports.

After initially agreeing to a two-year, $20 million deal with the Spurs on July 6, Morris reopened his free agency when it became apparent the Knicks would have more salary-cap space available than initially anticipated. Morris will forgo an extra year of security for a higher annual salary in New York, where he’ll be forced to fight for minutes in a deep collection of forwards that includes second-year player Kevin Knox and free-agent pickups Julius Randle, Bobby Portis, Taj Gibson, Wayne Ellington and Reggie Bullock.

Reneging on a deal, even a verbal commitment, is a bad look for Mook, especially since San Antonio traded away Davis Bertans to free up cap space needed to sign Morris. But it wasn’t that bad compared to these previous instances:

This is not the first time this has happened, of course. DeAndre Jordan in 2015 agreed to a 4-year, $80 million deal with the Dallas Mavericks before his coach and teammates at the Los Angeles Clippers famously and hilariously talked him out of the agreement during the moratorium period. He returned to the Clippers on an $88 million deal. Hedo Turkoglu backed out of a deal with Portland in 2009 to join Toronto under the premise of realizing he wanted to live in a more international city. Carlos Boozer convinced Cleveland in 2004 to deny his team option so he could re-sign on a lucrative long-term deal, then instead signed with Utah on a bigger deal.

The Athletic: Weiss: How to prevent sides from backing out of verbal agreements in NBA free agency

In his two years here, Mook’s status with Boston fans depended on whether or not he was hitting his jumper, but he was always entertaining. When he comes back to play in Boston, this classic moment is all they’ll need for the tribute video:

Finally, while we’re talking about player movement, here’s a review of winners and losers during this free agency period. The Celts were somewhere in the middle.

The loss of Kyrie Irving by itself had the potential to be devastating. Tack on Al Horford choosing to play for Philly next year and trading away Aron Baynes, and any semblance of veteran leadership was gone. But the Celtics rebounded in adding Kemba Walker, whose talent will help fill the void left by Irving’s departure.

It’ll be a big-by-committee approach in the frontcourt for the Celtics as they added veteran Enes Kanter in addition to French 7-footer Vincent Poirer while re-signing Daniel Theis.

You never know about rookies, but the Celtics are feeling really good about a couple (Grant Williams and Carsen Edwards) who seem poised to be in the mix for playing time this season.

The loss of Horford will be a tough blow for them to overcome, but outside of that the Celtics had a decent offseason.

This is accurate. Boston will seriously miss Horford, but snagging Kemba saved the Celtics from complete failure.

We’re talking, of course, about the Summer League Celtics, a team that has a perfect 4-0 record (one of three undefeated teams) and is the No. 1 seed heading into tournament play in Las Vegas. The squad isn’t just beating teams, but beating teams big, with their average margin of victory 17 points. Their “closest” game thus far was a 13-point victory over the summer Cavaliers in their second game of the schedule.

Most important, it’s actually fun to watch them. Yes, fun. That’s a much different F-word than the one associated with the summer C’s parent club.

It’s a likable bunch of youngsters, some looking to make a name for themselves before entering a life in the NBA, and others looking to keep their dream going. They play with an energy and a surprising amount of cohesion for a crew that has been together for just over a week.

CBS Boston: These Summer Celtics Are A Whole Lot Of Fun

“Fun” and “winning” have been the Celtics’ themes for the past week in Vegas, and we really needed it. With the improved Robert Williams joined by three of the four draftees, plus Tacko Fall: Folk Hero, and a bunch of high-flying, hot-shooting, hard-working guys who won’t make the Celtics but who’ve shown they will earn a living on a basketball court somewhere, these Celtics have been the must-see squad of the summer league.

They actually could win the whole thing, too, which won’t really mean anything except to absolutely lift the spirits of Celtics Nation. The Cs start off today with a rematch against the Grizzlies (who they beat by 26 on Thursday) and their cheap-shot specialist, Grayson Allen.

Here’s the schedule (all times shown in Eastern):

And, finally… Tremont Waters in our thoughts

The father of Tremont Waters, a standout basketball player from Notre Dame High School recently drafted by the Boston Celtics, was found dead Thursday of an apparent suicide at a Kimberly Avenue hotel, police said.

Edward Waters Jr.’s death was confirmed to be a suicide, the state Office of the Chief Medical Examiner said Friday.

His parents, who called themselves Team Waters, worked hard to keep their son grounded as a youth. His father once forced his son to watch “Broke,” an ESPN “30-for-30” documentary detailing the many former pro athletes who wound up with huge financial problems, at least once a month.

“I always taught him how to be a great young man. What I love about sports, basketball teaches him leadership, how to lead by example, and how to be responsible for other people. I just want him to one day get a degree from college and be able to feed himself, his loved ones, his kids later on in life. We love basketball, but it’s all about what type of young man he’s going to be, what type of husband, what type of father, a leader in his own community,” Edward Waters told the New Haven Register in 2013.

This is heartbreaking. Tremont is on the cusp of seeing his dreams come true; losing his father now is incomprehensible. The Celtics organization will no doubt be there to support Tremont. Let’s hope that he and his family have the strength to persevere.