Your Morning Dump... Where there's all sorts of moves going on 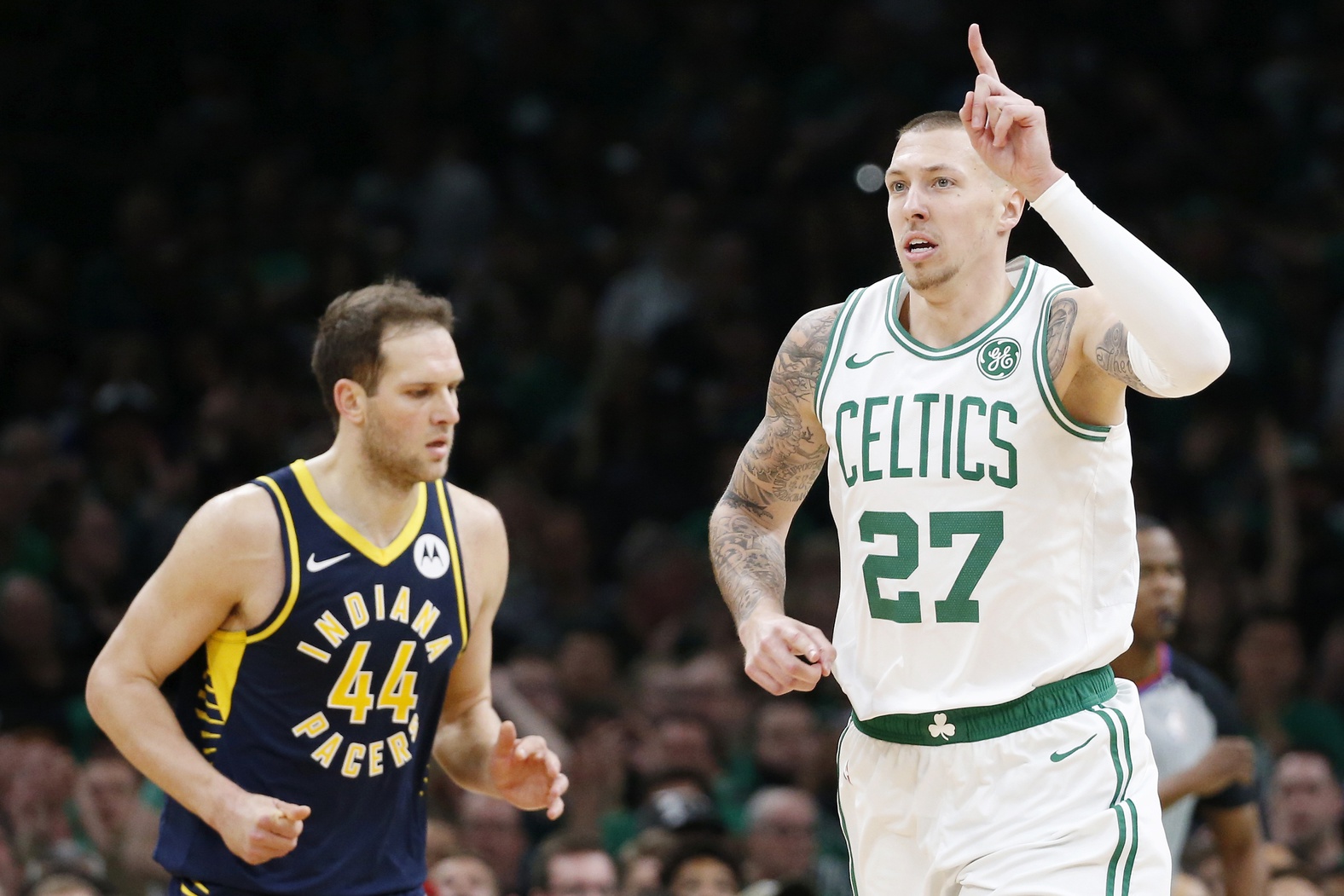 Your Morning Dump... Where there's all sorts of moves going on

On Monday, the Celtics rescinded Daniel Theis’ qualifying offer, making him an unrestricted free agent according to Keith Smith. Theis agreed to a two-year, $10 million deal with the Celtics two weeks ago, so the only change here is the mechanism in which the Celtics will retain him.

Since Theis is now an unrestricted free agent, the Celtics can use Early Bird Rights to re-sign him to the agreed-upon $10 million. This, in turn, frees up additional cap space for Boston to use on their open 15th roster spot, which was opened when the team waived and stretched Guerschon Yabusele earlier this week.

Boston now has about $1.1 million in cap space to use on the last spot, and the series of moves made in order to create that space could clue us in on the Celtics’ plans for the final roster spot.

One way the Celtics could go about this is to use the space to secure Tremont Waters on a four-year contract above the minimum salary. Signing a rookie above the minimum in this situation allows Boston to ink Waters for longer than two years.

The rookie second-round pick agreed to a two-way contract with Boston recently, so this could free up a two-way slot for someone else. Tacko Fall and Javonte Green both had strong Summer Leagues and could be worth a longer look in Maine next season.

So, here’s what’s going on:

The C’s probably knew pretty early on that they weren’t going to keep Yabusele. They probably looked at shifting him to a team with cap space along with a second rounder or cash considerations (basically, you send the player to another team along with his salary, so the other team doesn’t have to spend money), but they didn’t find any takers.

When they weren’t able to open up a roster spot that way, they waived and stretched Yabusele. This effectively spreads his final year’s salary over a three year period in terms of its impact on the salary cap, opening up both a roster spot and about a million dollars in cap space.

The problem is that they only have that million dollars available if Daniel Theis’s cap hold is gone.

Because, as currently constituted, the Celtics are over the soft cap.

If, however, they rescind Theis’s QO, that cap hold disappears and the Celtics are now free to spend the money they freed up by waiving Yabu.

In theory, Theis can sign with any team in the NBA at this point, but in practice, what it means is that the Celtics will use the “Early Bird” rights that they hold in order to exceed the soft cap when they sign him.

The NBA’s salary cap structure is crazy complicated—over time it’s become like a miniature version of the tax code.

There is a ‘soft cap’ which teams cannot exceed—except under specifically defined circumstances: You can exceed the soft cap using the following means:

And, of course, once you’ve exceeded the soft cap, you can stay above the soft cap via trades: That is, you can exceed the cap using Bird rights and then trade that player to another team and bring back a player or players that keep you above the soft cap, even if you could not sign those players outright. This is how Charlotte acquired Terry Rozier: They could not sign him outright, but they could sign Kemba Walker, so they signed Walker and the Celtics signed Rozier and the teams then exchanged them.

As Michael DePrisco points out in the article above, the Celtics are likely doing this to lock in a couple players from their summer league squad: The Celtics likely want to secure Waters to a multi-year deal, and it seems equally probable that they want to give Tacko Fall some extended NBA reps.

Page 2: Where Rich Paul is apparently not very Klutch

New Knick Marcus Morris and his agent Rich Paul have agreed to part ways, sources told the Daily News. The contentious separation comes after a controversial free agency in which Morris, 29, signed a one-year, $15 million deal with the Knicks because he reneged on an agreement with the Spurs for two years, $20 million.

The late offer from the Knicks arrived because of unexpected cap space. One of their other free agent targets, Reggie Bullock, had an issue with his physical and the Knicks are reworking his contract for a lesser salary.

Morris, according to a source, turned down a three-year, $41 million offer from the Clippers before pivoting to the Spurs and, eventually, the Knicks.

Rich Paul’s client list is certainly star-studded, what with Ben Simmons, Anthony Davis, John Wall, and of course, LeBron James. But that’s hardly an indication of Rich Paul’s skill as a negotiator. The Wizards and Sixers have little option other than signing max deals for guys like Wall and Simmons, and Rich Paul’s benefits to them are more likely to be found in networking and businesses outside of the NBA.

Where Rich Paul has been able to use LeBron as a carrot (or stick), he’s been able to get favorable contracts for his stock of rotation players (Tristan Thompson, J.R. Smith and Kentavius Caldwell-Pope being prime examples).

But then there are the poor saps that have no connection to LeBron (the Lakers almost certainly signed KCP to an above-market deal in order to grease the way for LeBron).

Marcus Morris is one of those poor saps, and it’s instructive to look at the way Paul botched Morris’ free agency.

Rich Paul is, by his own admission, obsessed with the Lakers. Marcus Morris would definitely have been a valuable asset for the Lakers, and Rich Paul may have believed that he could extract an offer for Morris’s services from the Lakers for either the same amount of money, or more. However, there was no offer from the Lakers–or any other team–on the table when Morris turned down the offer from the Clippers.

That better offer as far as Marcus Morris goes, turned out to be a two-year deal from San Antonio for significantly less average annual value ($10M vs. just under $14M). However, after convincing Morris to turn down an offer with no other offers on the table, Paul convinced Morris to accept an offer without waiting to see if better offers materialized.

Rich Paul, in a matter of a couple weeks, managed to screw Morris over twice by failing to practice Agent 101 skills (never turn down an offer for one that you don’t know is forthcoming, and never accept an offer before you know there are no other offers).

Morris is getting paid, but he had a chance to be making substantially the same amount of money while playing for a championship contender (the Clippers would have been able to sign Morris and Kawhi, as well as adding Paul George).

Vincent Poirier says on his IG story that today he realizes his “dream by joining the NBA and the mythical franchise of the Boston Celtics” pic.twitter.com/Dpq5Y3J18b

Poirier (whose English is far better than my French) probably meant ‘legendary’ instead of ‘mythical’, but hey, it’s an easy mistake to make.

Boston.com: Enes Kanter is getting a kick out of fans swapping his name on Kyrie Irving jerseys