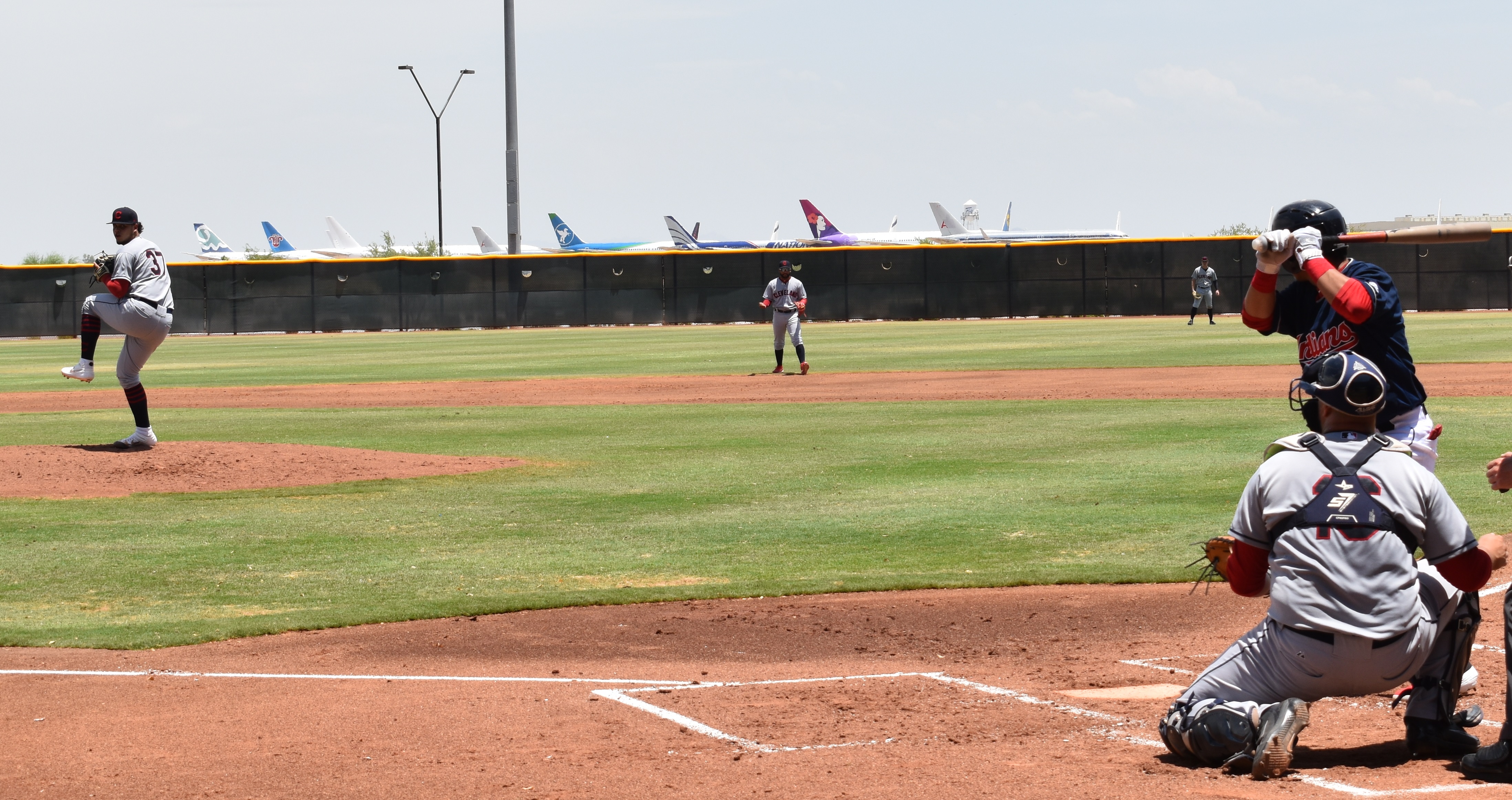 While AZL Indians Red have fallen to the middle of the pack, the AZL Indians Blue have been on fire of late and have vaulted to 18-8 and first place in the Arizona League Central. Since our last update on July 11th, team Blue has went 6-2 after a five game win streak to start off the stretch.

This stretch of dominance started with a 11-2 win over Brewers Gold that featured 15 hits including two doubles from Will Brennan (three hits total) with Jhonkensy Noel and Wilfri Peralta also adding three hits each. Julian Escobedo was not to be left out either with two hits and a walk, leading to three runs scored including one on a steal of home.

While they didn’t need great pitching, they got it including a three inning save from Randy Labaut. Labaut struggled early on this season, but was excellent this week with three perfect innings in the game on July 11th and 2.2 more without an earned run on July 17th. He now has ten strike outs and just one walk in his first 11.1 innings.

The second win in the run came against their counterparts, Indians Red, and won them the season series with just one more game to play between the two teams. Aaron Bracho lead the way offensively with a double, triple and home run, but he wasn’t alone. Brennan had another three hit game and Jeikol Contreras had two hits as they ran away with it, 9-2.

Luis D. Garcia made the start and was brilliant, throwing a season high six scoreless innings with just one hit allowed. He struck out seven and with another start on July 18th, now has 22 strike outs to six walks in 31 innings with a 2.90 ERA and .180 average against.

It may seem like deja vu, but Will Brennan had three hits again last Saturday, but don’t worry, he only had two on Sunday. Hitting lead-off, Brennan again lead the way against the Dodgers Lasorda while Noel supplied the power behind him with a double and home run. Bracho also doubled for one of three times reaching base.

Daritzon Feliz started this game and had his second consecutive great outing with no earned runs and just one hit allowed in five innings. He has improved significantly this season, but a poor outing on July 19th dropped his ERA back to 4.91 for the season.

Continuing on with the streak, the Indians Blue beat divisional rival Padres 2 on Sunday 7-2 in what could be a huge game. As of July 20th, the Padres sat 1.5 games behind Blue with a magic number of two considering the first half play-off spot. With the half way mark just around the corner, it’s worth noting that Giants Orange have already taken the play-off berth for the AZL East while the Rangers lead in the West. The Indians Red have been knocked out of contention for the first half, but still have a chance at the post-season if they win the second half outright.

Gaddis makes a start for the Indians during the 2019 AZL season. – Joseph Coblitz, BurningRiverBaseball

Back to the game at hand, Brennan did have two hits, but it was Michael Amditis’ two run home run that made the big splash. This was the first career home run for the catcher who is now hitting .300/.408/.517.

On the mound, Hunter Gaddis was electric over three innings, striking out five while allowing just one hit and no runs. The Indians 5th round pick has now made three starts in five appearances and has struck out 16 to just three walks in 11.1 innings.

The Indians may have hit the final nail in the coffin of the first half as they beat Padres 2 again on Tuesday and, you may have guessed it, Will Brennan had three more hits. Wilmer Mejia had a rough start that saw the Padres grab the early lead, but scoreless rehab assignments from James Karinchak and Gregori Vasquez helped Blue come back slowly, finishing off with four runs in the ninth and two more in the tenth.

One of Brennan’s hits was his first professional home run, but it was his single in the tenth that scored Jose Tena for the final run of the game. Noel added his fourth home run as well in the 12-10 win.

Blue took a step back on Wednesday as Diarlin Jimenez had a rough start (6.27 ERA overall through 18.2 IP) and didn’t get much help from the bullpen as they lost 6-2 to the Royals. You can blame the lack of offense on Brennan getting the game off, but Jose Tena and Cristopher Cespedes did their best by adding home runs. Tena’s was his first in 2019 while it was number three for Cespedes.

Team Blue took another L against the Brewers Blue on Thursday and again, it was a lack of offense that really cost them. Aaron Bracho added his sixth home run of the season (and thus his career), but this was the Indians only run batted in (although they scored four thanks to three errors, two passed balls and two wild pitches).

Wrapping up the week with another game against the Dodgers Lasorda, team Blue’s offense came back with a vengeance. Julian Escobedo had his first big game of the week with four hits including his second home run of the season and Bracho knocked in three as well. While Feliz had the poor start mentioned earlier, Eric Mock was the hero out of the bullpen with three scoreless innings.

Brennan went hitless in this game, ending his 12 game hit streak and 16 game on base streak, but was still the player of the week. He currently sits at a .356/.423/.522 line for the season, largely thanks to that streak of five multi hit games to start the week. Brennan has had one of the most advanced bats on Indians Blue and it was only a matter of time before he really started to make the opposition pay.

The other big hitter of late for Blue has been Bracho. He missed all of extended spring and was well behind the rest of the team when the season started, but has reached a .293/.423/.680 line now thanks to an incredibly torrid July. So far this month, Bracho has hit .383/.500/.894 with two triples, five doubles and five home runs. Bracho is now 8th in the entire AZL in wRC+ with 170, just above Yainer Diaz (who has been promoted to Mahoning Valley) and just below Escobedo.

Speaking of promotions, team Blue will be without the services of Joab Gonzalez from now on as the long haired short stop was promoted to Mahoning Valley as well on July 14th. Jesus Maestre has been activated from the IL and Andrew Velazquez has been added on rehab assignment to help fill the gap in the infield.