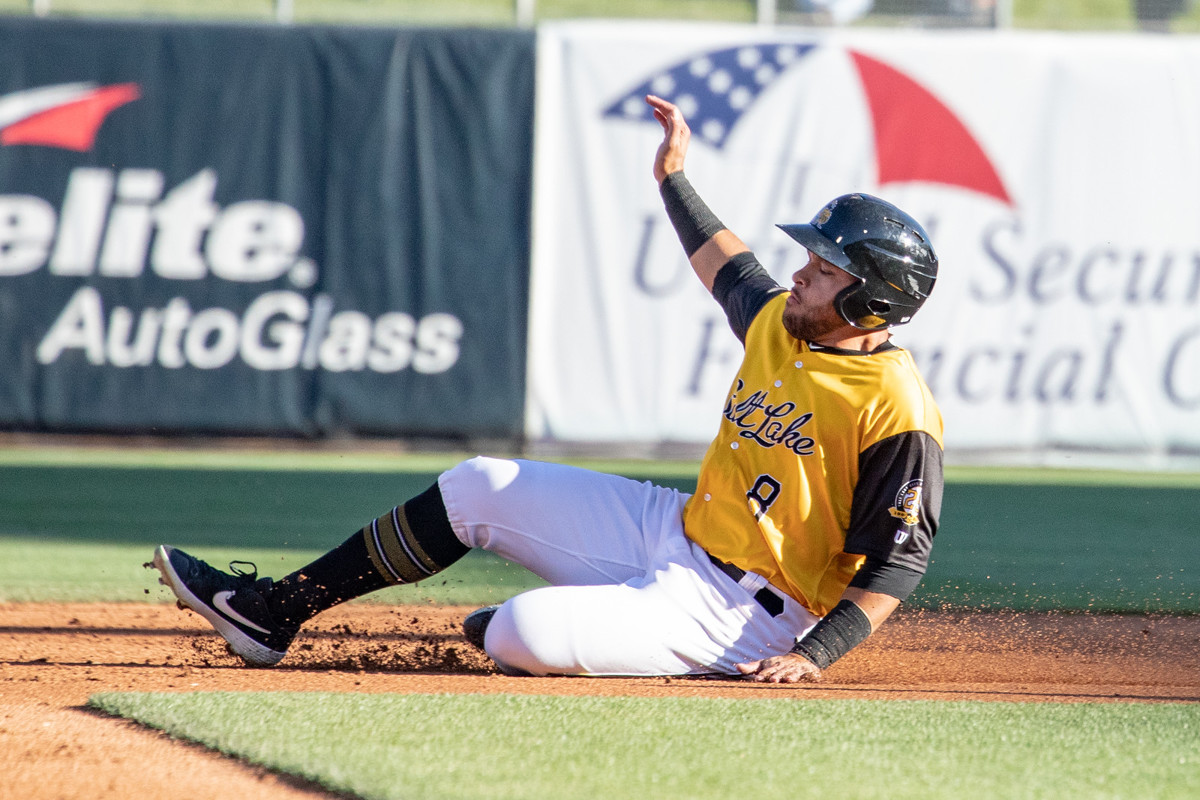 Multiple Angels position players continue to post video-game numbers down on the farm, with Jose Rojas continuing to be an absolute force and a hotlist stalwart. A couple new names break into the top this edition, including an unexpected outfielder. On the other side, the Angels pitching performances have shifted as summer takes hold, with early season dominance exhibited by many having waned, now giving way to steady, continued solid production from numerous young arms.

A hotlist mainstay this year, Jose Rojas’ recent play might just be the most impressive two-weeks yet. Following a stint where he played DH primarily, Rojas returned to the field, splitting time at 1B/3B evenly with DH, as well as a quick appearance at 2B and even on the mound, pitching one scoreless and allowing one hit and one walk in a tight game. Perhaps this return to the field hints at an imminent call-up, as Rojas’ defense has long been the shortcoming for his MLB viability. But enough about all that. Let’s talk about what Rojas did at the plate, slashing .490/.544/.941/1.485 with 8 doubles, 5 homers (13 extra base hits) in 57 plate appearances, coupled with a respectable six walks to 11 strikeouts. Jose Rojas is now second in the Pacific Coast League in total bases (225), which is more than top prospects (who have similar playing time) such as Isan Diaz (198), Kyle Tucker (193), and Mauricio Dubon (178). At this point, it’s likely only a matter of time before Rojas makes his MLB debut, either in Anaheim or elsewhere, packaged in a trade for pitching.

It’s getting difficult to find new things to say about Taylor Ward’s AAA production – will it ever translate to MLB success? The combination of contact, power, and plate discipline offers a lot of evidence that there’s something there, and it might come down to which team – the Angels or otherwise – will give Taylor the full season or so of consistent playing time to see if it’s true. Playing exclusively left field over the last two weeks, Ward’s signature AAA production continued, as he slashed .367/.426/.735/1.161 with six doubles and four homers, while swiping two bags and walking four times versus nine strikeouts. Like Rojas, Ward’s defensive liabilities might make an Anaheim future hazy, so he too could find himself mentioned in trade talks in the next ten days.

Jackson added his third and fourth two-homer games to his season in the last two weeks, and hit a total of five over the last two weeks, leading him to a SLG-heavy slash of .283/.306/.696/1.002. Discipline continues to be a bit of an issue for the young infielder, as he drew only two walks to sixteen strikeouts, but the power is real, even if aided by the hitting-friendly environs of the Pioneer League. Hitless in only three games the last two weeks, Jackson at least compliments his raw power and iffy discipline with good contact skills and has yet to be a defensive liability. Grouped with other young infielders like Wilson, Soto, Maitan, and Rondon, the Angels might have a new wave developing in the lower ranks to match up with the Rengifo, Fletcher, Ward, Thaiss, Walsh, Rojas wave currently impacting SLC/Anaheim.

Often forgotten among Angels outfield prospects, overshadowed by the much flashier names with louder tools, Brennon Lund is a name often omitted when discussing future OF plans. A pedestrian debut at AAA Salt Lake (hitting .177 in his first 33 games/140 plate appearances) did nothing to help that, but since May 19th, Lund had quietly put together perhaps the best season by an Angel outfielder not named Adell, slashing .328/.388/.556/.943 over 51 games and 214 plate appearances. The last two weeks, that trend has been maintained, as Lund slashed .372/.413/.581/.994 with five doubles, two triples, drawing three walks against seven strikeouts. Sound defensively at all three outfield positions and equipped with decent offensive skills across the board (contact, discipline, little bit of speed, little bit of pop) Lund is due to be eligible for the Rule 5 draft this winter, giving him a decent chance at being added to the 40-man. Paired with the more high-risk/high-reward Hermosillo, the two should make up a solid 4th/5th OF rotation for the Angels next year – should neither be dealt for pitching help.

Rondon has kept pace since his appearance on last edition of the hotlist, as the infielder also earned a promotion to Low-A Burlington. Playing mostly 3B, Rondon has played second at both games in Burlington, and picked up a game at SS and 1B while in Orem. What’s kept Rondon on the list though is his offense, which continues to progress, giving the Angels some hope he might be realizing the potential that made him one of the best international amateur talents a few years back. Slashing .348/.362/.630/.992 with six extra-base hits (2 doubles, a triple, and three homers), Rondon continues to display a strong, balanced offensive approach. Burlington will be a test for the young infielder as he moves away from hitter-friendly Orem, but a strong showing could vault him back into the lower-hald of the Angels Top 30 – if not higher.

Eight straight multi-hit games lifted Orem infielder Will Wilson to a .396/.420/.563/.983 slash over the last two weeks (he’s hit .486 during the streak), highlighting the strong offensive profile that led the Angels to pick Wilson in the the first round of the 2019 draft. Being a little advanced for the league, Wilson might soon find himself alongside Adrian Rondon in Burlington for a look at more age-appropriate talent, and continued strong performance there could even place Wilson in A+ Inland Empire to start 2020, giving him a potential Anaheim arrival as early as 2021. Wilson hasn’t produced the best BB:K ratio through ~100 plate appearances, though this is likely only a product of being aggressive while swinging the bat well.

Three more solid games for the Angels’ 2018 4th rounder in his debut season, a year that will probably see Bradish locking himself into a spot onto various publications ‘Top 30 Prospects’ for the Halos, perhaps placing Bradish in the conversation for MLB action as early as 2020 in a spot-starter/multi-inning relief role. Across these most recent three appearances, Bradish posted a 2.16 ERA and .190 BAA in 16.1 IP, allowing only three walks to 19 strikeouts. Bradish has only allowed more than 4 runs in an appearance once, kept the ball in the yard (only 6 HR allowed in HR-friendly California League), and has that blend of decent GB% (46%) and swinging strike (15%) that Eppler likes, a little similarly to what the Angels had hoped to get from Trevor Cahill. Bradish might earn a AA promotion before the season is out, and is likely to start 2020 there.

While Ortega’s most recent three appearances do not come with the shiny ERA we’ve grown accustomed to seeing from him – 4.41 ERA in his last 16.1 innings – the peripherals continue to indicate Ortega’s development and rapidly improving stuff. The righty fanned 22 in those 16.1 innings, allowing 5 walks and 10 hits (.172 BAA), giving him an organization-leading 112 strikeouts and and K/9 rate of 11.7. Having only allowed 62 hits on the season, Ortega’s ability to limit hits and rack up strikeouts could fast-track the 22-year old to Anaheim next season as a multi-inning reliever, much like Luis Madero. Eligible for the Rule 5 draft this offseason, the Angels will need to protect him on the 40-man, a move which is seeming increasingly certain.

Beasley continues to do Matt Shoemaker things in AA Mobile, a skill which keeps him in the 2020 mix for a spot-starter/multi-inning relief role with the Angels. Beasley worked three more starts, posting a 3.14 ERA and .241 BAA in 14.1 IP, walking four, striking out 13. One poor start – 7 ER on May 10th – has been Beasley’s only real blemish on the year. With that start removed, he has posted an incredibly strong 3.02 ERA in essentially 18 starts. Overall, his 19 ‘starts’ (one was a tandem-relief appearance) leads the Angels organization, a sign of Beasley’s resiliency. Not eligible for the Rule 5 until after the 2020 season, Beasley will likely continue to percolate in the minors as he doesn’t come with the pedigree of other prospects, but once he reaches AAA, a strong showing could change those opinions.

A 20th round pick in last year’s draft, Kyle Tyler has never drawn much attention as an Angels farmhand, until a string of solid performances placed him on the last edition of the prospect hotlist. Since then, he’s done nothing but continue to impress, delivering two more appearances totaling 12 IP, only allowing three hits, six walks, zero runs, and striking out nine. Going back to June 7th, Tyler has posted an eye-popping 1.19 ERA across nearly 40 innings, only allowing 20 hits in that time – good for a .156 BAA. In fact, Tyler has been quietly ‘dominant’ this season – in essentially 17 ‘starts’ (multi-inning RP/tandem starter) he has allowed six runs three times, three runs twice, and then zero or one run in the other twelve games. While he doesn’t post big strikeout numbers – only 71 in 83.1 IP – and only a 12% strike-swinging rate, it’s fair to say Tyler has probably been the lucky recipient of some good luck and defense, but a .195 BAA on the season is hard to ignore as the summer continues on.