Favre or Rodgers? Who Would You Choose Between Packers HOF QBs? 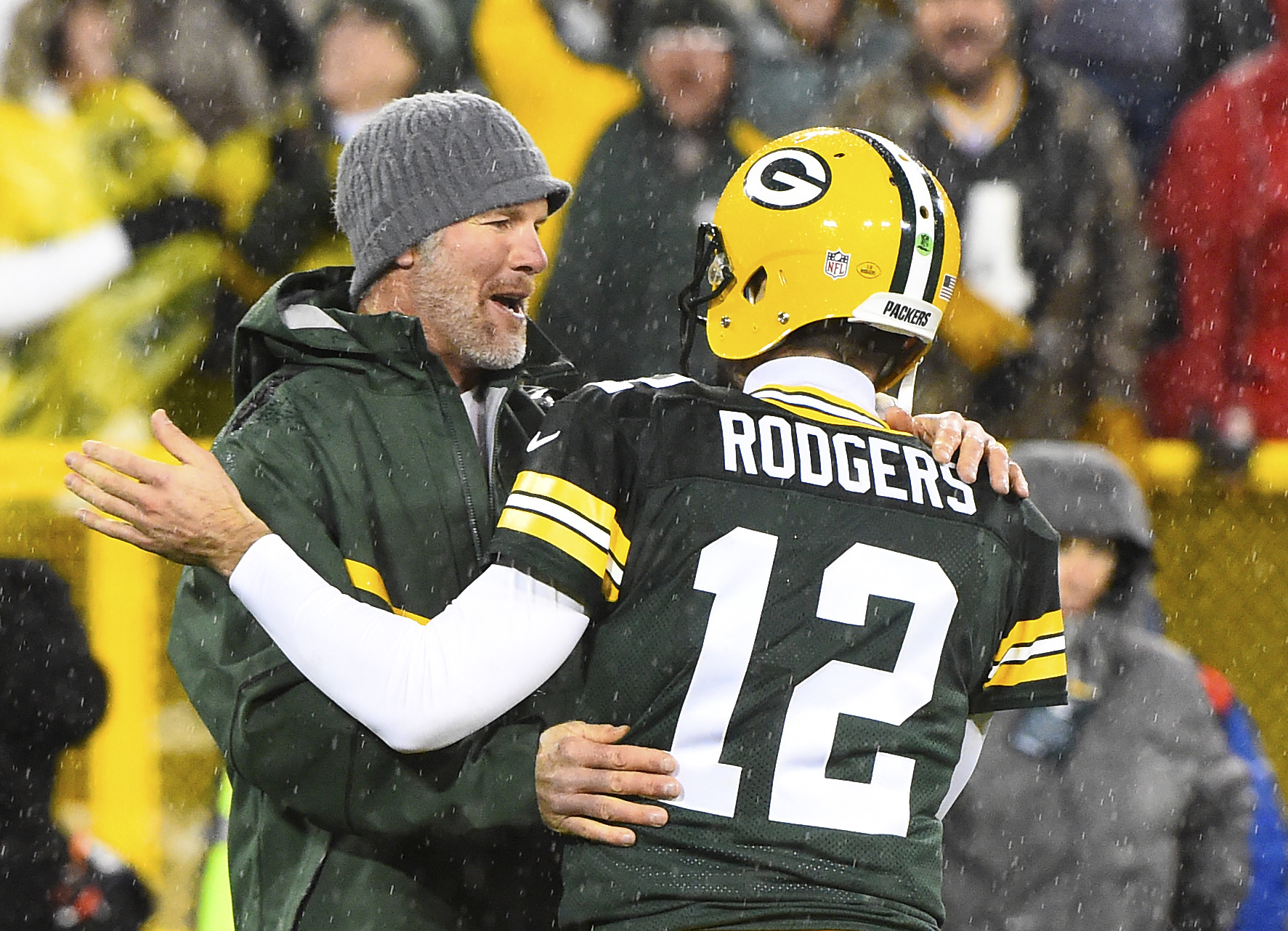 Favre or Rodgers? Who Would You Choose Between Packers HOF QBs?

The Green Bay Packers have been blessed with two Hall of Fame starting quarterbacks back-to-back, something that doesn’t happen too often in the parity-driven NFL. In 1992, GM Ron Wolf traded for that Atlanta Falcons’ third-string quarterback, Brett Favre. Favre remained the Packers starter through the end of the 2007 season. Then, Aaron Rodgers took over under center. He has remained the Packers starter through the present day. That’s 27 consecutive seasons the Packers have had a Hall of Fame quarterback leading the team.

But the question must be asked: if you had one game to win or one quarterback to build a championship team around, who would you choose: Favre or Rodgers?

Here is a breakdown of all the statistical areas and an analysis of which quarterback comes out on top.  The analysis is only based on each players’ time with the Packers so Favre’s time with the Falcons, Jets and Vikings are not taken into consideration.

Here is a brief statistical comparison:

Record as a starter:

Favre’s was 5.0 while Rodgers has a career touchdown percentage of 6.2. Keep in mind, Rodgers played in an era where passing was easier than Favre’s time in the league, but still, the difference between the two numbers is significant despite the two eras.  Edge: Rodgers

Rodgers’ biggest edge comes in this area. Favre was a gunslinger who had so much confidence in his strong right arm that he was not afraid to throw the ball to anybody at any time in any way (underhanded, backhand flip, etc). While the results were often thrilling and unexpected, they also resulted in a fair number of interceptions which often drove Favre’s coaches crazy. At the time of his retirement, no quarterback in NFL history had thrown more picks than Brett Favre’s 336 (286 with the Packers). Favre’s career interception percentage with Green Bay was 3.3.

Rodgers prides himself on not turning the ball over. In 2018, when he was playing hurt all season and had an “off year,” he still threw only two picks in 16 games. For his career, Rodgers has thrown only 80 interceptions in 5,492 regular season attempts for a microscopic interception percentage of 1.5. Big Edge: Rodgers

Nobody can question the durability of Brett Lorenzo Favre. The Kiln, Mississippi, native took over as the Packers starting quarterback in Week 4 of the 1992 season and started every game, regular season and playoff, until the end of the 2007 season when he left Titletown. That’s a total of 275 total games in a row (253 regular season and 22 postseason). During the streak, Favre played through numerous injuries including a broken thumb, a sprained ankle, right elbow tendonitis (that’s his throwing hand), a sprained right knee, several concussions, a sprained right hand, an injured ulnar nerve in his left elbow and bone spurs in his left ankle.

Rodgers has also played through pain and managed to play well when banged up. He played all of 2018 with a hairline fracture of his knee and suffered through several concussions and nagging calf injury. However, unlike Favre, Rodgers has missed significant playing time over the course of his career due to injuries including two broken collarbones. Rodgers is tough and plays hurt, but there’s no topping Favre in this category. Big Edge: Favre

Both Favre and Rodgers have put up good playoff numbers and both quarterbacks led the Packers to one Super Bowl victory. Favre helped the Pack to a second consecutive Super Bowl appearance after the 1997 season, but the Pack lost to John Elway and the Broncos 31-24.

Overall, Rodgers’ postseason record is 9-7 (a .563 winning percentage) while Favre’s was 12-10 (.545). Favre led the Pack to 22 postseason contests, so far Rodgers has played in 16 playoff games. Despite playing six fewer games, Rodgers has just three fewer touchdown passes than Favre (36 for Rodgers, 39 for Favre). Rodgers has also thrown just 10 interceptions in playoff games as compared to 28 for Favre. Overall, Rodgers has a slightly higher winning percentage and a higher quarterback rating than his predecessor (99.4 for Rodgers, 85.2 for Favre). Edge: Rodgers

It is impossible to measure leadership with straight statistics. The two Packers legends had very different leadership styles. Favre was “one of the guys.” He was a fun-loving, playful, prankster while remaining tough and competitive. Most of his teammates truly loved the guy.

“I was fortunate I got to play with Brett Favre for nine years,” former Packers guard Marco Rivera said. “His presence in the huddle, his leadership, it forced everybody to play better. You had to bring your ‘A’ game when you’re going to be in Brett Favre’s huddle.”

Pro Bowl safety LeRoy Butler had this to say about Favre’s ability to unite his teams.

“It’s nice when organically, someone can fit in with everybody else and Brett did that. When he came in the locker room, he didn’t wait for people to come over to him. He went over to people. And that wasn’t publicized. He didn’t want the publicity of that.

“But he was an unbelievable teammate. I’m telling you, no quarterback has ever done that, to realize there’s so many different cultures in the locker room and he could fit in with all of them. And he fit in.

Rodgers’ leadership has been more controversial. He won a Super Bowl MVP and two league MVPs (to Favre’s three). But many ex-teammates and members of the media have questioned whether Rodgers’ leadership style is a positive trait or is more divisive.

Former receivers Donald Driver and Greg Jennings, who played with both Favre and Rodgers, have both been critical of Rodgers’ leadership style at times.

Driver added, “We’ve always said that the quarterback is the one that needs to take the pressure off everyone else. If a guy runs the wrong route, it’s easy for the quarterback to say, ‘Hey, I told him to run that route’ than for the guy to be like, ‘Well, I ran the wrong route.’ Sometimes you ask Aaron to take the pressure off the guys so we won’t look bad, but he didn’t want to do that. He felt like if you did something bad, you do it.”

But Rodgers has shown leadership throughout his career. His “R-E-L-A-X” quote in 2014 helped the team recover from a slow start to the season. He has led his teams to countless late game and late season rallies.

“There’s no one else who can do what he can do,” left tackle David Bakhtiari explained. “He’s Aaron Rodgers for a reason.”

Favre himself was less critical of Rodgers. “Honestly, I know people want to (ask), ‘Who’s the best player in Packers history?’ People want to pick sides. I’m not picking sides. I could care less what people say either way. I think Aaron is a great quarterback presently, one of “the all-time greats in the league itself and will be remembered as that. I’m really proud of him.”

While leadership is not something that can be measured by pure statistics, Favre’s reputation for leadership seems to outweigh Rodgers’. Edge: Favre

Here is a thorough statistical breakdown of the two star quarterbacks and their Packers’ statistics:

Favre’s NFL career is over. The Packers have retired his number “4” and he has been inducted into the Pro Football Hall of Fame. Rodgers still has several seasons remaining to add to his numbers and his legacy. Certainly, another MVP season or Super Bowl title by Rodgers would change the tenor of the discussion dramatically. But, as of right now, through the end of the 2018 season, who would you choose if you had one game to win? Or if you were starting a team from scratch? Favre in his prime or Rodgers in his?