Learning the system is the key to Gruden's heart for Haskins, Keenum

Learning the system is the key to Gruden's heart for Haskins, Keenum

As the 2019 Washington Redskins training camp looms, so does the drama of a quarterback competition featuring two completely new faces, battling to become the 28th Redskins starting quarterback in 27 years.

The case for this latest installment at the position began with Alex Smith’s grisly leg injury in the middle of last season, which was just as horrifying as the team’s luck after committing $94 million to him. Now, after a bit of more spent cash along with the advantage of a high draft pick, welcome to the arena Case Keenum and Dwayne Haskins. 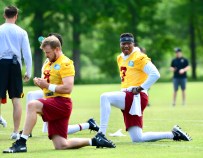 While these two don’t quite carry the caliber of a Montana-Young duel, they certainly aren’t Beck-Grossman either. On one side, you have an experienced vet coming off two consecutive solid seasons under his belt and the signal caller in one of the most memorable playoff moments in recent history. In the other corner is a top draft pick much popular to fans with the mechanics to become a star. Both will give you reasons why to love them, and both will tell you why they should not be close to being the starter. Get your emotions in check.

Haskins returns to the DC area as the sexy hometown stud and the leading prospect to become the team’s long-term solution at quarterback. While beating out Keenum comes off as a long shot at first glance, there are some advantages for Haskins if he blows enough minds. At 6-foot-3 and 230 pounds, he certainly has the physical assets and looks the part. 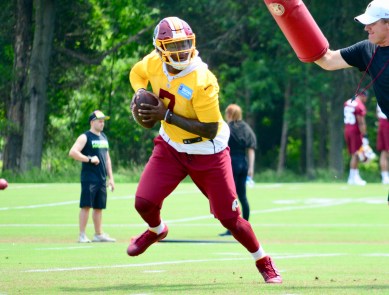 To win Jay Gruden’s heart, it starts with adapting to his system – something Gruden has stressed about when grading his quarterbacks. The good news for Haskins is that Gruden’s system is relatively fresh to Keenum as well, which may help to speed up Haskins’ early development if he can take advantage and pick things up quickly himself. The rest Haskins will need to leave on the field.

Word out of OTAs, however, has it that Case Keenum had shown poise and is at a faster pace in learning Gruden’s system. Poise is a wonderful trait to have if you’re an NFL quarterback, as it entails a substantial level of familiarity and comfort. Having been an NFL quarterback for 9 years, Keenum naturally has the upper hand over Haskins in that department. We’ll have to see how that translates for Keenum in training camp.

As is the case with most dramas coming out of the Nation’s Capital, a stench of politics is involved, strong enough to influence a major decision – like a professional football team’s starting quarterback.

We also know Jay Gruden likes his quarterbacks to learn the system well and expects them to produce efficiently within it. This includes the ability to play off schedule when a play breaks down, something Gruden appreciates and the Redskins need. Advantage: Keenum.

Will different ideologies among the coaching staff and front office clash again? Moreover, how will the lack of job security for Gruden impact how he manages…or mismanages… this situation?

Fun times are upon us, Redskins fans. You’ll want to buckle up for this quarterback carousel.