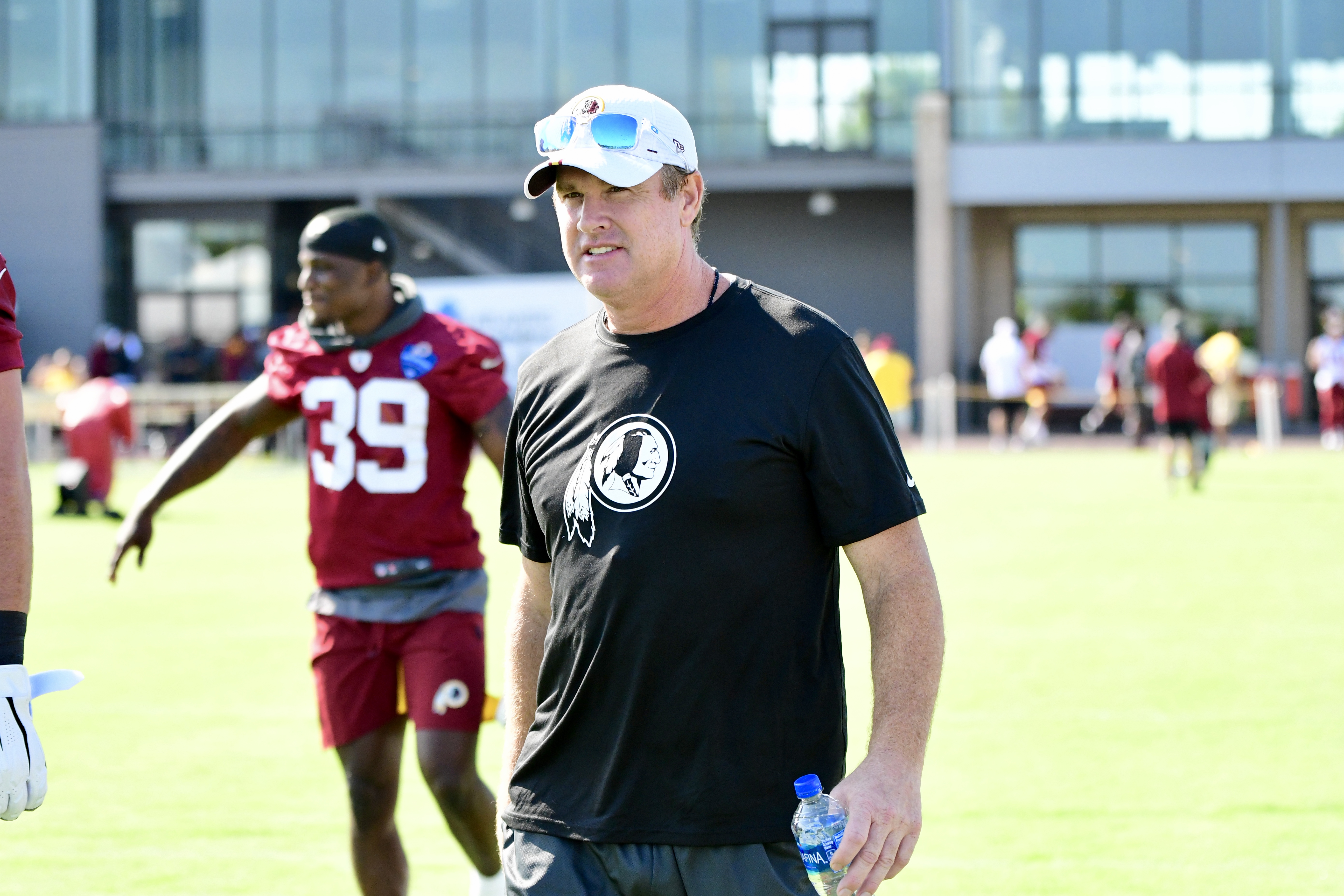 On DC Greg Manusky being able to turn defense around:

“I think wanting a consistent approach on defense. I felt like from a youth standpoint, we had a lot of good things going defensively, especially with the defensive line, outside linebackers, interior linebackers, corners, safeties – just give him a few more pieces to work with – and adding Landon Collins has helped quite a bit. Get another first-round draft pick like Montez Sweat will help. Colt Holcomb will help out a lot. Give him [Manusky] some more [talent] and I think he is going to be just fine.

On if he adds instruction to Manusky’s defense:

“No. I think the big thing is as a teacher and as a coordinator, is to make sure everyone’s one the same page. It’s all about communication on defense. I think we have enough firepower talent-wise to hold our own and be a hell of a defense. Now it’s about communication, and handling all the things that offenses are doing nowadays with RPOs, empties, motions, and all the jet sweeps, and all the stuff, we have to be sound in our communication. That’s something we really have to work on through this training camp.” 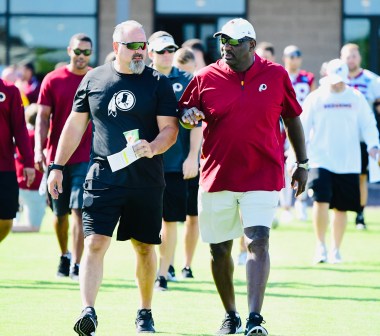 “I think the one thing that you can’t gauge – and it’s still early – but it’s the poise factor. I think he’s got great poise for a young player. You watch him in college, he had great poise. He played at Ohio State and he had some big-time games and the poise he displayed in the pocket carried over to the OTAs. People were around him, I know he knew he wasn’t getting hit, but still, his ability to move his feet in the pocket, kept his eyes downfield, and make plays outside of the pocket was very exciting. I think he’s got a great demeanor about himself. I don’t think he lets one play affect his next play, which is very very important for a quarterback in the National Football League.”

On defense complementing the offense:

“I think it’s important for our defense to hold down for 16, 17, 18, 19, 20 weeks. We have to be a great defense for sure. I think some of the great teams that have won Super Bowls have always been able to stand and lean on their defense and that’s what we’re trying to get to here. Offensively, we have to make sure we play smart. When we were 6-3, we were playing good defense, and we were not turning the ball over, and we were playing field position. We weren’t winning pretty, but we were winning games. That recipe can hold true for a very long time if we are playing great defense. We expect our defense to do that.”

“We had high hopes for him coming out of training camp [in 2018]. He’s big, strong, and physical, plays with a great motor, passion, and unfortunately had an injury after one play, I think, in a game. So, getting him healthy, watching him work to get himself ready for this time, this opportunity again, I think he’s going to take advantage of it. He’s got a skillset that coaches look for – height, weight, speed, toughness – he’s got them all. We’ll see how he does. We got great competition in that room. 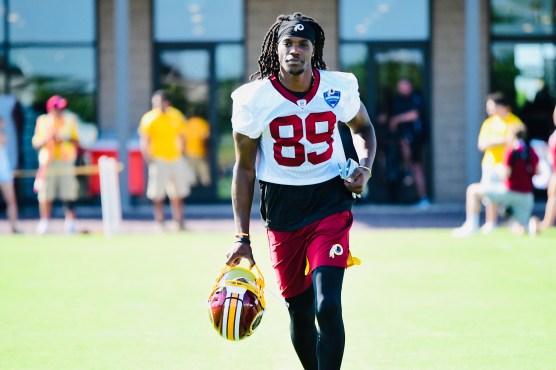 On the rehabbing process for RB Derrius Guice:

“There’s a fine line between babying them and maintenance, and I think we have to keep our eye on the difference, and I think we got to get [Derrius Guice] going. He needs to work. He only got training camp, the offseason program, and about two weeks of preseason games last year, so he needs to work. He needs the looks, he needs to see the runs – his footwork, his fundamentals, his pass protections, all that – but we do have to keep an eye on him and he’s got to be honest with us [about] how he’s feeling. I think it works hand-in-hand – the player has to keep in close contact with the trainer and the coaches and we have to keep in close contact with them.”

On Guice playing in preseason games:

“I think we have to [see him in preseason games]. We have a pretty good running back comparison to what Samaje Perine did in the offseason program – it was very impressive, and the way he’s grown his body and gotten stronger and stronger and faster, and he’s got a better grasp of the offense as well. It’s not like he’s a 10-year veteran now; he hasn’t played a whole lot either, but he’s getting a better feel for it, too. And, obviously, having Adrian [Peterson] and Byron Marshall, Chris Thompson, and, you know, we got a couple other guys that I’m excited to watch.” 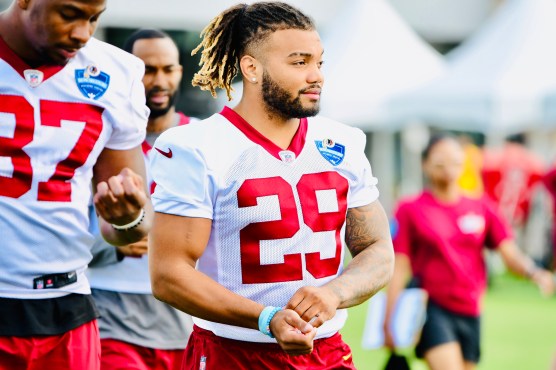 “I think we just have to play it out. I think we just have to be aware of making sure people get challenged in critical situations, as well as first, second down, throwing a bootleg – got to make sure we push the pocket a little bit, get them some drops and some throws against us in pass rush, and some different looks. So, it’ll be a good challenge for us. I think, obviously, that’s the number one challenge that we have as a staff going into this season is to make sure we get those guys the reps and give them ample opportunity to succeed and show that they’re the starter.” 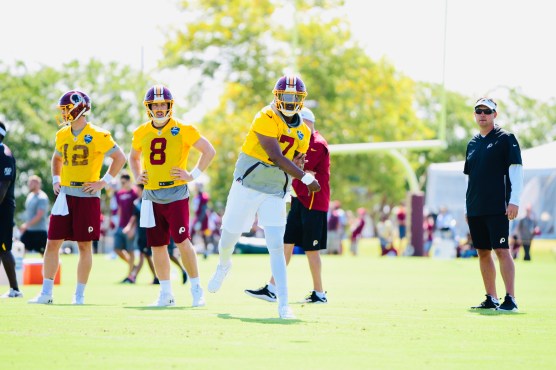 On using preseason games to monitor the reps:

“That’s something we haven’t talked about yet. We’re just in the first day of training camp. We’re going to see how it goes. We’re going monitor the reps closely. It could be one day, a couple guys get the majority, and one guy may not get many that day, or it could flip the next day. We just have to make sure to keep a close tab on it, make sure everybody’s getting the fair shake.”.”

“Well, I like the way he has taken on to coaching, you know Chad Grimm (Outside Linebacker Coach) has done a great job with him so far and I think he has picked up the scheme pretty well so far. There is a lot for him to learn and adjust to but there are certain things you can’t coach and that is his height, his speed, his length and his ability to find the football and run to it. It is very exciting. I think he has got a great future here without a doubt and wouldn’t have traded for him in the first round if we didn’t think so. He has shown us why we did what we did to get him.” 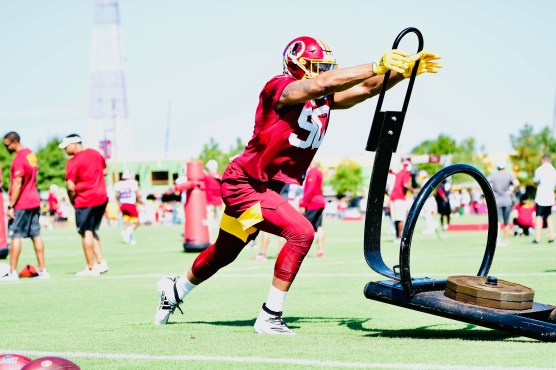 On the process of getting Guice back to form:

“Yeah our goal is… he only had what 10 carries in the preseason so we don’t know who he was. We know that he had a great college career at LSU and his sophomore year was incredible. His junior year he had over 1,000 yards. In training camp, I think the one thing that he showed us that we really didn’t know about at LSU is his ability to catch the ball and that is something we are going to continue to work on and see if this is something that we can put a roll in for him out in the backfield as well similar to Chris [Thompson]. Our goal is to get him ready for Week 1. His job is to make sure his body is right and the trainer job, strength and conditioning coaches, that is their job. I have seen no reason to believe that he won’t get to where he was as a sophomore in college.”

“There is no update on Trent.”

“We got Ereck Flowers being an offensive lineman. If everything went perfectly there is a chance that we move him to guard. If everything doesn’t work out then the great thing about Ereck is that he has played both left tackle and right tackle, so odds are we start him out at tackle in training camp up here. Get Wes Martin and some of these other guys some reps at guard, Zac [Kerin]. It is a good opportunity for those other guys and a good opportunity for Ereck to get back out there at tackle, because you know you can never have too many tackles anyways.” 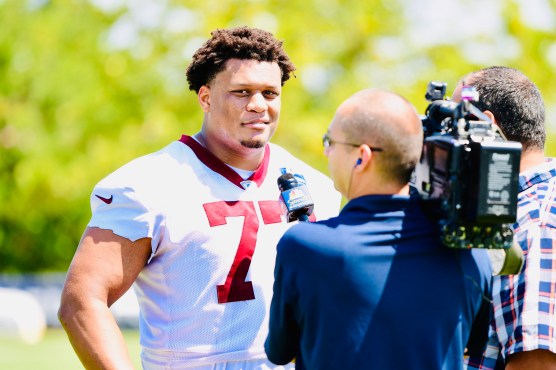 On the 2018 season without RB Derrius Guice:

“Derrius has great energy for sure. He’s always bouncing around. Love his energy, passion for the game. You know, we were excited about that last year, it got cut short, but I think he’s been great as far as rehab is concerned. We’re hoping the other guys take suit. You know Cam Sims was great in rehab. A lot of guys have done that. We’re hoping Reuben Foster is great in the rehab process and can still continue to be a part of this football team – Alex Smith. So anytime you lose a player – their passion or energy for the game, it hurts a little bit, but we’re also excited to see them come back and watch what they can do based on all the hard work they put in to get to where they need to be.”

On the importance of keeping TE Jordan Reed healthy:

“Well it will be very important. You know I think Jordan is very very good. You know, I think these guys need the work and you got to keep them healthy, but they still have to work on their cut off blocks on weak side inside zone. They got to work on their base blocks on runs right at them. They have to work on the reach blocks while they’re working on their pass routes reading man to zone, separating and catching the ball in traffic. This is something that tight ends have to do. It’s one of the toughest positions in sports other than quarterback, I think, because you got to be part of the running game big time. You got to be part of the passing game. You got to be part of the audibles. You still have to be able to hear the pass count on the road when you’re [lined up] far away. So, it’s a tough position to play and they need the work, so, Vernon [Davis], Jordan, very important to this team.” 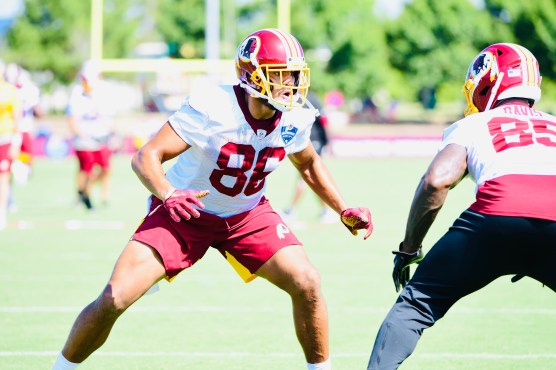 On which position group needs to continue to improve: