On the defense’s performance and maintaining consistency:

“Stop the run, first and foremost. Whenever we had success last year, we stopped the run real well. The first Dallas game, we held their running game – which is really good – to thirty some yards rushing. We played really well and won the game. The first New York game, held their good running back to thirty or forty yards, won the game, and played really well defensively. The second time we played those teams didn’t stop the run and we played pretty poor, overall defensively, and we lost both games. Stopping the run is going to be the key for us because… on paper, it’s proven. It’s what we need to do.”

On the importance of defensive scheme:

“I mean, I think its guys winning individual matchups. It’s playing to what the scheme needs us to do and just being where you need to be.”

On the impact of LB Jon Bostic and LB Shaun Dion Hamilton:

“Seeing Shaun Dion work over the past couple of years and seeing how he’s come back from the injury he had at his senior year at Alabama, I am excited to see what he can do. He’s athletic, he’s fast, and he’s confident now. That’s one of the things I was talking about with him today. He was like ‘Man you know it’s amazing you have a year in your system, you have a year to continue to get your body right from the injury he had,’ He’s like, ‘I just mentally am more sure of myself and more confident.’ Jon Bostic, a guy who has been playing for a long time – there’s a reason for that. He’s good, he makes plays, he’s real sudden with his movements and gets where he needs to be efficiently.”

On DL Jonathan Allen’s quote: “We got the pieces, but pieces don’t win games.”

“I think that is well said by Jon. You know, on paper, we are really good right now. If you look at our front seven, we feel really good about our front seven. You look at our back end; we made a lot of big additions there with Landon [Collins] and Josh [Norman], a few years back. We have a chance to be really good, and we have got to stay healthy. Everyone has to buy into the scheme, and know what they have to do on each play. When you have mental errors, when one mental error happens that can ruin a whole play for a defense. If everyone knows what they have to do, and knows where they need to be, that’s taking the step towards being a great defense.”

On if the changes in the coaching staff help improve the defense:

“I mean Rob (Inside Linebackers Coach, Rob Ryan), Ray Horton (Defensive Backs Coach) those are guys that have been around in the league for a while. They have seen a lot of things. They have been [defensive] coordinators. They know ball. They’ve been around the block a time or two, coaching wise, so they know how to get the most out of guys. I think especially with a lot of the guys we have in the secondary, I think that’s going to be really good at bringing in a guy like Ray.”

“Yeah, it is weird. It’s been you know me, him, and [Nick] Sundberg kind of the elder statesmen, the longest tendered guys here. It’s weird not to have him here. I obviously hope everything works out and that he’s back here. He’s not only an elite offensive tackle, he is the best offensive tackle in the game, and I know a lot of guys will say that their teammate is but I can say with confidence that Trent is that. We need him on this team. I hope he’s back here sooner than later.”

On the differences between T Ereck Flowers with the Washington Redskins than with the NY Giants:

“It’s tough to say. It’s early on. I mean he’s been playing tackle. He’s been playing guard, so it’s tough to have a totally strong opinion about where’s he at, but I know he’s a guy with talent. I mean, he was a first-round pick and a guy that’s played a lot of games in the NFL. So, hopefully he can work with Coach [Bill] Callahan get coached up well and be a good force for us.”

On his opinion of preseason games needed to prepare for the regular season:

“I certainly think there’s value to it. It’s tough to say how many preseason games you really need, I mean four is [has] been a topic of discussion the past couple years, I think a lot of people would agree that four might be couple too many for preseason games. There definitely is a lot… coaches have a lot of evaluating to do in the preseason, it’s tough to do all that through practice, when you’re not tackling, you’re not playing full speed, you need the games from that standpoint. Whether you need two or four, I think, I don’t know if you really need four of them.”

On the number of weeks needed in the preseason:

“That’s a good question. I hadn’t really thought about this totality of the preseason. I’ve more so thought about the games. It is a long time – six weeks – before you play your first game. I don’t know if you necessarily need that much time, because usually after a couple weeks you’re feeling okay. I’m feeling like I got my football legs underneath me, I got my football wind underneath me, so yea I mean it might be, five or six weeks might be a little long too.” 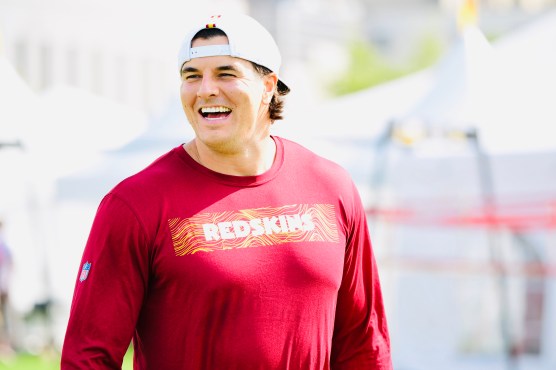 On the potential of LB Montez Sweat:

“I think he is going to make a very big impact. He is going to be able to have a very long career and very productive career if he works like he has been and just continues to maximize his potential because his potential is through the roof. It’s like you just said, ‘a guy that big shouldn’t be able to move like that,’ as fluidly and as quickly as he does. He is a guy that can make a lot of money playing this game and I am just excited to get to watch him develop in these early years of his career.”

On addition of Sweat helping him improve:

On LB Jon Bostic’s transition and ability to make the correct calls:

“Yea, it is impressive and this is not an easy defense to learn quickly. We have a lot of calls. We have a lot of verbiage, a lot of adjustments off each call. This defense puts a lot of on the Mike linebacker so whether he’s ready or not, you have to make those calls and be ready to make them and it was a good day out their today and hopefully he can continue to learn and progress.”