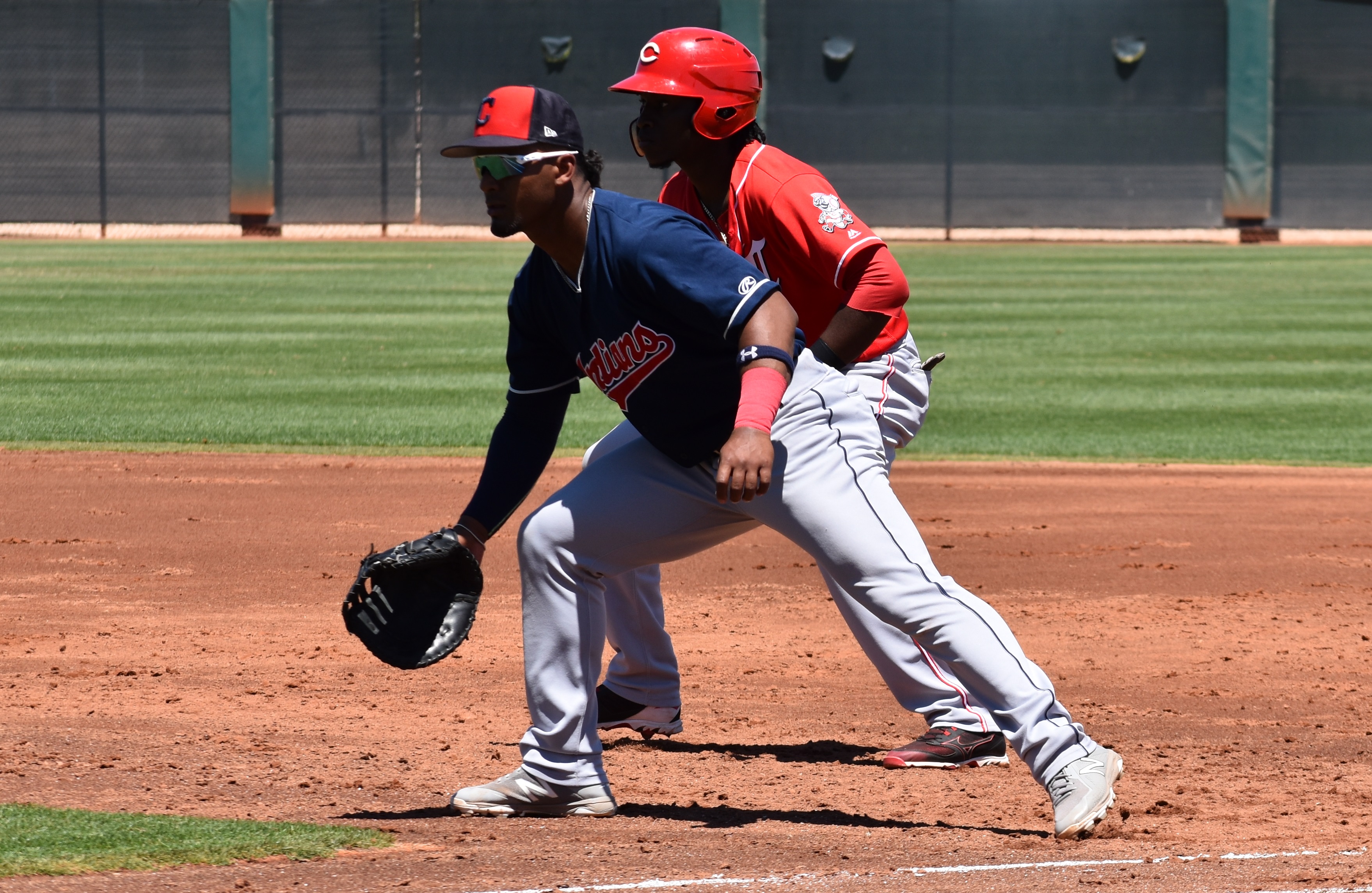 Now that Bobby Bradley has made it to the big leagues, there has been a massive shift in the Indians minor league first base ranking. Bradley has been the #1 ranked 1B ever since Burning River Baseball started ranking prospects in 2016 and, in addition, Emmanuel Tapia (#6 in 2018), Simeon Lucas (#7), Anthony Miller (#9) and Christopher De Jesus (#10) have all been released since last season. Nellie Rodriguez (#3) has also been removed from the top ten after becoming a minor league free agent, then resigning with the Indians in 2019.

By David Wood
Medina is currently playing for the Akron Rubber Ducks where he is actually listed as an outfielder. He is behind both Wilson Garcia and Nellie Rodriguez on Akron’s depth chart at first. Over this past weekend Akron played Alexis Pantoja ahead of Medina at first base. Pantoja has mostly played middle infield and third base until very recently. It is probably not a good sign for Medina that Pantoja is getting first base reps ahead of him.

As far as Medina’s potential as a prospect goes, the first step for him is to get healthy and stay healthy. So far this season he only has 21 plate appearances. Last year he only had 185. In fact, he has never had 300 plate appearances in any one season as a professional. Medina is only 24 but he is quickly coming to a point in his career where he needs to produce. If Medina can get on the playing field consistently, it will be much easier to evaluate his potential as a prospect.

By David Wood
Cantu has only 20 plate appearances so far this season due to injuries. In fact, he is currently rehabbing with the Arizona League Indians while on the injured list in Lake County. Cantu had a solid season in Mahoning Valley two years ago, however, last year he only batted .173 in 267 plate appearances while playing for Lake County. Cantu has not walked a lot nor does he steal bases. His value as a prospect is tied to his hitting ability. Right now Cantu needs to get healthy and then start producing consistently at the plate. Cleveland drafted Cantu in the 6th round so obviously they believe he has some potential. Hopefully Cantu can get healthy and show some of that potential.

Contreras swings at a pitch during a 2019 AZL Indians game. – Joseph Coblitz, BurningRiverBaseball

By Joseph Coblitz
Initially a third baseman, Contreras has been spending more and more time at first over the last couple seasons as his glove never caught up to the hot corner. He hasn’t been much better defensively at first this year and his bat isn’t developed enough yet to warrant tolerance of the poor glove. For the moment, he is backing up #3 on this list on the rookie level AZL Indians Blue, making him the third best Indians first baseman in Arizona. That isn’t a huge knock on Contreras, but doesn’t bode well for him either.

By Joseph Coblitz
Despite being in his fifth season with the Indians and having truly incredible power, De Oleo has only reached short season ball and could be on the short list for cuts in the near future. His strike out rate of 38% is a major detriment, but isn’t his only issue. He is a very poor defensive first baseman and, for some reason, was tried out at third where he has also been a poor defender. Possibly the biggest mark against De Oleo, however, could be his attitude. He was recently ejected from a game after he pushed the home plate umpire and attempted to hit the opposing pitcher with his helmet after striking out swinging.

Beyond his horrific batting line and poor defense, this type of behavior should be considered completely unacceptable and grounds for his release.

Bartlett stands at the plate during his rookie season with the AZL Indians Red. – Joseph Coblitz, BurningRiverBaseball

By Joseph Coblitz
Bartlett has had a bit of a rough start to his pro career, but there is definitely some potential there. He doesn’t have the glove of fellow 2019 pick Naranjo and he has struck out a lot in his first season, but he has shown bursts of power and I expect that to appear more often as he catches up to speed. It’s too early to judge long term, but Bartlett seems the most likely on this list to get stuck at DH other than De Oleo.

By Joseph Coblitz
Naranjo is one of the Indians newest players, joining after the 2019 draft, but he has already established himself as a patient hitter with a decent bat and good defense. He is a good overall athlete and, despite being a high school pick, has a fairly advanced approach at the plate. He is definitely one of the highest ceiling players on this list, although we’ll have to get a bit more of a sample size to accurately gauge his potential.

By Joseph Coblitz
The least first baseman like of all the first basemen on this list, Cooper has the body type of Triston McKenzie with great speed and a good glove. His great athleticism helps raise Cooper’s floor to make up for what he is missing (power, patience, etc) in ceiling. He has great bat speed and, if he can be a little more selective at the plate, could have some hidden power.

Considering that he was a 33rd round high school pick, any value at all that the Indians get out of Cooper would be huge and the fact that he is among the Indians top 1B prospects goes a long way to show both his ability and the overall weakness of the position within the franchise.

By Joseph Coblitz
From a power standpoint, Noel is not only the most impressive bat on this list, but stands with anyone else in the entire MiLB system. In addition, he is extremely athletic for a first baseman, providing great defense and surprisingly good speed on the bases. Noel has extreme power to all fields, with even his poor contact often reaching the outfield wall. He will regularly hit the ball to the opposite field early on in a game, then when the pitcher adjusts, unleash his true power by pulling the ball. Despite just turning 18, he already has 16 doubles and 14 home runs in his first 87 games.

The only thing keeping him this low on the list is the high potential for players to flame out after good starts in the low minors.

By David Wood
Reeves is the starting first baseman for the Lynchburg Hillcats in his third year in the Indians farm system. He is currently trending upward. He started the year in Lake County and has played his best baseball since being promoted to Lynchburg. In 30 games since his promotion he is slashing at a .320/.451/.464 pace. His walk to strikeout ratio is nearly one to one at 23:27. His 23 walks in 123 plate appearances pushes his walk rate to an impressive 18.7 percent. His combined slugging percentage between both minor league teams is only .424, however he already has 30 extra base hits so far. As he gains experience, improves his skills and confidence his power numbers should go up. Reeves, like so many in the Indians farm system, has not yet been tested at the AA or AAA levels. However he has shown an above average hit tool, that with some added power, may be enough to make him a legitimate prospect with major league potential.

By David Wood
Garcia is the starting first basemen for the Akron Rubber Ducks in his first year with the Indians organization. He was acquired in the off season during the minor league portion of the rule five draft from Baltimore. So far this season, Garcia is slashing .268/.310/.475. He has 23 doubles and 10 home runs. Garcia is a switch hitting first basemen coming off a season that he hit .293 with 23 HR and 76 RBI. He is only 25 years old and has had some injury issues this season. His future is up in the air right now. He has been fairly solid since coming over in the off season. If he can build on what he has done so far in AA he could be a viable major league option for Cleveland moving forward. How things shake out for Garcia will be determined by the quality of his play over the next year or two.