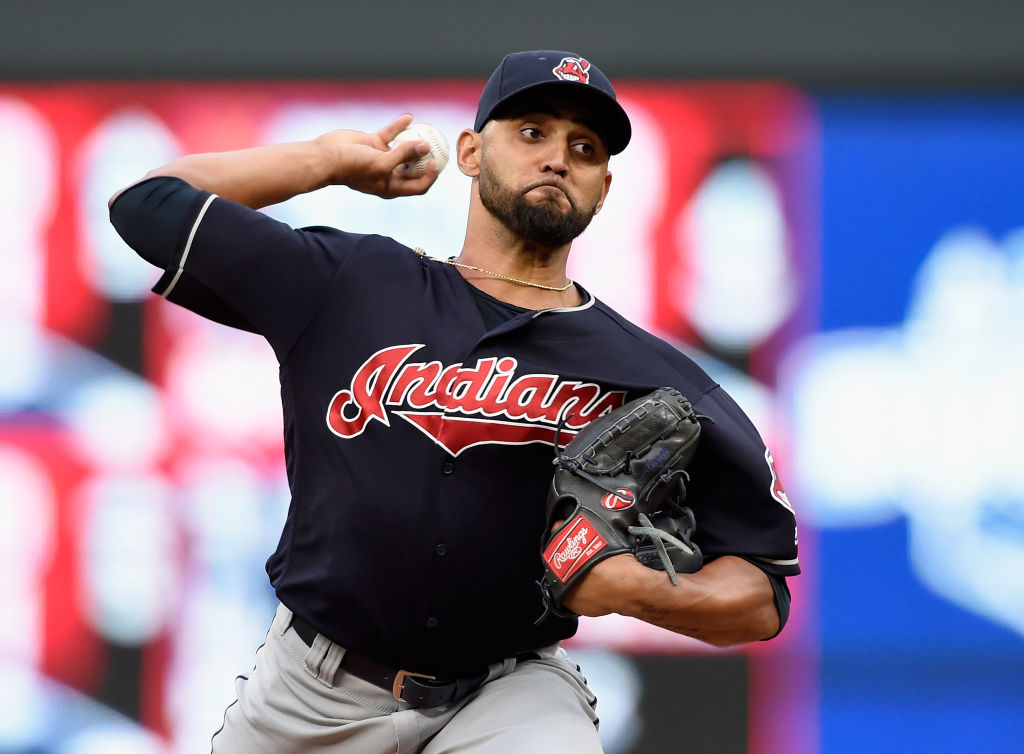 The Clippers hit the skids during their latest home stand, getting swept in a three-game series by Scranton Wilkes-Barre and then dropping two of three to Gwinnett over the weekend. The team starts this week off with a two-game series at Indianapolis before coming home to take on the Louisville Bats in a three-game series. The team heads to Indy with a seven-game lead over them in the International League West. Thanks to a lead they’ve build up over the first two-third of the season, this recent slide still leaves the Clippers in good shape to make the playoffs with a month to go in the season.

In the meantime, a familiar face turned up on the mound in Columbus, another young pitcher has taken command of the rotation, and as trade rumors swirl before the deadline on Wednesday, several prospects are making their case for a September call-up – whether it be with Cleveland or another team when the dust settles.

Danny Salazar Returns It’s been two years since Danny Salazar has donned a Cleveland Indians uniform and taken the ball for the Tribe. Rumors have been circulating most of the summer that he’s getting healthy. He was spotted in Arizona, and then Akron. Finally, he turned up in Columbus and pitched twice for the Clippers last week. Early returns are promising. On July 21 Salazar started the game against Buffalo. He pitched 3.1 innings, giving up three hits, striking out six, walking one and giving up no runs. He got the start again for the Clippers this past Sunday, and pitched four strong innings. He gave up one hit, struck out five, walked one and again gave up no runs. For those keeping count, that’s zero runs in 7.1 AAA innings for Salazar.

Observers have been quick to note that Salazar’s fastball is topping out at only 93 mph, which is far from the 97-99 mph heat he threw before undergoing multiple arm surgeries over the past few years. But once upon a time Salazar’s changeup was considered by many to be the best pitch in Major League Baseball. If Salazar can still throw that pitch for strikes to go along with a legitimate fastball, he could help the Indians as they make their late season playoff push.

It would be foolish to count on Salazar to contribute to the Indians, considering his track record over the past few years. But if healthy, he will join Cleveland in the next few weeks, as he’s out of options and cannot languish in the minor leagues. Such an addition would be a huge bonus for a team in the thick of a division race. Terry Francona indicated over the weekend that the Tribe has a plan for Salazar, but they are not yet ready to talk about it publicly. He said they may be able to reveal more on Tuesday after they talk to the guys who will be affected by said plan. Curiously, the trade deadline is Wednesday, so we will soon find out whether that timing is a coincidence.

Civale Continues to Roll After a successful spot start for the Indians a few weeks back, Aaron Civale has hit his stride for the Clippers. Aside from a hiccup against Scranton Wilkes-Barre last Thursday, Civale has been outstanding since his promotion from AA Akron in June. He is currently 3-1 with a 2.29 ERA for the Clippers over seven starts. Through 35.1 AAA IP, Civale has 42 strikeouts to nine walks, and has given up 33 hits. There are a lot of question marks surrounding the Indians’ rotation as we head into the last third of the season. Civale could be ripe for a September call-up so the Indians can get an extended look at him to figure out his role for the team going forward.

Ka’ai Tom is mashing in AAA Since getting the call-up from Akron, all CF Ka’ai Tom has done for the Clippers is hit. In 19 AAA games, Tom is now hitting .356, with 13 RBI’s and eight doubles. He has not shown a ton of power – only one HR in 73 at-bats – but he’s getting on-base at an alarming rate as his .405 on-base percentage demonstrates. Prior to this season Tom dealt with some injuries and a few underwhelming seasons in the Tribe’s system. But something has clicked for him this year, and it’s been exciting to watch him come on in Akron and now Columbus. With Oscar Mercado locking down CF in Cleveland for the foreseeable future, one has to wonder whether the Indians will look to Tom as a possible fourth OF or even a better option at one of the corner OF spots. Or, could the Indians use him as a trade chip to acquire help elsewhere? Either way he’s been a real spark plug for the Clippers since joining the team, and it’s great to see him find success this season.

Chang hits for the Desert Dogs against the Javelinas in Glendale during the 2018 season. – Joseph Coblitz, BurningRiverBaseball

Speaking of Trade Chips. . . Yu Chang‘s name keeps popping up as a player other teams have interest in heading into the trade deadline. Which leads one to wonder – especially with the Indians’ acquisition of IF Christian Arroyo from the Rays over the weekend – if Chang’s time with the Clippers could be coming to an end. After starting off poorly for Columbus this season before quickly heading to the IL, Chang has been on fire since returning healthy. The infielder is now hitting .274 on the season, with six HR, 31 RBI and ten doubles through 44 games. In his last ten games, Chang is slashing .316/.422/.526. If Chang is not traded before the deadline, he will likely be a September call-up for the Tribe, where the Tribe can get a look to see if he could be the heir apparent at second base to Jason Kipnis.

Karinchak pitches in relief for the Clippers during a 2019 MiLB spring training game. – Joseph Coblitz, BurningRiverBaseball

Karinchak Returns to Columbus – But for How Long? Bullpen wunderkind James Karinchak finally returned from the IL last week after a short rehab stint in Arizona. Karinchak seemed on the fast track to the Indians’ bullpen before going down with a hamstring injury in May. He’s back now, but how long he stays in Columbus depends on whether the Indians are ready to bring him to the major leagues. Over the weekend the Tribe traded for reliever Hunter Wood from the Rays. Whether this affects Karinchak’s timetable remains to be seen. If the Indians think Karinchak can help them get to October as they currently sit two games back of the Twins, then Wood’s arrival won’t affect Karinchak’s call-up.

Since returning to Columbus last week, Karinchak had one disaster of an outing against Scranton Wilkes-Barre, but followed it up on Sunday with a gem of an outing against Gwinnett. When healthy he’s been unhittable, so one bad outing after a two-and-a-half month stint on the IL should not be cause for concern. Karinchak looks like the perfect arm to set up Brad Hand in the eighth inning, and if I were a betting person I’d bet we see him sooner rather than later in Progressive Field.