What The Phillies See In Jason Vargas 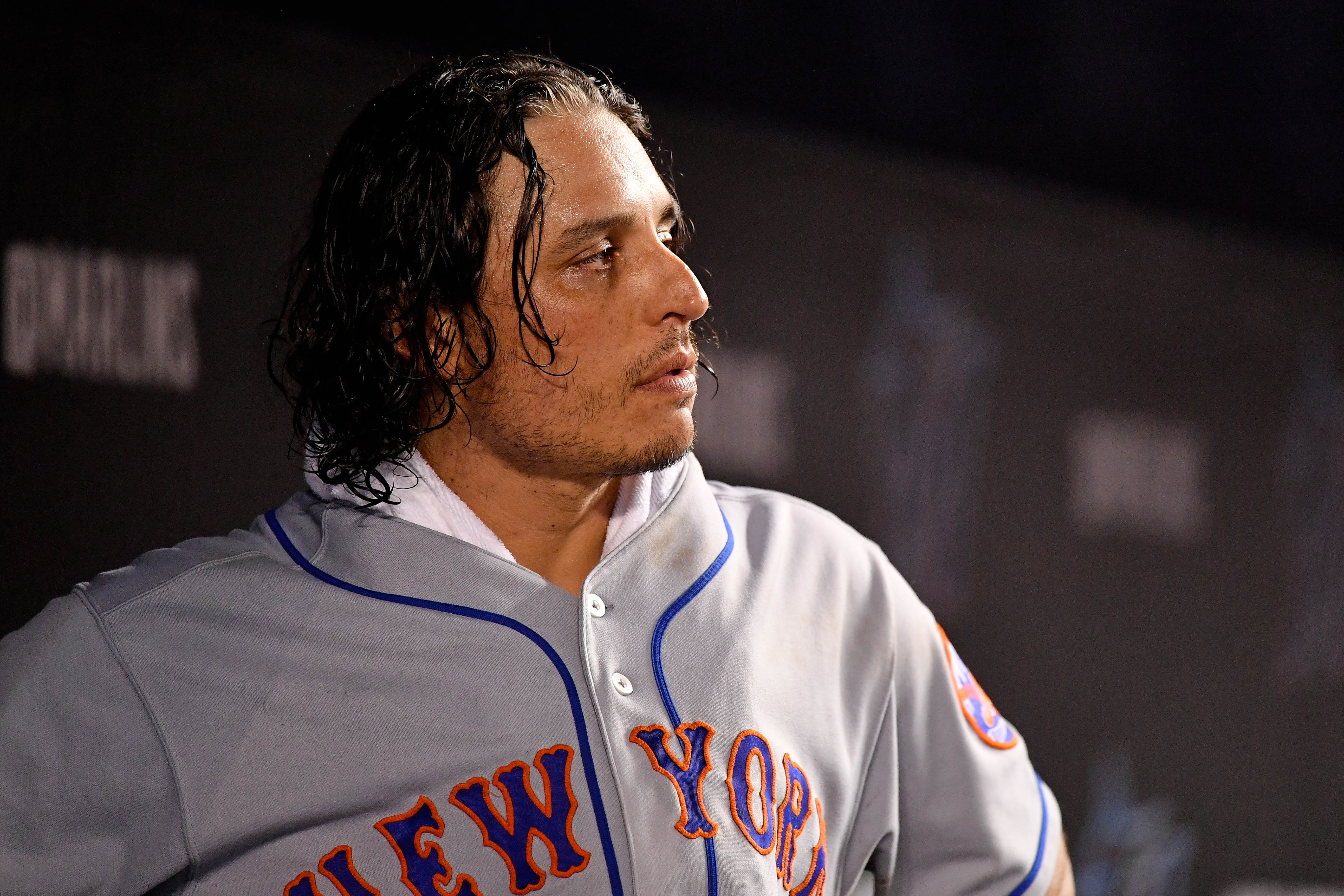 What The Phillies See In Jason Vargas

On Monday, the Phillies swung a deal with their division rival to acquire left-handed starting pitcher Jason Vargas in exchange for catcher Austin Bossart. It was clear that the Phillies would make at least one move for a starter in late July, and while Vargas has a low 4s ERA and a pitching style oddly resembling Jamie Moyer, this is possibly one of the least exciting moves they could have made. But this move doesn’t mean that is it for the deadline moves with Philadelphia. If last season’s deadline tells us anything, it’s that Klentak may not even see Vargas as a huge upgrade, he just thinks the move is worth it anyway as depth.

To understand how that is possible, you need to know about who they gave up. In terms of salary, the Mets are taking on some of it, leaving the Phillies with a small $2 million owed to Vargas. That will not bring them close to the luxury tax and allows them to make further moves. Bossart, the prospect, was likely only coveted by the Mets for his connection to the ownership. While he has shown some recent power, has a 91 wRC+ in AA with a very low BABIP, and has solid framing numbers, ultimately he is a 26-year-old in AA who is not doing very well or making any public prospect lists. The ceiling for him is arguably a cup-of-coffee in the MLB, but nothing more that could make the Phillies regret the move.

On paper, Vargas is a minimal upgrade over anybody in the Phillies rotation. He posted a 4.71 FIP, 5.22 xFIP, 5.09 SIERA, and 4.81 DRA in 18 starts so far this season. And none of these are huge drop-offs from previous years, outside of expected aging. His Steamer projection the rest of the way is a 4.98 ERA, the same as Zach Eflin’s but worse than everybody else in the rotation.

With such a low cost, there is at least some possibility that the Phillies agree with the basic numbers and projections, that Vargas is not an immediate upgrade over any one of the five currently in the pitching staff. In fact, they have admitted to not knowing who he will slide in for yet already. But immediate upgrades were not the only need the Phillies actually had coming into late July. An emergency starter also helps. Outside of Aaron Nola, all four starters have a lot of risk to them. Jake Arrieta and Eflin’s bodies could fail them by September, if they haven’t already, Drew Smyly was DFA’d earlier this season and has only made one start since, and Vince Velasquez has had an up-and-down career, at one point falling out of the rotation and into the bullpen. While the Phillies could look for more pitching on Wednesday morning, if at one point the prospect cost gets out of Klentak’s comfort zone, they could lose out on more arms than they wanted.

While they will still look for other pitchers and may still believe in some of the arms in their rotation, it is possible that by the end of August that does not hold up. If they need to put somebody on the IL or option them to AAA, Vargas is then the better option than the current replacement options. He fits the part too. Vargas is a 36-year-old veteran that Klentak is familiar with. He has playoff experience, his numbers don’t fall off a cliff too much the third time through the order, his salary is not very meaningful. His PECOTA projections paint how much of a known product he is as well, as is 10th percentile projection is an ERA of 5.06, really painting that he has a high floor, even if not that high of a ceiling.

While he does fit in that role nicely, there are still some concerns about Vargas when it comes to whether or not he is the best player for that role. He does have an extensive injury history, including a Tommy John surgery a few seasons back. With consistently diminishing fastball velocity, you have to wonder whether is body is truly holding up well, and if it is not, you may need a back-up option for the back-up. Also, even though he has shown the ability to be effective the third time through, over the past two seasons, Vargas is averaging less than 5 IP per appearance. So he will not exactly be eating innings. Additionally, even though Matt Klentak said they did their research, and it is hard for fans to truly judge somebody’s clubhouse presence, there are still concerns about his threat to fight a reporter, as well as getting into arguments with umpires that make you question how he will fit.

So what if the Phillies are not looking at Vargas as an emergency fill-in, but rather as a legitimate upgrade. While immediately he does not look like one, what could Philadelphia see in the lefty? While he’s not great at getting strikeouts or preventing walks, he has done a decent job of controlling contact. His home runs allowed numbers are worse than league average, and so is his Barrel%, but outside of that he might defy the odds at controlling contact. Although the general rule of thumb is that hard-hit rates for pitchers are unreliable at predicting, he is in the 72nd percentile for that metric, as well as 86th for average exit velocity against. This has led to an xwOBA against of .310, slightly better than league average. Over 59% of ground balls against Vargas have been pulled in each of the last 4 seasons, and only 3 other starters have a higher mark this season. Since pulled grounders typically are outs a higher percentage of the time than opposite-field grounders, the fact that Vargas can consistently produce them (as well as pop-ups) explains why his career BABIP against is .284.

So maybe the Phillies believe in his ability to produce weak contact and think his ERA will continue to be 0.4 better than his xFIP as it has been over his entire career. Maybe they are also interested in what they can do to the location of his fastball. Vargas is seemingly one of the last pitchers to buy into the high heat revolution. While it is understandable, he is a low-slot pitcher with the slowest fastball in the game, there are still benefits. Only 25.3% of his fastballs have been in the upper third of the zone or higher. Compare that to Jerad Eickhoff, another Phillies pitcher with a slower fastball and a good changeup/curve combination, who threw his fastball in those areas 50.2% of the time, and you could easily see the Phillies pushing this new approach to Vargas. That should help, as he has gotten more whiffs on his fastball when up in the zone over his career, and that even spans to before the launch angle revolution, which has left batters even more susceptible to those pitches.

Another interesting note about Vargas this past season is how his pitch usage has changed throughout the year. He has progressively used his sinker less often and his changeup more. In the past 5 games, Vargas’ changeup usage has been nearly 40%, with his sinker being used just over 10% of the time. In past seasons, his sinker was actually used more overall. This seems like it makes sense, as Vargas has one of the best changeups in the game with a 1.5 pVAL/100 pitches over his career and 1.1 this year, compared to -0.8 and -1.9 for his sinker.

The question is if having that high of a usage rate on a changeup is sustainable. In 2019, no qualified starter has thrown a changeup 40% of the time or more, and the closest, Trevor Richards, was just moved to the bullpen. If Vargas were to have a season with 40% of his pitches being changeups, it would be the most seen in recent seasons. So there is a risk if the Phillies plan to keep that strategy up. However, it has worked so far. As of recently, Vargas’ xwOBA against has dipped to the lowest that he’s had since Statcast was implemented across the league.

If Klentak and the Phillies think Vargas has a legitimate shot at keeping his ERA in the low 4’s thanks to an adjusted pitch mix, possibly more high fastballs, and his ability to limit good contact, then this trade is easy to make. Even if he does not come off as someone you would want pitching in the playoffs, he is a cheap upgrade over most of the rotation. Maybe they don’t actually believe he could be that good over the 2nd half of the season, like most people. Even if that is true, Vargas could play a role to eat innings before the team has to rely on Cole Irvin or Enyel De Los Santos. This move doesn’t mean they can’t swing a deal for somebody else, but it takes the stress off just a little bit.