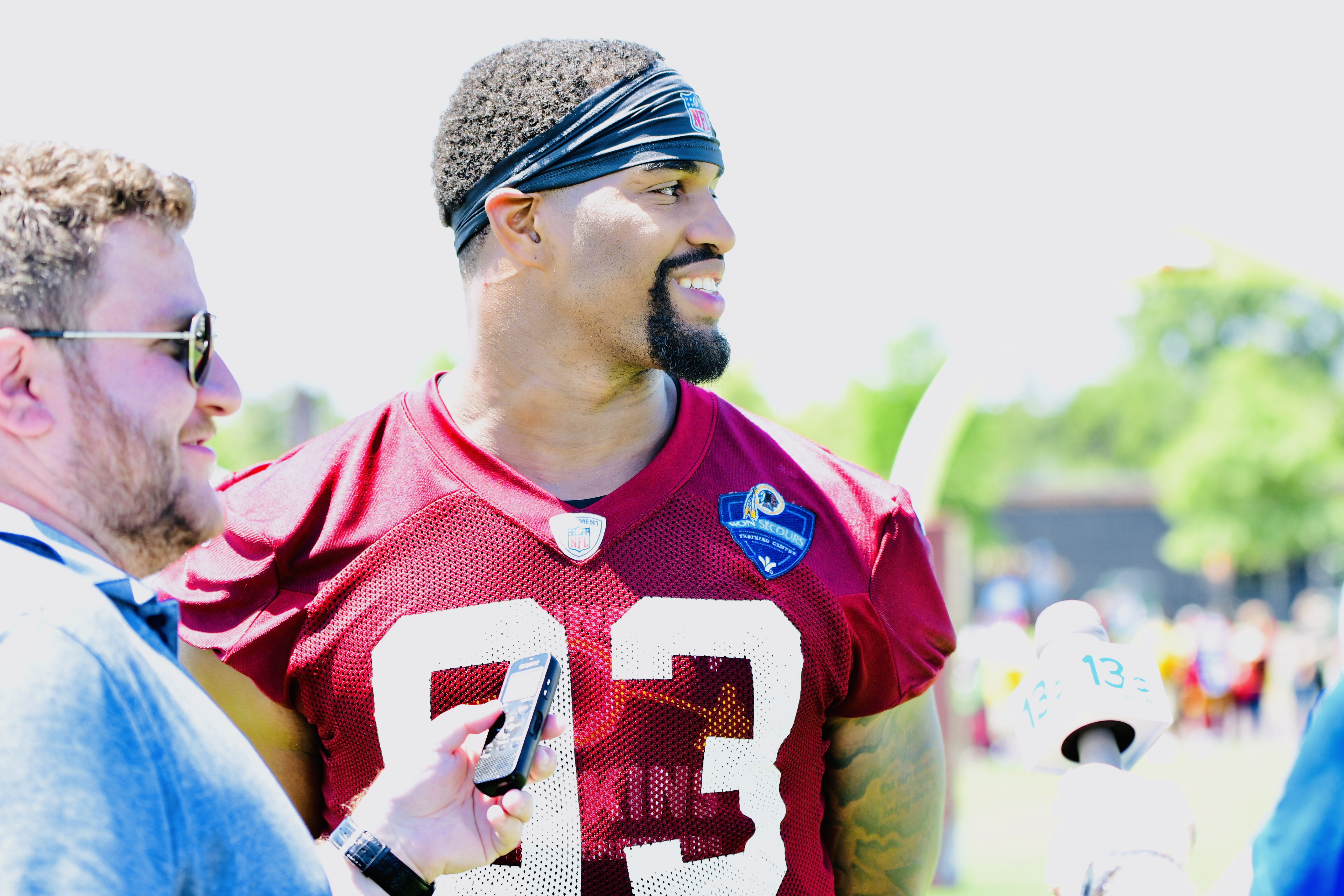 On the development of the rookie class:

“I’ve been very impressed with how developed they are. Usually when rookies come in and they’re not that developmentally sound, so that just shows a testament to their college and where they came from and how they’ve been coached up to this point, because they’re coming in and they hit the ground with their feet running. I am very impressed with that. Not to mention, they are very physical. Obviously, if I didn’t know any better I wouldn’t know they’re rookies.”

On the possibility of being named team captain:

On self-assessment going in to Year 3:

“I wouldn’t say I’m like a wily vet. I definitely feel confident. When you go into your third year you pretty much have an understanding of the playbook and that’s where you can expand your understanding to the DB, the linebackers; you really get a feel for the whole scheme. Really going into your third year, for me personally, since I know the plays, I can focus on just playing faster, more aggressive, more confident. Camp has been going good. I feel healthy and I’m ready to play some ball.”

“It’s been good so far. I mean, you never really know until you get into that true home game because that’s when the crowd is really a big factor. The crowd is not a factor right now. So, for the most part up until this point, the communications been great, but, it’s what day five day five of camp, day six of camp, so we’re definitely nowhere near where we need to be. We’re not worried about anything except this practice. So, I have go back and look at the film, see how we did, but from the field, from what I can see, it looked like we did a pretty okay job of it.”

On correcting mistakes as unit following the last practice:

On what he did on the off day:

“So, actually, I didn’t play games. I slept until about noon, then I woke up, squatted heavy, worked out, came back, slept until dinner, ate some dinner, slept more, get ready for practice.”

On video games as an offseason activity:

“One hundred percent, it’s where I get my fix. I always got to be competing no matter what it is. If it’s not competitive or not something I can compete in, then I don’t really find it enjoyable.”

On if the amount of work is benefiting the defensive line:

“One hundred percent, as a defensive line, it doesn’t really matter who we go against. Obviously, Trent’s (Williams) not here, some of the starters aren’t here, they’re rotating a lot, but at the same time, it’s about what we do. I genuinely feel that. Going back to college, Coach Saban (Alabama Head Football Coach, Nick Saban) used to always say, ‘It’s not about the other team, it’s about what we do,’ to me it doesn’t matter who I line up against. I’m going to try to the same thing, play with the same aggression, same physicality, and I’m going to get my work in regardless.”

On the overall vibe of practices during camp:

“It’s camp. It wouldn’t be camp if we didn’t have some fights; I know people might not like to hear it but its football, it’s physical, and it’s a nasty game. There’s nothing nice about whooping someone’s [tail]. I mean, it is what it is – its football.

“He wouldn’t. He’s a quarterback. I don’t get what he does; he doesn’t get what I do. We’re in two different worlds here.”

On T Morgan Moses’ comments regarding the high levels of excitement surrounding the team:

“I just feel like we have a bunch of guys who just want to win. I was a Redskins fan before I was a Redskins player and the last time we won was [with] RGIII (Robert Griffin III) and that’s the last time we’ve been in the playoffs. I think; I’m not even sure. What’s that, six years ago, seven years ago? So that sucks. [That’s really disappointing]. We’re just trying to win. Honestly, if it’s not about that, there’s really no point. I’m not talking about it. We’re all just trying to win. We’re desperate to win and honestly, if we don’t win, it doesn’t really matter about stats. Personally, I don’t even care about that.”