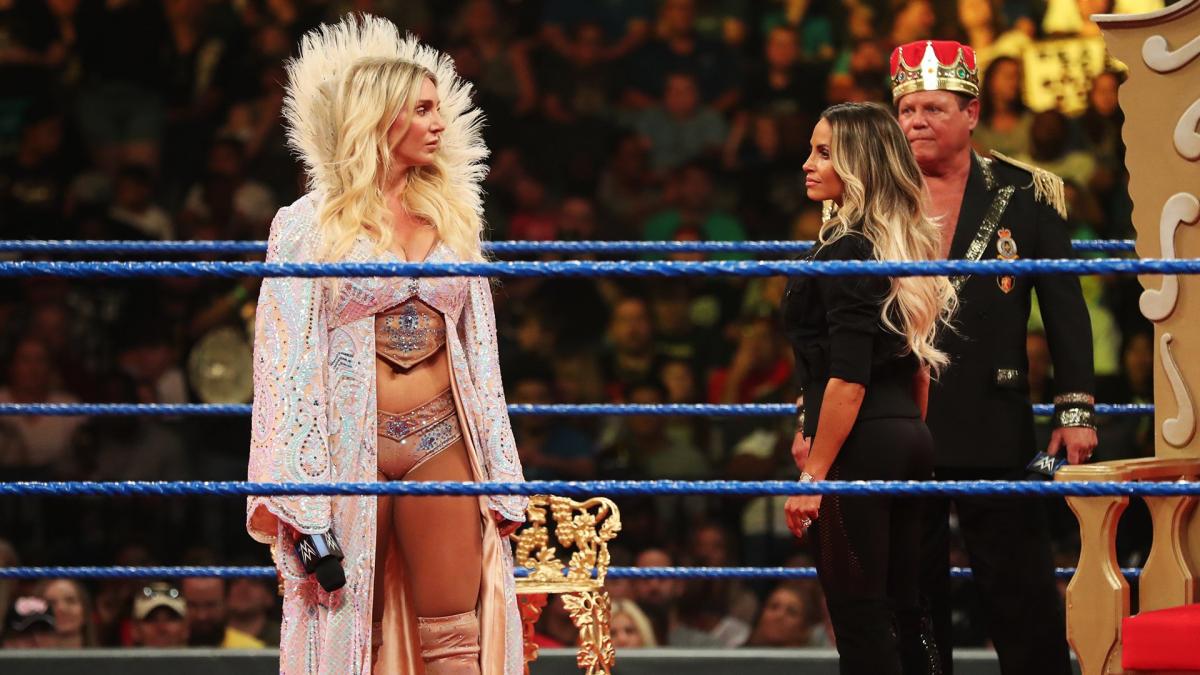 When news broke of a match possibly happening between WWE Hall of Famer Trish Stratus and Charlotte Flair, many fans were caught off guard. With less than two weeks to build on anything en route to SummerSlam, one would think that the decision is rather perplexing.

Fear not, there is more than meets the eye when it comes to this dream match. While everyone saw the confrontation coming during the King’s Court segment on Smackdown Live this past Tuesday, the facts have been laid down. When it comes to Flair and Stratus, their accomplishments are parallel to their respective eras and it goes beyond that.

Prior to Flair obtaining the record for the most Women’s Championship reigns, Stratus was the one who held that record. Stratus captured an unprecedented seventh Championship reign during her retirement match at Unforgiven in 2006. Ironically, Stratus retired in Toronto, in the same arena that SummerSlam is taking place.

In the four years since her main roster debut, Flair has championed her way into the history books. Her accomplishments have little to do with her name, but through much hard work. Her feuds with Sasha Banks and Becky Lynch are among the more recent great feuds. Her NXT Takeover match with Natalya five years ago is still held in high regard.

Flair has added so many firsts to her resume, with Hell in a Cell and Last Woman Standing matches (versus Banks and Lynch respectively). Furthermore, Flair was the “Chosen One” that was added to the first ever Women’s main event at WrestleMania 35.

While Flair has certainly added to the family legacy, Stratus is held in high honors as one of the trailblazers for what is now the Women’s Evolution. Stratus broke the glass ceiling with her historic feud with Lita, leading into the first Women’s main event match on Raw in 2004.

In addition, Stratus was one of WWE’s most popular, if not the most popular, Divas during her time. She was a huge fan favorite, being one of the more predominant faces that appeared on WWE programming.

Simply put, if it wasn’t for Trish Stratus, Charlotte Flair wouldn’t have had the chance of enjoying the successes that has been bestowed upon her. Stratus was quick to point that out during the confrontation with Flair.

Yes, time is of the essence, but with two women who are so accomplished in WWE, it may just be enough to build for this special attraction match. With SummerSlam being in Toronto, the home of Stratus, the match adds that much more allure for fans.

Now that the stage is set, the match must deliver.  It is certain that Flair will get a dose of Stratusfaction, however it is a classic babyface versus the current villainess. It always works, and with Flair not in any current storyline perhaps there wasn’t any greater opportunity than now to have her challenge Stratus.

Perhaps this can go either way, Stratus putting Flair in her place by proving she has what it takes in this new era. Or Flair earns a win along with Stratus’ respect. On second thought, that actually sounds much better than Flair being in yet another Championship match. Flair is currently past that avenue, so it was a matter of going another step above the competition after all.