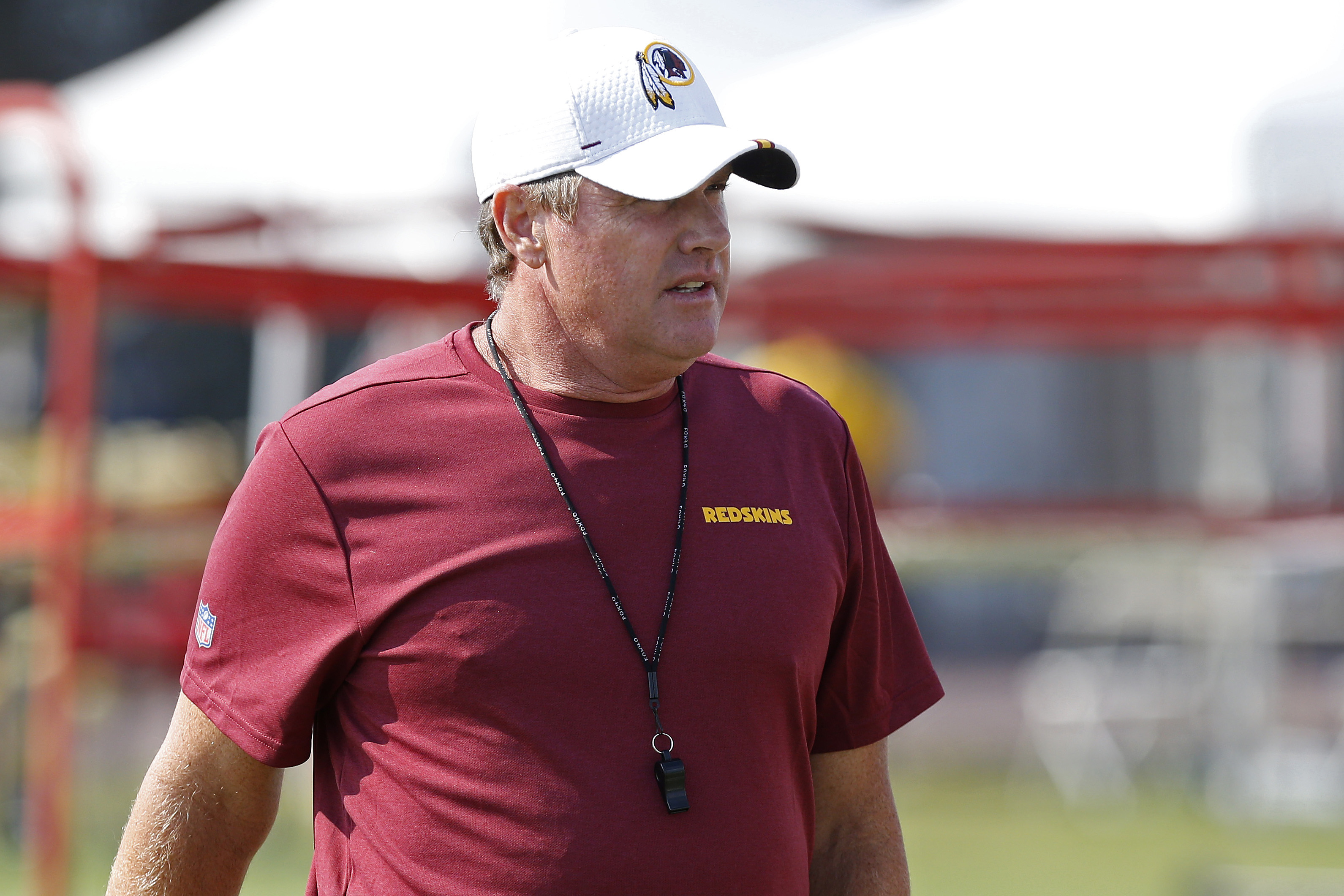 On his response to the fights yesterday:

“Well there’s no place for fighting – number one it’s a personal foul, you get ejected from games, lack of discipline – I had to squash it, so we squashed it.”

On if there are any positives that come from fights during training camp:

“I like competition – always have, always will. I like effort. Extracurricular fighting? There’s no positive, at all.”

“Yes. The big thing for Colt is to make sure he is back physically. Colt has a great grasp on the offense and really made some really nice throws – done some good things. Colt is right there.”

“Safeties? Obviously, Landon [Collins] is everything and more that we thought so far. Both in the box, and in the post and out on the hash. He’s very versatile in what he can do in coverage. He’s been very good. He’s been outstanding. I think Montae [Nicholson] is getting more and more confidence in what he’s doing for a younger player. He missed a little bit of time last year, but he’s running around. [Troy] Apke coming back from his hamstring injury – he missed a lot of time last year he’s showing flashes of being very good. Special teams he’s excellent. [Jeremy] Reaves is doing a good job. [Deshazor] Everett, I think, is starting to really grasp the defense and he’s being very versatile as well. He can play in the box. We can do different things with him down on the line of scrimmage, so I’m very pleased with the safeties so far.”

“He got kicked. He got leg-whipped. He got kicked in the calf, so we’ll probably keep him out today but he’ll be fine. He should be back hopefully when we come back from the day off.”

“Wes? Well he’s a smart kid, for sure – hard worker, strong, really, really, really strong. Obviously, as a guard you have to have some strength because those big guys inside with Jonathan [Allen] and [Daron] Payne and Fletcher Cox and those guys we face you’ve got to have some strength. I think what we’ve learned a little bit, he’s a lot more athletic than we thought. He can pull; he’s pulling very well. As a character, we knew he was a grade A character. There’s no issue there. Now it’s just a matter of getting him acclimated to the speed of the game, the stunts, the movement, how to adjust to certain blocking schemes to different fonts and looks. He’s been very good so far.”

“Cole Holcomb is – he’s been excellent. I think he works extremely hard mentally, which is important for a linebacker. He studies film, he’s the first one up watching tape [at] 6 AM. I’m getting a coffee and he’s there watching his iPad. He’s a very hard worker, wants to be great. He has the tools to be great because he’s got power, he’s got speed, he’s got instincts. He’s got everything you need for a linebacker to have as far as a skillset. Now, it’s just a matter of communication, seeing things and adjusting to different looks. But, I’ve been very impressed with Cole.”

On the quarterback competition:

“Yeah, you know, you can never have too many reps, but with more reps comes more work for other guys and more running for the receivers – you wear them down and the corners and the safeties and the linebackers and the defensive line, offensive line. So, we’ve had to – I’ve chopped down practice a little bit today; we’ll give them a day off tomorrow and then come back and we’ll meet as a staff on our day off and reevaluate the situation as far as reps are concerned with the quarterbacks. But so far, I think it’s how we wanted it to be. We’ve given them all an equal shot – lots of reps and they are probably right around equal right now.”

On what he hopes to see in the next portion of training camp:

“Just continued competition and to continue to get better; that’s all we can do. Continue to teach our system, teach our fundamentals and try to find the best players. The only way we can do that is practice. We’ll have some padded practices, may have a live session before the game, but then once the game starts I want to make sure these guys know what to so they can go out and play and show us what they have. Nothing worse than having a great, athletic player not knowing what to do. So we need to make sure these guys are schooled and they’re doing the right thing so they can play fast and show us exactly what they have on game day.”

On the RB position group with Peterson, Guice, and Thompson:

“Yeah, you can’t disregard Samaje Perine, he’s been outstanding, even catching the ball, protection he’s been great, strong he’s been great. Those guys have been very good. Craig Reynolds has done a good job, Byron Marshall’s showing flashes still. I think the running back room is pretty solid. We added Shaun [Wilson] he’s showing flashes of speed and able to catch the ball, so it’s a deep room and it’s going to be some tough decisions in that room, that’s for sure.”

“Hugh [Thornton] did okay. Hugh’s got good feet, he can move a little bit, so it’s good to see him and get him out there and get him back in the game a little bit. Donald [Penn] came out there and Donald is Donald, he’s a very experienced guy – seen a lot of different looks and pass blocked a lot of good players in his day, so he’ll be fine.”

On encouraging competitive instincts but limiting fights during training camp:

“That was after one-on-ones, that had nothing really to do with competitiveness, that was more of talking. I’m not a big fan of talkers. Not Jonathan [Allen] in general, but overall I think both groups were talking a little bit too much and then tempers go flared. But Johnathan, [Daron] Payne, [Tim] Settle, [Matt] Ioannidis, [Caleb] Brantley, JoJo [Wicker], those guys are a force to be reckoned with. They’re doing very good on the defensive line. They’re giving us good looks pressing the pockets and then our edge rushers are doing a good job of getting the edge. It’s a good group and it’s making us better on offense. Hopefully our offensive line is making them better. That’s what this is all about. We’ve got to compete and we got to handle different looks and good people. This should make us better in the long run, but the fighting and the talking, that doesn’t help at all.”