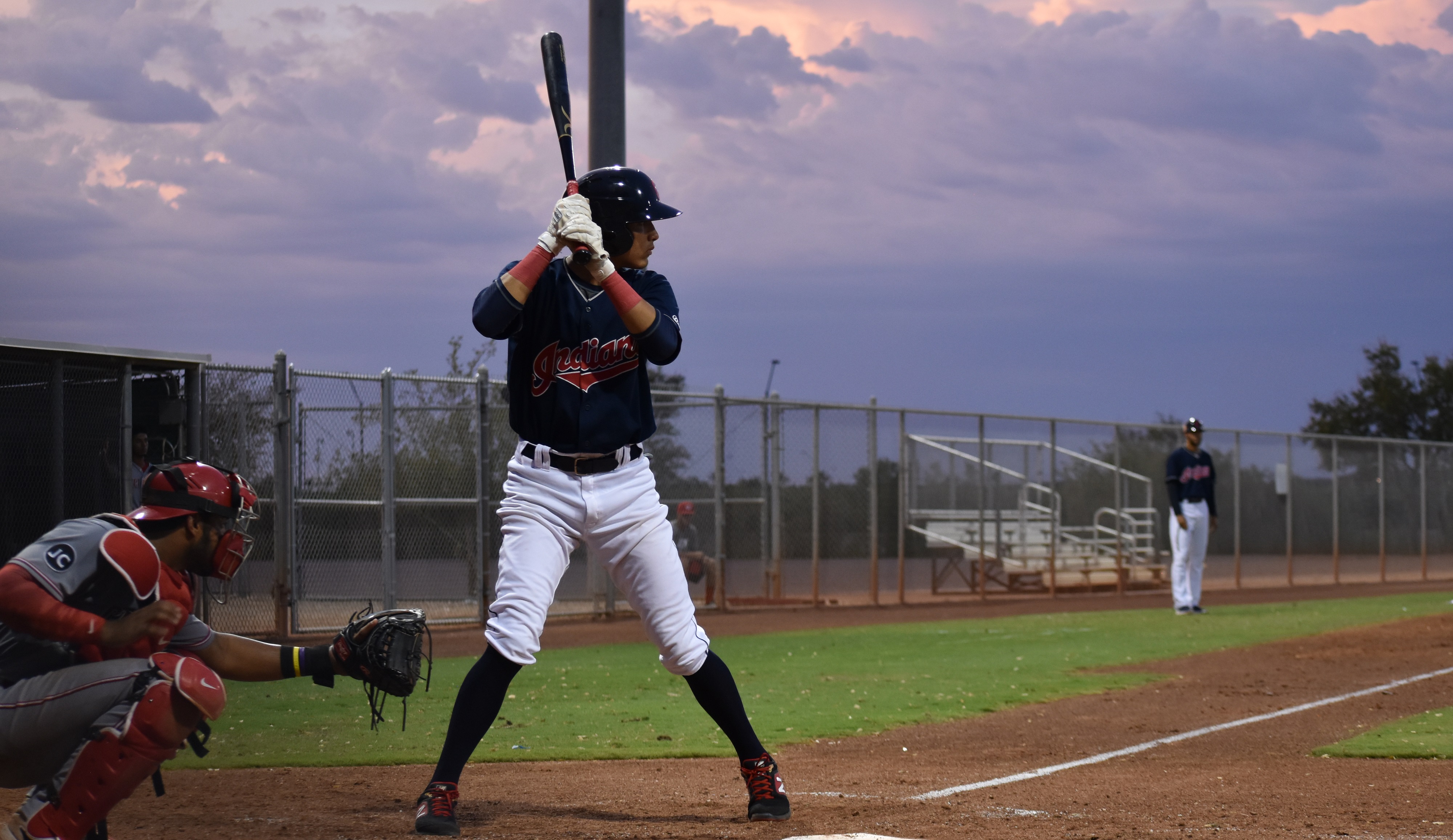 The AZL Indians all survived the trade deadline, something that used to be common, but hasn’t been the last two years, but that doesn’t mean that no changes were made to the AZL Indians Red. In addition to the Arizona Leaguer who was obtained in the Trevor Bauer trade that hasn’t been added yet, team Red has called up Gabriel Rodriguez and Adenys Bautista from the Dominican Summer League Indians. In addition, with multiple players promoted from team Blue to Mahoning Valley, Jothson Flores and Gaspar Palacio have been moved from Red to Blue.

On Sunday night, Yeffersson Yannuzzi made a start on rehab assignment and struggled with command, walking four and allowing two runs despite not giving up a hit in 2.1 innings. The lefty who was the ace of Indians Blue in 2018 now has nine walks, a hit batter and five strike outs after being great as a control pitcher last year.

This particular game, however, was rough overall with walks as the Indians staff put 12 on for free with the normally dominant Kevin Coulter putting on three himself in the final three innings of the game. At the same time, the Brewers Gold struck out 13 with just two walks. Will Bartlett was the top offensive performer for Red after coming in for the rehabbing Micael Ramirez. He had two hits in three at bats with a triple.

Continuing on with his own rehab assignment, Andrew Velazquez continued to tear apart AZL pitchers with three hits on Monday, two of which were doubles. After another two hits on Wednesday night, he was hitting .517/.567/.931 through nine AZL games. Normally a AAA player with a little MLB experience, Velazquez was returned to Columbus on August 1st.

The recently promoted Richard Paz also had a solid offensive game on Monday with two hits including his first AZL double. It is an odd quirk, but so far he has two hits in each of his games against San Diego based teams, but does not have another hit in the other three.

On the mound, Daniel Espino started and went two innings without allowing a run, then Miguel Vinicio piggy backed the start with five shut out, one hit inning. He struck out six in this appearance, walking just one. This is Vinicio’s second appearance of five shut out innings this year, but he has struggled greatly in between.

Wednesday night was a huge game for Indians Red as they took on Brewers Blue. Francisco Perez started and went three perfect innings with four strike outs. This was a significant improvement over his first rehab start last week. In addition to Velazquez’s two hits, Gabriel Rodriguez made his AZL debut with three hits and an RBI in four at bats. Rodriguez is just 17, but had 14 extra base hits in 38 DSL games, slugging .406. He played well in extended spring training where he was primarily a short stop. He stayed at the position for the most part in the DSL, but played his first game in Arizona at third base.

A three base error on Friday night against the Reds to start the game ultimately cost the Indians four runs and the ballgame. Beyond that, the pitching staff performed admirably with Braunny Munoz getting the start and going five innings with only the four unearned runs scoring. He struck out four and walked one. Luis Jimenez was particularly solid in relief, striking out four in two perfect innings.

Jimenez pitches in relief on the road against the Reds during the 2019 AZL Indians Red season. – Joseph Coblitz, BurningRiverBaseball

Of course, the Reds were even better, allowing just one run all game thanks to six shut out innings and nine strike outs by Spencer Stockton. With a 2.36 ERA and 36 strike outs to three walks, Stockton has been one of the top pitchers in the AZL this season and the top pitcher on the Reds.

Team Red wrapped up the week with another game against the Reds on Friday night. Juan Zapata started and pitched through four hits without allowing a run through four innings (5 K’s). Coulter continued his tremendous start with two more strike outs in two perfect innings and Jacob Forrester struck out all three batters he faced in a perfect inning.

Offensively, Dillon Persinger lead the way while on a rehab assignment with two hits and a walk in three plate appearances. He also knocked in two runs including one on the RBI single shown below. Jean Montero scored on the play as he was attempting to steal third.

In the end, however, it was an error by Montero in center that allowed the game winning run to score in the 9th in a 5-4 game.