Your Morning Dump... Where we get to "give thanks" for Kyrie Irving on November 27th 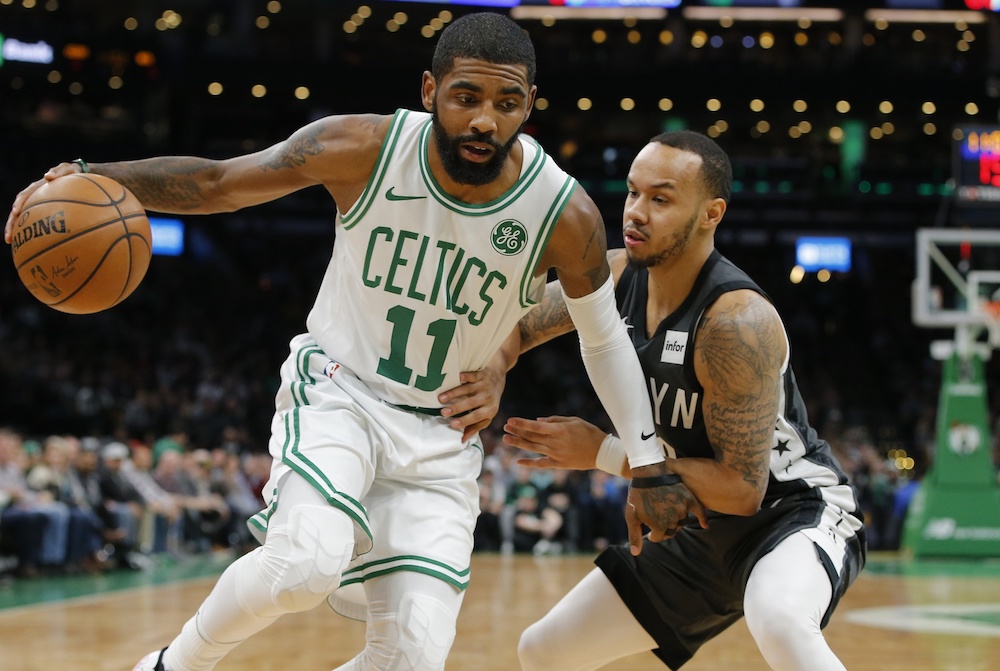 Your Morning Dump... Where we get to "give thanks" for Kyrie Irving on November 27th

Mark your calendars, folks. We know when Kyrie Irving (in theory) will return to Boston.

The Brooklyn Nets’ first road game against the Celtics will be on Nov. 27, The Athletic’s Shams Charania reported Friday.

The NBA has begun to leak the dates of some of its juiciest match-ups and marquee days/nights of the year (including Christmas Day, which includes the Celtics up north to take on the Raptors. I’d put good money on that being the first game of the day at ~12pm) including many of its reunion games: Anthony Davis in New Orleans, Mike Conley in Memphis and Kyrie Irving in Boston.

A little over a month into the season, and the night before Thanksgiving is when the Nets visit TD Garden, but can we really be sure Kyrie will show? He missed 3 out of 4 games in Cleveland as a member of the Celtics, but I think part of that may have been because the Cavs, at least this year, were a basement dweller in the standings. Irving took plenty of nights off for load management against bad competition. The Celtics and Nets project to be in the top six or so in the east, so would he really not play?

I’ve been saying it since he was rumored to be leaving, instead of a tribute video, the Celtics should play his Nike commercial in its entirety.

On page 2, do the Celtics have enough 3-point shooting?

Heading into the 2019-20 season, the Celtics are primed to be a better team on offense than defense, at least on paper. The front office brought aboard an All-Star creator in Kemba Walker to replace a departing Kyrie Irving and added an efficient Enes Kanter to help replace Al Horford’s offensive output (although not from the perimeter). With defensive anchors like Horford and Aron Baynes out the door and unproven/subpar replacements at the center spot, the general thinking is that this group is going to have to win games based on the strength of their offense most nights.

However, a recent graphic from John Schuhmann of NBA.com pointed out a surprising statistic on that front. When accounting for turnover across the league in 3-point shooting, the Celtics actually only have three players currently on the roster that shot above-average from 3-point range last year (35.5 percent) and took 100 attempts. That puts them in a tie for 19th in the league in that department.

As long as one big (Kanter/Theis/G Williams) turns into a respected threat from beyond the arc, defenses are going to be stretched thin against Boston. There are going to be plenty of question marks in other parts of the roster with seldom-used (Wanamaker) players and the rookies (Edwards/Langford) but as long as Hayward/Brown/Smart have to be guarded closely at the arc, there should be plenty of room for Walker to operate. That’s something he hasn’t had throughout his career and should allow him to reach a higher level on the offensive end.

Boston Sports Journal — Summer Questions: Will 3-point shooting be a concern for Celtics next season?

As the Celtics were linked to shooters in the draft like Tyler Herro, and as the Kyle Korvers, JJ Redicks and Reggie Bullocks of the world all hit free agency, I remember wondering when the last time was that the Cs truly employed a three-point specialist on the roster. James Young? RJ Hunter? The Celtics instead take a lot of guys who they think can grow into reliable three point shooters (Jaylen Brown, Marcus Smart, Terry Rozier, Romeo Langford) once they get them into the program.

I think Carsen Edwards could be the the next Celtic, and the first in a while, to draw multiple defenders when he comes around a screen off the ball as a three-point threat. But as Brian Robb points out, it’ll be more than just getting one guy to be seen as a marksman on the roster, the team is going to need progression from beyond the arc from Jaylen, Marcus and Tatum, and a bounce back shooting year from Gordon Hayward. If not, the Celtics might be a middle three-point shooting team, and it’ll cause folks to wonder why Danny Ainge has eschewed employing a bombs-away player on the roster.