Houston Astros have a clear plan for Aaron Sanchez 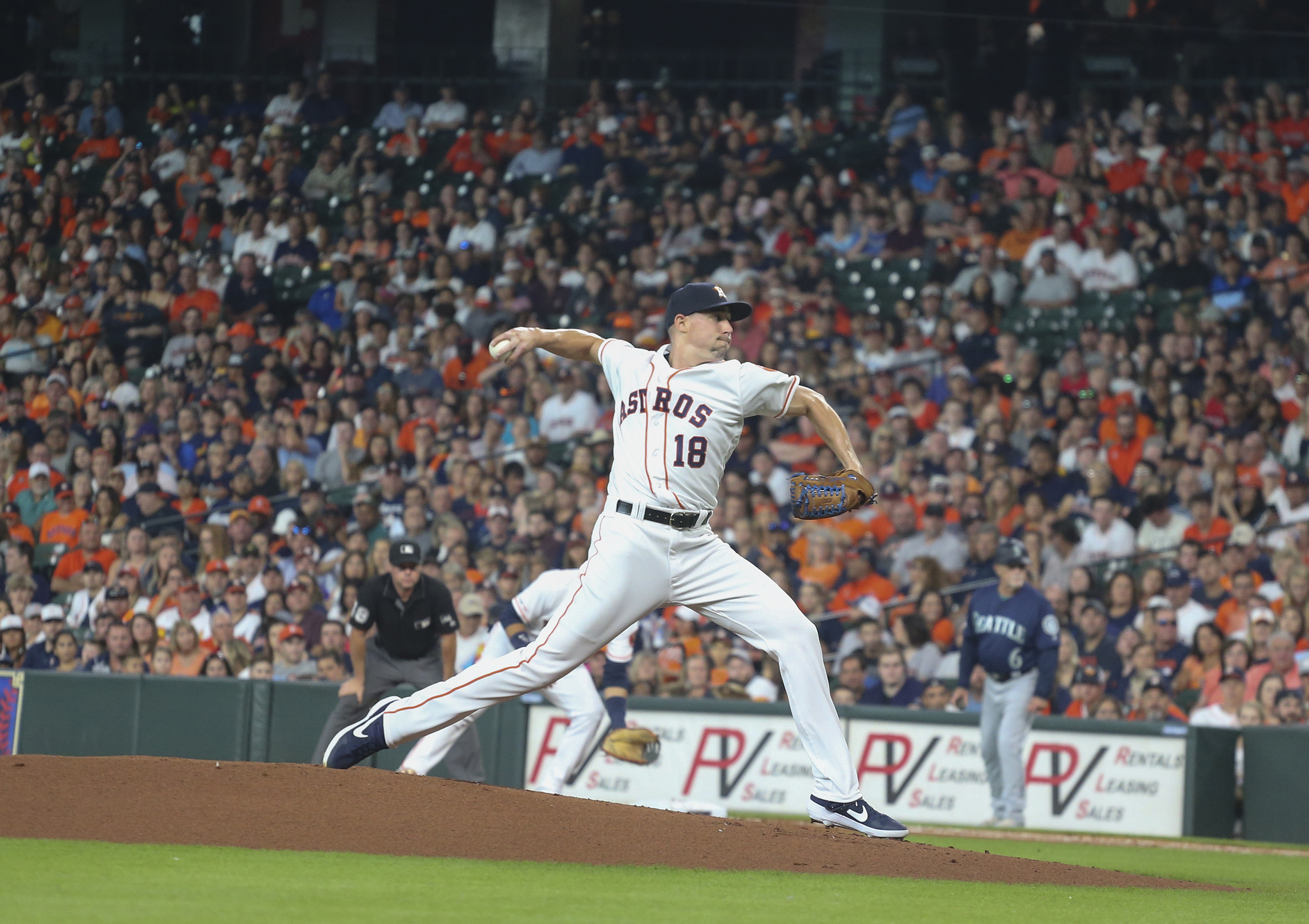 Houston Astros have a clear plan for Aaron Sanchez

Prior to the MLB trade deadline passing on July 31st, the Houston Astros loaded up for another deep October run. While acquiring both Aaron Sanchez and Joe Biagini from the Toronto Blue Jays was necessary for the pitching staff, also bringing Zack Greinke into the fold is what caught everyone’s attention.

Greinke isn’t making his Astros debut until Tuesday, but Sanchez already made his mark in his first start with the organization on Saturday. Facing the Seattle Mariners, the 27-year-old right-hander twirled six scoreless innings, allowing no hits, two walks, and six strikeouts. Outside of leaving with a no-hitter intact, Sanchez’s appearance was notable from another respect:

In his @astros debut, Aaron Sanchez threw 6.0 innings without allowing a hit before being removed from the game.

He's the 1st pitcher to throw 6.0+ innings and not allow a hit in his debut with a team after a midseason trade since Greg Maddux did so for the Dodgers on 8/3/2006.

And then, you know, the Astros actually finished the job by keeping the Mariners hitless for the final three frames, producing this interesting factoid:

The @astros are the second team in MLB history to throw a combined no-hitter in a pitcher's first start with a team (Aaron Sanchez was making his Astros debut today).

The other came on 4/11/1990 in Mark Langston's first start with the Angels.#TakeItBack

Sanchez’s performance with Toronto this season made what he just did that much more eye-opening, though. While he posted a 2.32 ERA through his first 31 innings in 2019, his peripherals had him as one of our worst pitchers through the end of April. Eventually, regression hit him in a big way — before getting dealt last week, he produced a 6.07 ERA and 5.25 SIERA with an 18.9% strikeout rate and 11.3% walk rate in 112.2 innings pitched.

Of course, it wouldn’t be fair to draw any real conclusions after six innings with his new club, but this isn’t the Astros’ first rodeo when it comes to taking starting pitchers to a new level. Although he was already well established, Justin Verlander has experienced a different kind of late-career resurgence since coming to Houston in August of 2017. The same can be said about Gerrit Cole, who is on the verge of a huge payday following two outstanding years with the Astros. Charlie Morton also experienced a similar kind of success before signing with the Tampa Bay Rays this past winter.

Even considering that he faced a struggling team in Seattle, it’s not at all surprising to see Sanchez immediately see positive results in his new threads. It didn’t take long for Mike Petriello of MLB.com to notice certain trends in what the right-hander was doing, either.

There are a couple things that really jump out here, though. One is Sanchez’s curveball usage, which Petriello preemptively noted prior to the hurler even getting traded:

I wrote about Aaron Sanchez, new Astro, a month ago, and I'm verrrry interested in how this goes pic.twitter.com/XKREQHbd0Q

As he mentions in the tweet above, Sanchez has been throwing his curveball more than ever in 2019. After never using it more than 16.6% of the time during a single season (and just 12.0% in ’18), he was using it at a 22.3% clip with Toronto this year. Based off his single start with Houston, Sanchez decreased his fastball usage by six percentage points, his changeup usage by two percentage points, and put that difference into his curveball, which had a 30.4% usage rate.

It’s also interesting to see how often he lived outside the strike zone. Here’s a quick peek at the change in his first-pitch strike rate and zone rate between Toronto and that one start in Houston this season:

Sanchez’s overall swing rate from opposing hitters dropped from 44.6% (with Toronto) to 38.0% (with Houston), but it came in the right situations. His chase rate increased three percentage points, while his swing rate on strikes went down about 13 percentage points. That led to a 15-percentage-point drop in contact rate, along with a dramatic rise in swinging-strike rate (8.7% to 13.0%).

Again, this should all be taken with a grain of salt because of the uneven sample sizes. But given the Astros’ recent track record, it’s hard to not think something else is going on here. It remains to be seen whether Sanchez will become the next in a long line of pitchers to find another gear while playing for the Astros. Either way, the early returns sure look strong.

The Astros front office was lauded for adding Greinke (who has multiple years left on his contract) with Verlander and a rehabbing Lance McCullers Jr. since both Cole and Wade Miley are free agents at season’s end. Suddenly, the front of their rotation looks better and more stable than originally thought. But if Sanchez uncovers his potential? That’d also be huge — he’s under team control via arbitration next year before hitting the open market.