Oh What A Night for Eagles and Fans... 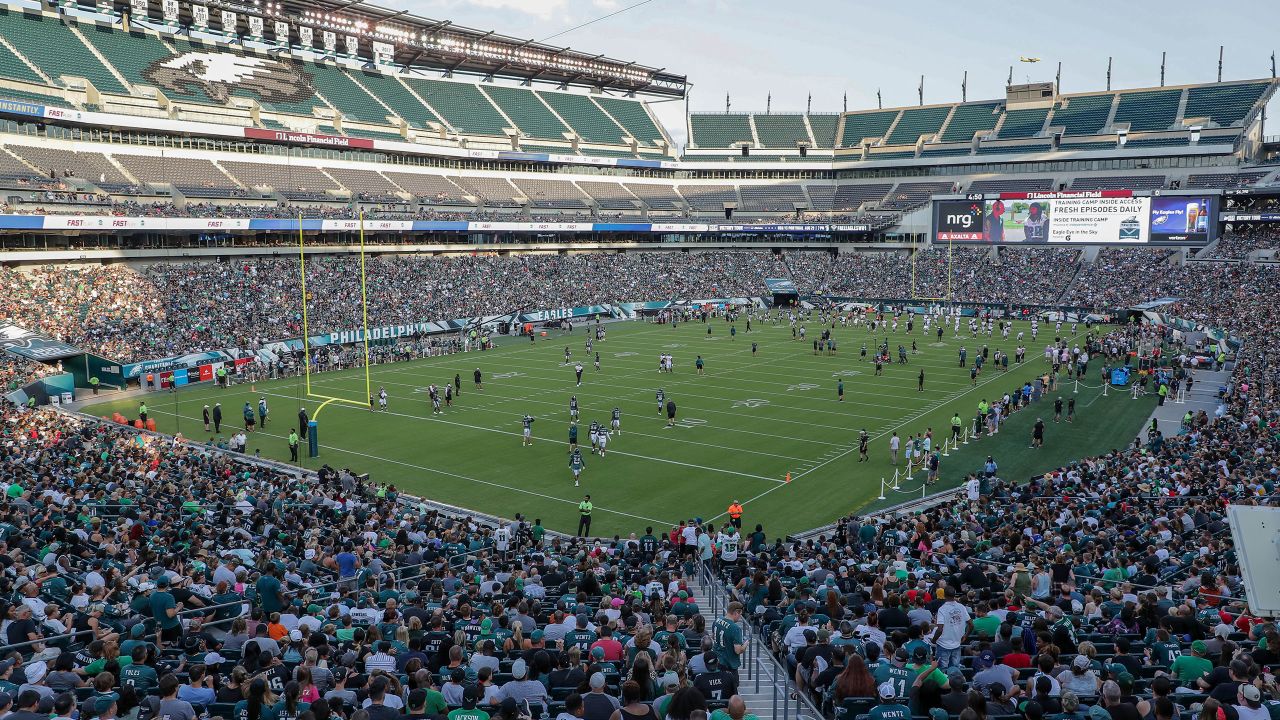 Oh What A Night for Eagles and Fans...

40,000 fans attended the Eagles’ one and only open practice at the Linc in Philly Sunday night. At $10 a pop (albeit all proceeds go to Autism research charity), the attendance figure is even more impressive.

We even had our very own EYE correspondents on site, including Ben (Beans) Watt from Australia and the diehard Dutch Rubb from central Pennsylvania, who posted some real-time video on Facebook (if you search “Jeffrey Dotterer”, you can find his video on FB).

What this event proved is Eagles fans are hungry for football beyond the norm. Whether you perceive pro football as an escape from real-life problems, or as a mirrored reflection of real-life struggles, the Eagles fan-base has got all angles covered.

In a gadda da vida baby, I know I will always love you…

Carson Wentz got a standing ovation when he took the practice field— if you can check out the video of it with sound, do so. It will be posted somewhere, I’m sure. It sent chills up me spine. It also sent the traditional Philly warning— “if you let us down, we will turn on you with equal vigor and venom.”

What the good vibes of the relatively light workout in front of the fans didn’t allude to was the carnage suffered in the previous practice—and also on Sunday night.

Linebacker Kamu Grugier-Hill suffered what head coach Doug Pederson called a “lower-body” injury in Saturday’s practice. The team has not officially updated the status of Grugier-Hill, nor have the Eagles addressed reports that he suffered an MCL injury in his left knee. Grugier-Hill, cornerback Cre’Von LeBlanc (LisFranc foot injury), and defensive end Joe Ostman – who was carted off the field Sunday night – are the three players who will miss significant time now. Chances are likely at least one of them are done for the season.

But these guys who play the game have always known the risks of potentially career-ending injury, even when it’s just “practice”.  It’s no coincidence that prayer groups abound in the NFL.

Wentz had such a dynamic practice before the fans that you’d be forgiven for thinking the fix was in.

He looked dominant at times, spreading the ball around to all his receivers. Despite it being a practice, Wentz was sharp, completing 17/29 of his passes for 6 TDs and 0 INTs and one beautiful aerial to DeSean Jackson that the quarterback put on a clothesline, 55 yards in the air.

Wentz is fully healthy for the first time in two years. That’s the beauty of youth—you get a window for rapid recovery from debilitating injuries. Based upon what Wentz has been through, physically speaking, two years is rapid recovery. If it were EYE,  I’d still be on crutches and in a back brace.

Speaking of DJAX, he got what was probably the second loudest crowd affirmation of the night. The Philly cynic in me immediately thought we are placing too much expectation on this aging cat. But for now, eat it up. Yet during 7-on-7’s, Avonte Maddox had a great rep against Jackson. He stayed with him stride for stride in the red zone and was able to knock the ball down.

Obviously it was a major downer when Joe Ostman got carted off the field. The kid was actually making a realistic bid to stick on the 53.  That ship has now sailed, along with the SS Bradley of ancient lore.

In case you are keeping score, the Eagles are running out of linebackers.

Without Kamu Grugier-Hill (who has now confirmed he has an MCL sprain) and without Nigel Bradham (who is still recovering from offseason surgery), here were the Eagles’ three linebacker pairings on Sunday:

With three injuries at the LB position, the Eagles on Sunday morning signed linebacker Asantay Brown, who was with the team last summer. Brown was with the Eagles’ last training camp and spent a good portion of the 2018 season on the practice squad. He went undrafted last year out of Western Michigan. Brown is a hybrid-type player at 6-0, 215 pounds. The Eagles list him as a linebacker, but he’s just four pounds heavier than recently-signed safety Johnathan Cyprien.

At least RB Miles Sanders looks completely healthy— he made a really great jump cut during 11-on-11s to bounce outside to the right and score a five-yard touchdown. Nobody makes that move and gets away with it except a young Shady McCoy.

Darren Sproles had one electrifying moment on Sunday, according to Dave Zangaro of NBC Sports. He bounced a run outside and beat the defense to the end zone. Nice round of applause for No. 43…

Speaking of the cornerback injury/recovery situation, we’re pretty thin there at the moment. Sidney Jones and Rasul Douglas were the starters in the base package, and Jones slid inside in the nickel while Avonte Maddox went to LCB. Decent enough in practice at the Linc against your own guys, but EYE don’t see that combo holding up too well when the live ammo starts flying.