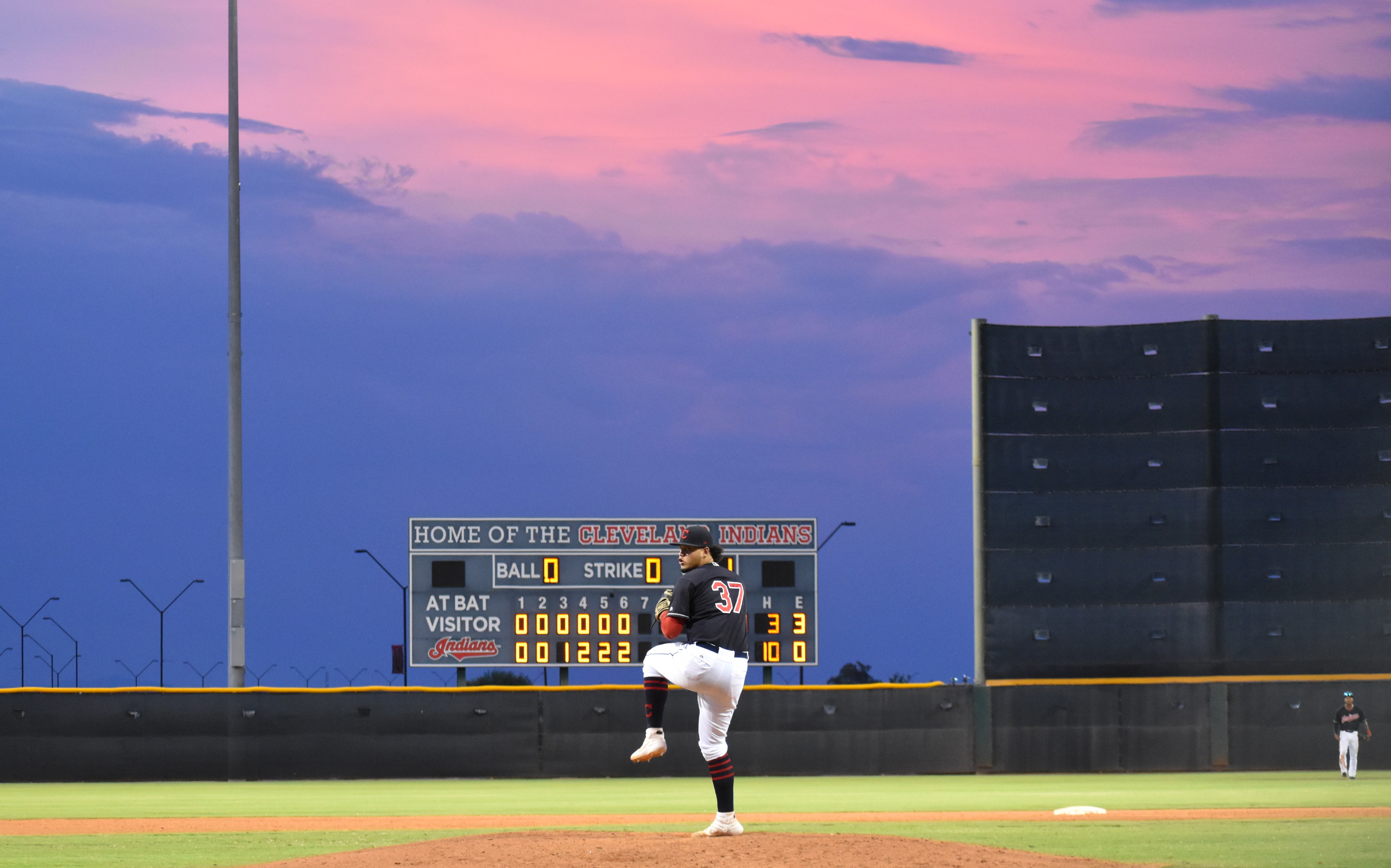 It was a bit of a tumultuous end to July for team Blue as Julian Escobedo, Hunter Gaddis and Will Brennan were all promoted and they dropped four of five games from July 27th through August 1st, but the have completely turned things around since.

Nova makes his debut for the 2019 AZL Indians Blue after being traded from San Diego. – Joseph Coblitz, BurningRiverBaseball

While they lost on August 1st against Dodgers Mota, they did so with 13 hits and largely because of five errors and four steals allowed. There were some positives in this loss, however, as newby Victor Nova made his first appearance as an Indian with three hits. Nova came to the Indians from San Diego in the Trevor Bauer trade and is now hitting .330/.431/.440 between both teams. This is his second season as a professional and first in the United States. With hits in all but one game with the Indians Blue, he now has reached base in 13 straight games.

Another positive note for Cleveland from that loss was Shane McCarthy‘s rehab start. He made nine starts for Lake County this year before hitting the IL on May 24th. This appearance was his first since then and he went two shut out innings with no hits, a walk and two strike outs. He made one more start before the week ended on August 6th when he went three innings, struck out five and allowed just one hit. McCarthy pitched for AZL Indians Red last year and had a tremendous season before being promoted to Mahoning Valley.

Alfonseca takes a lead off third base for the AZL Indians Blue during the 2019 season. – Joseph Coblitz, BurningRiverBaseball

The Indians Blue started their current five game winning streak on August 2nd with a big 11-9 win against Dodgers Mota. In addition to Nova reaching base three more times, Pedro Alfonseca, Jose Tena, Jhonkensy Noel and Gaspar Palacio all had two hit games with at least one extra base hit. Alfonseca lead the way here with his first home run since his recent demotion from Mahoning Valley. Showing that his hitting ability likely lies between rookie and short season right now, Alfonseca hit another home run two days later and is now hitting .520/.586/.920 through his first six games back.

Jordan Jones had a great start in this game, going two scoreless innings with two strike outs and no walks, but Chandler Fidel let things get away a bit with seven runs allowed in the next two innings. Thanks to the offense keeping the pedal down, Nate Ocker was able to earn the save with a scoreless ninth.

Team Blue won again on August 3rd, although it may have been the ugliest game I’ve ever witnessed in person. Nine errors were recorded between the two teams, but that number could have been twice that with a more strict official scorer. Neither team was safe as the game was filled with boneheaded moves by both teams in every facet of the game.

In order to focus on the positive, Ulysses Cantu had he best game of the season with two doubles and walk while on rehab assignment. Most importantly, he didn’t commit an error as the first baseman. Cantu hasn’t had a very easy run since beginning this rehab assignment on July 26th and this game could be a sign of improvement.

Also in a rehab assignment, Nick Gallagher pitched one perfect inning in relief with two strike outs. This was his second such appearance and he has now pitched three innings with just one hit allowed. Gallagher had been starting for Lynchburg prior to the injury, but has spent plenty of time in the bullpen and it appears that he will stay there upon his return to high A.

To wrap up the week, Indians Blue had a pair of incredible pitching performances started off by Luis D. Garcia on Monday. Against the Royals, Garcia tied his career high with seven innings pitched and walked just one with no earned runs allowed. Garcia was incredibly efficient in this game and helped the team win this game in less than two and a half hours, despite scoring nine runs on offense. Wilmer Mejia wrapped up the final two innings without allowing a baserunner and striking out four.

The big offensive day was lead by Alfonseca, who had his second home run and four hits overall, as well as the Royals defense, who committed three errors leading to three unearned runs. Noel and Jothson Flores each added home runs as well while Wilfri Peralta hit a triple.

While this start was impressive, the pitching staff was even better on Tuesday against the Angels. Following McCarthy’s second rehab start and Gallagher’s third, Daritzon Feliz pitched the final five innings, striking out eight and allowing just one run on one hit and one walk. Overall, the Indians allowed two hits, one walk and struck out 14.

Again, the Indians offense was aided by the other team’s defense as the Angels committed five errors and allowed three unearned runs. Even so, Cristopher Cespedes had two hits and a walk while Noel had a hit and a walk. Both knocked in one run as well.

Noel has been a power threat all season, but cooled off significantly at the end of June. He has been scorching hot of late, however, hitting reaching safely in 11 straight games. Since July 23rd, he has hit .381/.420/.548 with five extra base hits and five walks, only striking out five times in 50 plate appearances. This is about half of his strikeout rate for the season as a whole.

Team Blue wrapped up the week with another win backed by another strong performance by the pitching staff. Jones started with another three scoreless innings to drop his ERA to 1.98 followed by Chandler Fidel, Nic Enright and Jhonneyver Gutierrez added five more scoreless. Wilton Sanchez then struggled, however, giving up two hits and three walks leading to the only four runs of the game. Joel De La Cruz wrapped up the final two outs without another hit allowed, meaning the staff minus Sanchez pitched 8.2 innings of shut out baseball with two hits, three walks and eight strike outs.

On the offensive side, there was success up and down the line-up and two players already mentioned, Cespedes and Alfonseca, were among the top performers. Alfonseca hit his third home run of the week and Cespedes hit his 16th double to bring his slugging percent to .532.