Your Morning Dump... Where the guys are having fun again. 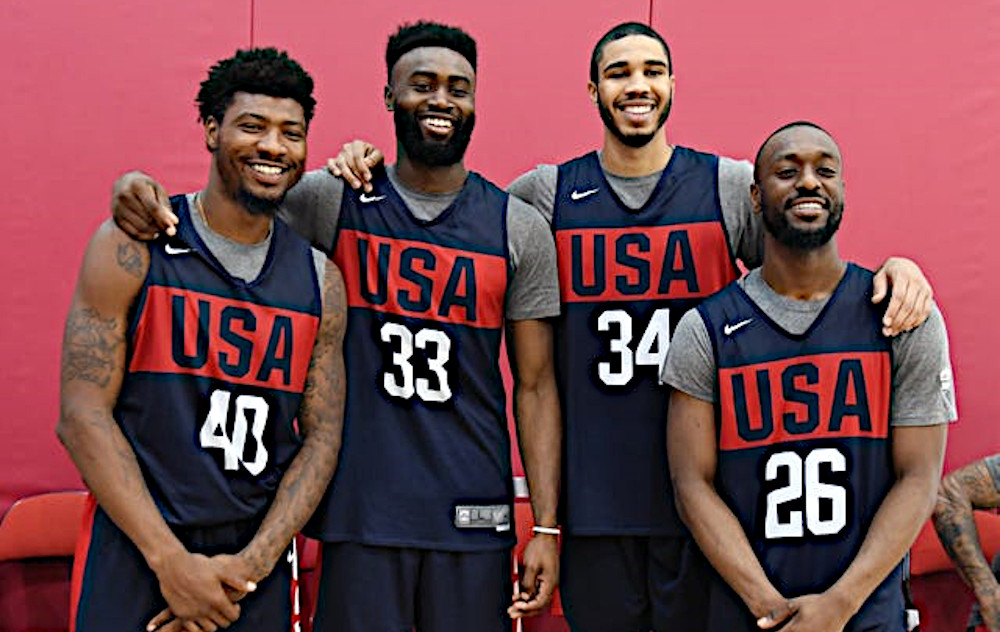 Your Morning Dump... Where the guys are having fun again.

Today’s dump leads off with a hodge-podge of clippings from the Team USA camp:

One thing Tatum is getting used to quickly is playing with his new Celtics teammate Kemba Walker.

“It’s a lot of fun, especially playing with Kemba and getting some early chemistry,” Tatum said. “Being out there and playing with him has been fun.”

Meanwhile, Chris Forsberg’s got the scoop on Tatum and Brown wearing numbers 34 and 33:

“I could lie and say I picked it for my man Paul [Pierce] but I didn’t. They gave it to me,” Tatum said of the No. 34 on his training camp jersey. “I don’t know if it was on purpose or a coincidence, but I like 34.”

When Team USA released its numeric roster before the start of this week’s training camp in Las Vegas, the number choices for Tatum and Jaylen Brown (33) left many Celtics fans wondering if the young guys were offering subtle nods to a couple of Celtics legends.

It turns out that none of the Celtics in Vegas picked their own jersey number.

A Team USA spokesman said that jersey numbers are randomly assigned, typically with sizing considerations. Those in training camp this year range from Kyle Kuzma at No. 21 to Khris Middleton with No. 57 (one of five players in the 50s).

Jeez, it seems weird to me that Team USA assigns practice squad numbers pretty much the way a South Dakota Class B high school team does.

And Brad Stevens knows why we keep talking about last season…

“It’s funny because I think, on the outside, because there’s not much to talk about for two months in the summer, that’s kind of been the consistent story,” Celtics coach Brad Stevens told NBC Sports Boston while visiting Team USA training camp on Wednesday. “On the inside, we moved on past it a long time ago. It’s been a great vibe in our building. We have a great group of workers.

“Jaylen [Brown] and Jayson [Tatum] are here but they were in Boston last week working all the way up until this point. Obviously, we’ve had a ton of our young guys through. We turned that page a long time ago. That’s what you should do after a season. I think, whether you had success or it wasn’t as good as you want, you learn from it and move on.”

It was Anaïs Nin who said “we don’t see things as they are, we see them as we are.” And that’s worth remembering as you digest my take on other writers’ observations from the Celtics summer activities.

By this point in time, what you’re seeing is pretty far removed from what these guys are doing. Both MassLive and NBC Sports have to produce content steadily all summer long. To a lesser extent, so do those of us toiling away for Red’s Army. We’re going to latch onto stuff that ‘has legs’, like speculation about the team’s issues last season and how they’ll respond this season.

But the team has moved on. The Celtics are a leisure pursuit for us, they’re a job for the guys on the roster. In the absence of games, we need to have something to talk about, but these guys have been busy working their day jobs.

The main thing is that everybody seems to be enjoying themselves. Everybody from the players on up to ownership seem to have put the past firmly in the past. Nobody seems to be dwelling on the things that could’ve been done better or differently.

Page 2: Where Tacko is not on Team Senegal

Fall had been in Senegal, where he was on the preliminary roster for the Senegalese national team. Today, Senegal announced its official roster, which didn’t include Fall.

Despite widespread reports that he had been cut, it was never Fall’s intention to play for his national team in the FIBA World Cup. He had traveled back to his home country for the first time in seven years for a Basketball Without Borders event and a visit with his family.

No surprises here. Fall hasn’t been back to Senegal in seven years, and he’s headed back to the states to continue working out with Celtics coaches, which makes sense. For established NBA players like Tatum, Brown, Smart and Walker, playing competitive ball in a world cup has different ramifications than for a guy like Tacko.

In the first place, just landing a roster spot on Team USA is going to challenge Tatum and Brown (Walker is pretty much a shoo-in and Smart’s done practicing with the team), and that’s good for their development. However, Tacko Fall’s spot on the Senegal National Team was probably there for the asking (only one player from Senegal is on an NBA roster: Gorgui Dieng). For him to improve the skills he’ll need to stick in the NBA, it’s better for him to continue working on NBA fundamentals with the Celtics’ staff back in Boston.