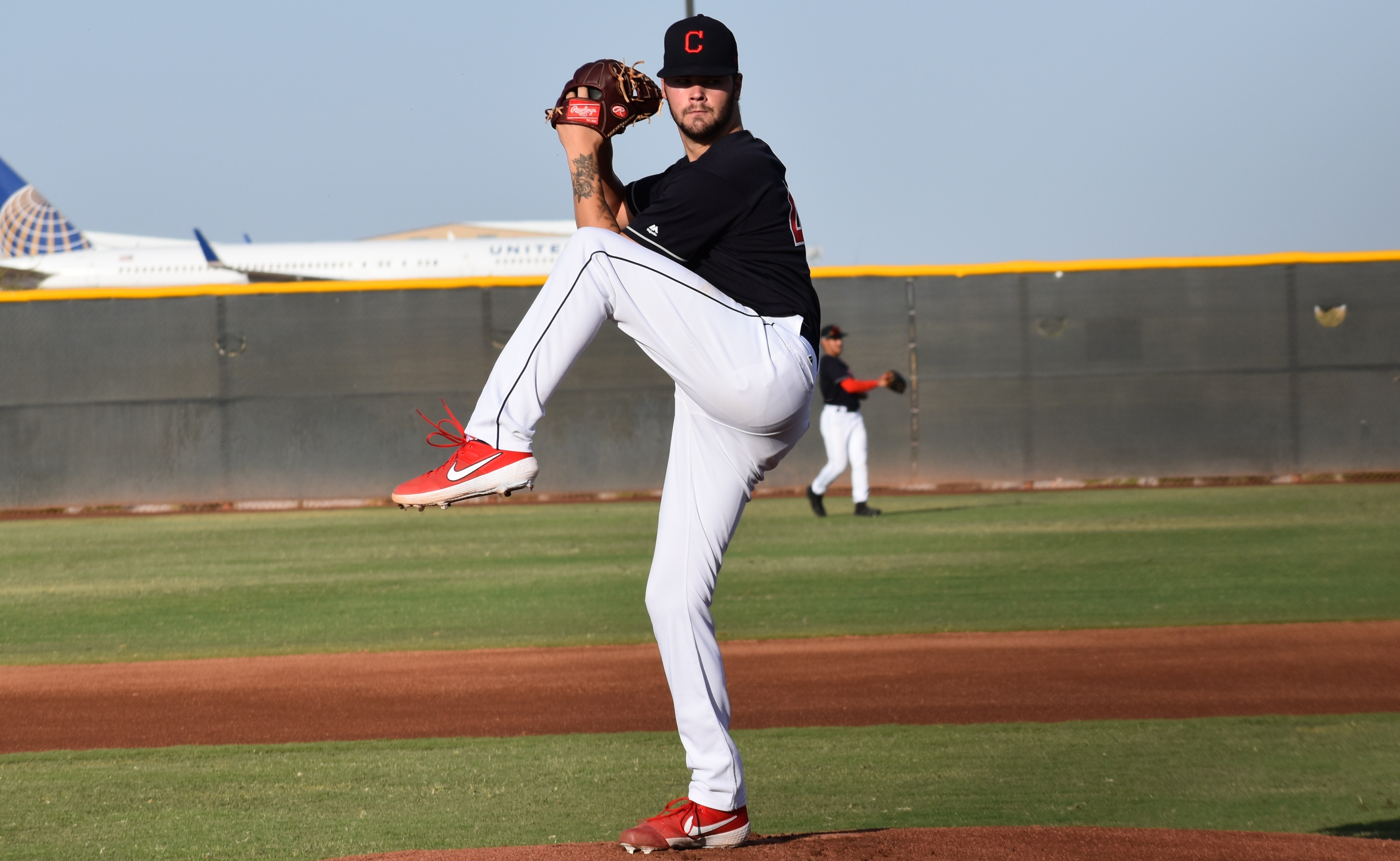 Injuries have really decimated the top of the Indians pitching prospect lists for both right and left handers, but we’ll still power through with a brand new top ten Indians minor league right handed starting pitchers. Gone from the 2018 list are Aaron Civale and Zach Plesac, who graduated to the big leagues, as well as Ignacio Feliz, who was traded to San Diego and Matt Esparza, who was released. Thanks to a solid draft and international signing class, Shao-Ching Chiang, last year’s number two, has been pushed out of the top ten. In all, this is a very deep list and there were at least five other pitchers who were a very tough decision to not include.

Mejia hasn’t been a starter long (2018), but has made the most of it with a K/9 above nine and a BB/9 below 2.5 each of his first two seasons. This year has been cut short by a groin injury that required surgery to repair and cost him nearly all of his 2019 season. He’s still young for the level, but missing most of this season will push him back to average as far as age is concerned. He doesn’t have the swing and miss stuff that most on this list do, but I think Mejia projects well as a long/mid reliever and could fit well if the Indians use some sort of opener strategy in the future.

He may not be the flashiest player drafted in 2019, but Gaddis is the type of guy the Indians love. He focuses on control first with a good fast ball and had a very dominating beginning to his career. While he has only made a few starts, he struck out 26 in his first 17.1 innings with just three walks allowed. The Indians are severely limiting his innings, keeping him at three per appearance in most starts, but he already has three appearances with at least three innings and just one hit allowed and four appearances with at least five strike outs. Gaddis needs to get to Lake County by next year to prove himself against better talent, but he seems like another great pick by the Indians out of the college starting ranks.

With all the focus on Lenny Torres and Ethan Hankins from the 2018 draft, quite a few other pitchers have gone overlooked. Just missing this list were Shane McCarthy and Alex Royalty while Morris did enough for me between extended spring training and A ball to make him a top 10 hit. His speed differential is really special as he can hit mid-90’s with his fast ball and has a breaking pitch below 80. He had elite control in Lake County that helped him earn a mid-season promotion to Lynchburg. He has posted nearly identical numbers at high A as low A, proving that the move was warranted.

In the on again, off again life of Oviedo, he was having a very down year in Lake County prior to hitting the IL late in July. There is a bit more concern this time compared to last time as he was posting nonsensical peripheral stats in 2017 when compared to things like ERA and WHIP. Last year, things flipped and he was the top pitcher in the Indians system between Mahoning Valley and Lake County. Now, his walk rate has risen and strike out rate fallen to make his poor ERA more legitimate.

He definitely has the fact that he ended 2018 with injury and has hurt himself again in 2019 as an excuse, however, and is still one of the youngest players in Lake County, so he has plenty of time to turn things around. This season could force him to start 2020 in A ball again, however, and the combination of extremely high competition from Advanced A down and his injury issues will make this an uphill climb.

Espino looks in for the sign during a 2019 Arizona League Indians Red game. – Joseph Coblitz, BurningRiverBaseball

Espino has a very interesting story already and it is continuing to get better. Born in Panama, Espino wasn’t signed as an international free agent and convinced his family to move to Georgia so he could have a second chance to be seen by MLB scouts. The strategy obviously worked as the Indians took the 18 year old in the first round out of Georgia Premier Academy.

Now that he is in the system, Espino is flourishing. Nearing triple digits on his fast ball, he has a 0.90 ERA through his first five starts, although he is averaging only two innings per appearance as the Indians are moving him slowly during his rookie campaign. Espino has incredible talent and potential and he will likely move up this list as he moves up the system and we get a chance to see a little more of the kid.

The Indians haven’t had many high end international signings on the pitching staff, especially compared to their infielders, but Vargas is the best of the best. He has a strong fastball and good slider, but struggled once he was promoted to Mahoning Valley. This is a situation where you may look at the stats and think I’m crazy, but based on eye test and general consensus, Vargas has one of the highest ceilings among those on the list.

If you need evidence of forward momentum, since July 19th, Vargas has a 2.66 ERA and 20 strike outs in 23.2 in his last four starts, a significant improvement over his first six starts.

Torres pitches for the Indians during 2019 extended spring training prior to his Tommy John surgery. – Joseph Coblitz, BurningRiverBaseball

The biggest tease on the list, Torres looked incredible in his short stint in the AZL last year and was pitching in extended spring when he felt pain in his elbow. Almost immediately, Torres underwent Tommy John surgery, costing him all of the 2019 season and likely the first half of 2020. While he was initially on the level with his fellow 2018 first round pick Ethan Hankins, he has now fallen significantly behind and could be a full two levels back once he returns from injury. He still has a great ceiling, but his stumble out of the block thanks to the surgery gives significant doubts about his floor.

Since being drafted in 2017, Morgan has arguably been the Indians top MiLB pitcher with a 2.84 ERA across all levels, a 10.3 K/9 and 2.4 BB/9. In a very similar vein to Shane Bieber, Morgan was an established college starter with Gonzaga and has been able to move quickly through the Indians system. In terms of ceiling, Morgan sits behind nearly everyone on this list, but in terms of floor he sits at the top.

Health doesn’t appear to be an issue of yet for Morgan, who has pitched at least 100 innings every season since 2016 (with Gonzaga) and it wouldn’t be surprising to see Morgan in the big leagues by 2021 as a back end starter.

McKenzie has been listed by Burning River Baseball as the Indians top prospect in every ranking since 2016, but he will fall out of that spot in the 2019 version after missing all of 2019 with a back strain. When he has pitched, I’ve never seen someone so dominant. McKenzie has pinpoint command, good velocity and great movement. His change in speeds is elite and can be essentially unhittable.

However, if he can’t get on a mound, none of that matters. If he had been healthy this year, there was room for him in Columbus and he may have been promoted to the big leagues instead of Civale or Plesac. With Trevor Bauer gone, there will certainly be more similar opportunities in 2020 and McKenzie could take advantage if he can simply get back on the field.

While Hankins ultimately gets the #1 spot due to his luck in not being injured, he is deserving of the spot on his own merit. He missed almost all of 2018, but came back for extended spring training this year and pitched well, leading into an incredible start in Mahoning Valley where he went his first 8.2 innings without a hit or run allowed.

Hankins both is excellent at missing bats (10 K/9) and inducing weak contact (three extra base hits allowed this year with just six line drives allowed through 38.2 IP). In general, Hankins has had great command, but it has eluded him at times this year. Ultimately, Hankins has mid-rotation stuff and could be fast tracked up the system once he extends his starts beyond five innings per appearance.