The wild roller coaster life of Will Benson 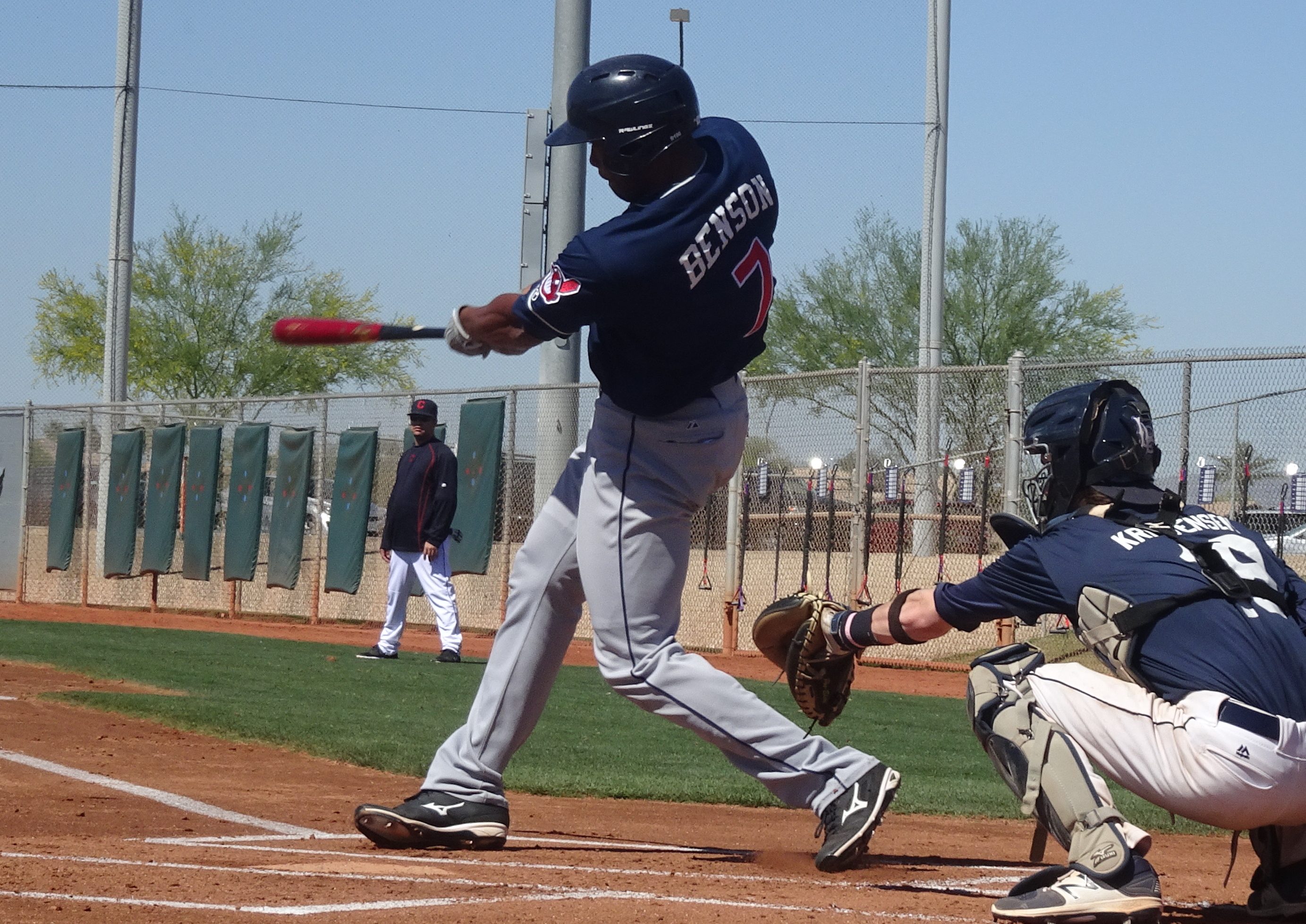 The wild roller coaster life of Will Benson

Will Benson has been an interesting and very polarizing prospect ever since he was taken in the first round by the Indians in 2016. A well thought of high school hitter known for his size (6’5″ 225 lb), Benson had huge power potential with great speed and quite a few holes in his swing. The Indians knew from the start that they’d be getting a high risk, high reward player, but no one could have predicted his 2019 season.

Benson had been on a fairly slow path, playing a full season in Arizona (2016) and Mahoning Valley (2017) before hitting Lake County last year. His offense numbers each season showed the promise of an elite hitter, but with many more failures than successes. His 2018 season was a dramatic disappointment with a .180/.324/.370 batting line and a 102 wRC+.

The extreme outlier in 2018 was an incredible .218 BABIP. Benson has good speed and hits a lot of line drives and fly balls, so one could expect his BABIP to be in the .300 to .320 range and when it sat 100 points below that, it destroyed his batting line. This was obviously unsustainable and it wasn’t shocking that he completely turned things around in 2019.

Still in Lake County, Benson played 62 games with the Captains prior to promotion and hit .272/.371/.604 with a .325 BABIP, 170 wRC+ and 18 home runs. While you could credit this to Benson having a more mature approach at the plate thanks to a second season at this level, his strike out rate was an identical 30% and his walk rate actually dropped from 16% to 14%. His line drive rate also fell and he began to hit more ground balls. Further proof that this was story of luck (or a different baseball) is that hit home run per fly ball rate went from 16% for two straight seasons to 24%! While this number isn’t that insane for a Major League slugger, the current qualified leader in A ball is the Dodgers’ Luke Heyer at 17.7%.

So, in reality Benson isn’t as bad as he looked in Lake County in 2018 or as good as he looked in 2019, but there was no argument that he shouldn’t be in high A. He was promoted to Lynchburg on June 20th, hit two home runs in his first six games, then completely fell off a cliff. The roller coaster that has been Benson’s career thus far is apparently Top Thrill Dragster and after that extremely high peak, fell right back down to the bottom.

Through 43 games, his numbers are even worse in Lynchburg than they were last year in Lake County as he is now hitting .197/.308/.342. Again, one may be tempted to blame the drop of a lack of readiness for the level, but again his strike out rate remained constant at 30% and his walk rate dropped just slightly to 13%. His line drive rate also rose back to his career norm while his infield fly ball rate has dropped. Everything is right where it should be for Benson, yet his lack of home run production has dropped his wRC+ to 89, his first career mark below league average.

This time, BABIP is not to blame. While a bit low at .271, that is certainly within the realm of normalcy for a baseball player. Instead, the crazy out of line stat this time is his HR/FB rate flipping the opposite direction. Instead of being absurdly high, it is now 8%. While he is pulling the ball a little less often than normal, he is doing so at the rate he was every season prior to 2019.

2019 Lynchburg Spray Chart – Baseball SavantThe spray charts above show the difference in hit placement between Lake County (top) and Lynchburg (bottom). The parks are similar in structure with Lynchburg having corners five feet deeper than Lake County, but a center field 10 feet shallower. The extra foul outs to the third base side with the Captains were likely due to the amount of foul territory at Classic Park that doesn’t exist to the same extreme at Calvin Falwell Field in Lynchburg.

If anything, it appears that he is hitting the ball a bit further when he takes it back up the middle or to the opposite field. This is more like his chart from last season (below).

Potentially, this could be evidence that Benson should only try to pull the ball as nearly every bit of contact that has went anywhere but right field this season has been turned into an out. I will leave that argument to others, however. My point, instead, is don’t panic. I believe there is enough evidence to show that this isn’t a case of being underdeveloped and as long as his strike out rate doesn’t rise any more, he still should be seen to have great MLB potential.

In addition, it appears things may be evening out a bit. Over his last game (SSS alert) he has three doubles and a home run, following a 27 game run where he had the same totals. Over those last eight games, he is hitting .310/.447/.517 with a .364 BABIP. I don’t know that Will enjoys amusement parks, but his roller coaster appears to be back on the way up. We will likely have to wait until next season to see if he can keep it there or if his career will continue on in such a diametric fashion.