No Foles or Wentz in Eagles-Jaguars PS2... 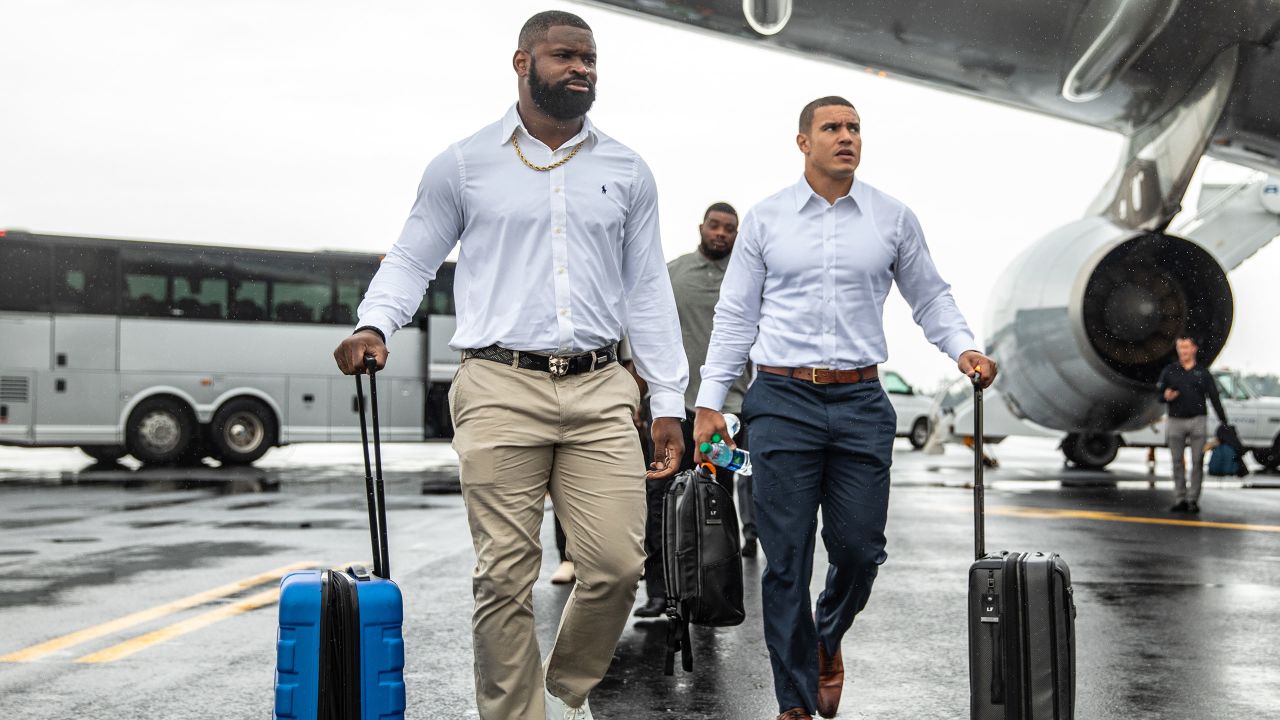 No Foles or Wentz in Eagles-Jaguars PS2...

First road trip for the Birds, and two things you won’t see in the game in Jacksonville on Thursday night (7:30 PM EST) are the starting QB’s from either franchise.

Instead of Carson Wentz or the injured #2 QB Nate Sudfeld, the Eagles are going to go with Cody Kessler and Clayton Thorson. It’s pretty much put up or adios time for Kessler. Thorson needs a better outing too, although thanks to his youth and draft status he has a much longer leash.

The Jags are giving Gardner Minshew the start at QB, unwilling to risk Nick Foles’ health in a game which will be mostly a tryout session for the 2’s, 3’s and 4’s.

Minshew was shaky against the Ravens’ 2nd team defense last week. Slowing the game down and dissecting the defense will be a tough task for Minshew. If he can get it done, he will without a doubt go into the season as Nick Foles’ backup.

My EYE will be mostly focused on the linebackers from both teams for this one.

The Jaguars have some concerns going into the season with their linebacking situation. Quite possibly the most vulnerable position on the team, the linebacker unit took some shots early on before the preseason even started. With Telvin Smith announcing that he would be sitting out for the 2019 season to focus on his personal life, the injuries of players destined to fill in for him (Quincy Williams and Jake Ryan) have been detrimental for the Jaguars growth.

Having other players that can fill the roles that Smith once held will be a major matchup to watch when they face off against the Eagles on Thursday. Our old buddy Najee Good and D.J. Alexander are the most talented linebackers remaining that have the chance to play in the absence of Ryan and Williams. Analyzing the way they read and react to plays and how well they play in coverage will determine if they play extensively in the regular season.

The same applies to the Eagles’ candidates trying to move up in the linebacker rotation.

According to Jimmy Kempski (Philly Voice), throughout training camp “Zach Brown hadn’t done much. In the first preseason game, he decided to turn it on, and played well. To be determined if Brown will play much in this game, as I would expect him to start in place of Kamu Grugier-Hill Week 1 against his former team, the Washington team. Nate Gerry, on the other hand, was less than awesome in the first preseason game. He needs significant improvement in game No. 2, or L.J. Fort, who looked good last week, will pass him in the linebacker pecking order, if he hasn’t already.”

You might also want to focus on our youngest Bird O-Liners:

“In the first preseason game, Andre Dillard was good, Jordan Mailata showed some good and bad, and Matt Pryor was bad. Ideally, the Eagles won’t need any of the three to play this year, but of the three, Dillard is by far the most important, in terms of evaluating his play in these preseason games, and the likelihood of him seeing time in meaningful moments this season.” —Kempski

There is also a reason to not leave your mancave on any “routine” kick by Jake Elliott, who has frankly been a bit shaky on his short-to-mid distance kicks in practice and in PS1.

EYE also want to see how our candidates in the secondary handle coverage against D.J. Chark, who’s trying to up his game in his second year in the league. Chark is looking to grow into a big-time receiver. As such, he received a bulk of targets and repetitions during training camp. Last week, Chark was the only top-end receiver for the Jags to get any playing time, and getting him reps after missing the majority of last season seems to be the objective.

Other Jags looking to stay alive against the Eagles:

Taven Bryan (DT)— After being picked in the first round of the 2018 draft, Bryan had a disappointing rookie season, and did not live up to expectations. As the Jaguars continue to advance closer and closer to the regular season, the guy they looked at as someone who would replace all-pro defensive tackle Malik Jackson has continued to have minimal impact on the field. Getting driven back at the snap and playing with no sense of tenacity has been Bryan’s downfall. Watch to see if he can get going the way he produced at Florida. The Jaguars drafted him to be the “Wyoming Wildman”, unfortunately, that side of Bryan has not been seen since lining up in orange and blue. If he’s not able to bring that side out of him in the preseason, he may have very little playtime come September 8th.

Will Richardson (RG)— Two years removed from college, Richardson is looking to take over the Jags’ wide-open starting spot at right guard. Formerly occupied by A.J. Cann, Richardson is quickly becoming the front runner to replace him. Being drafted as a right tackle, he made the switch to right guard as the Jaguars coaching staff saw he had the talent to play on the inside of the line. Being able to see Richardson and the progress he has made since his switch will be a point of interest Thursday versus the Eagles.

C.J. Reavis (S) — Coming off a PS1 effort where he showed everyone that he was here to stay, Reavis looks to build upon his previous outing where he accounted for eight tackles and was the bright spot for the Jaguars team as a whole. Watching to see if he can maintain consistency in dissecting plays as they’re happening and attacking the ball carrier will be huge in his earning a spot as a backup safety.