Your Morning Dump… Where the red, white and blue is tinted green 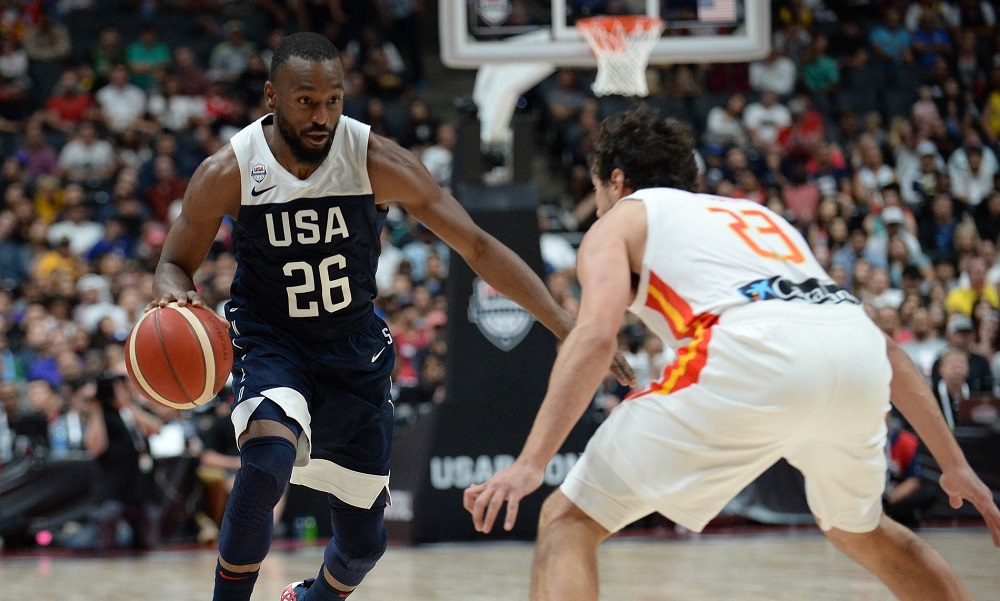 Your Morning Dump… Where the red, white and blue is tinted green

Team USA had no problems exploiting their advantages over Spain, handling their first taste of international competition in the lead-up to the 2019 FIBA World Cup in China with a 90-81 exhibition victory at Honda Center.

It wasn’t a 30-point rout that has been the program’s norm in recent gold medal winning efforts in World Cup and Olympic competitions. But it was a solid start to the Gregg Popovich era as the longtime San Antonio Spurs coach takes over after Duke coach Mike Krzyzewski led the program back to dominance.

Yes, last night was a good one for the USA men, and in particular for the four Boston Celtics on the roster.

Heading into the game, that roster was down to 14 players after PJ Tucker withdrew from the squad due to a sprained ankle suffered in practice Thursday. The group must be trimmed to 12 before the FIBA World Cup starts August 31 in China, but first…

All 14 remaining players will be going to Australia. Team USA will spend a week and a half in Melbourne and Sydney training and playing exhibitions against the Australian and Canadian national teams. Gregg Popovich told reporters after the game that all 14 players will make the trip because that was the fair thing to do.

This might give some extra motivation to those at risk of being cut, because that’s a long way to fly, only to be told “sorry.”

Based on last night’s results, all four Celtics seem likely to stick. The USA (no. 1 in the FIBA world rankings) took an early double-digit lead against Spain (ranked no. 2) and never looked back.

“I’m ready to get back out there.”@JaredSGreenberg chats with @smart_MS3 as he watches his #USABMNT teammates take on Spain! pic.twitter.com/61RR1E7H7s

Kemba Walker hesitates baseline to get @usabasketball on the board! #USABMNT #USAGotGame

Tatum taking it to the rim with authority pic.twitter.com/GZ3m4uDUgV

“We’re working hard to get better each and every day.”@JaredSGreenberg caught up with @KembaWalker after the #USABMNT's big win over Spain! pic.twitter.com/VcQKsiAi5z

On Page 2: O captain, my captain

Smart is indeed the smart choice when it comes to looking for leadership on this Celtics team.

And that leadership needs to be more than just talked about and embraced by his teammates.

It needs to become official; and by official, I mean Smart being named a team captain.

Arguably the most storied franchise in NBA history, the Celtics have not had a team captain since Rajon Rondo in 2014 – the longest stretch without a captain in franchise history.

Only 18 players in franchise history have been bestowed with the title.

NBC Sports Boston: Blakely: Smart should be captain of the Celtics

Brad Stevens has resisted naming a captain in an effort to give everyone an equal stake in the team. However, as A. Sherrod states so well, it’s time for Brad to see the light and give the honor to Smart. He’s certainly earned it.

Last season, the Celtics had a pseudo leader, and the older veterans failed to  correct the chemistry problems. All those guys are gone now. The Celtics don’t really have a “face of the franchise” anymore – but Smart could be it, and he will be for sure if he gets the “C” next to his name.

And, finally… The fun continues

He’s a Celtics rookie helping some special kids have a great amusement park day. And at 7′, 7″, Tacko Fall is the tallest guy they’ll ever meet. So, you should have seen him fold himself into the Canobie Lake Park rides in Salem, New Hampshire. The important thing is, he did it for the kids, and they loved it.

Joining Celtics center Tacko Fall was forward Grant Williams and guard Carsen Edwards, all rookies. The day was organized by the Celtics Shamrock Foundation to give some special kids a special day.

The group of about 50 children are either in foster care or have been adopted out of foster care.

CBS Boston: Celtics Rookies Head To Canobie Lake Park To Hang Out With Some Special Kids

You probably remember the iconic Kelly Olynyk images… no, not from Wizards Game 7… the ones of the big goofball flying down the water flume ride, long hair waving in the breeze, surrounded by happy kids. We saw those every summer, and it always looked like Kelly was having more fun than anyone.

Kelly is long gone, of course, but the Celtics continue to have their new young guys out there in the community, giving kids an experience they’ll never forget.

Hello from Canobie Lake Park, where Carsen Edwards, Grant Williams, and Tacko Fall are spending the day with children from @mspccboston. pic.twitter.com/r4p4C8KX4x

Ready for some rides with the families of @mspccboston pic.twitter.com/GKXl2evAOF

Fun at Canobie Lake Park for foster kids from the @mspccboston and #Celtics rookies Tacko Fall, Grant Williams and Carsen Edwards. Started on the teacups and ended up drenched!!! pic.twitter.com/mLqMIVoh48