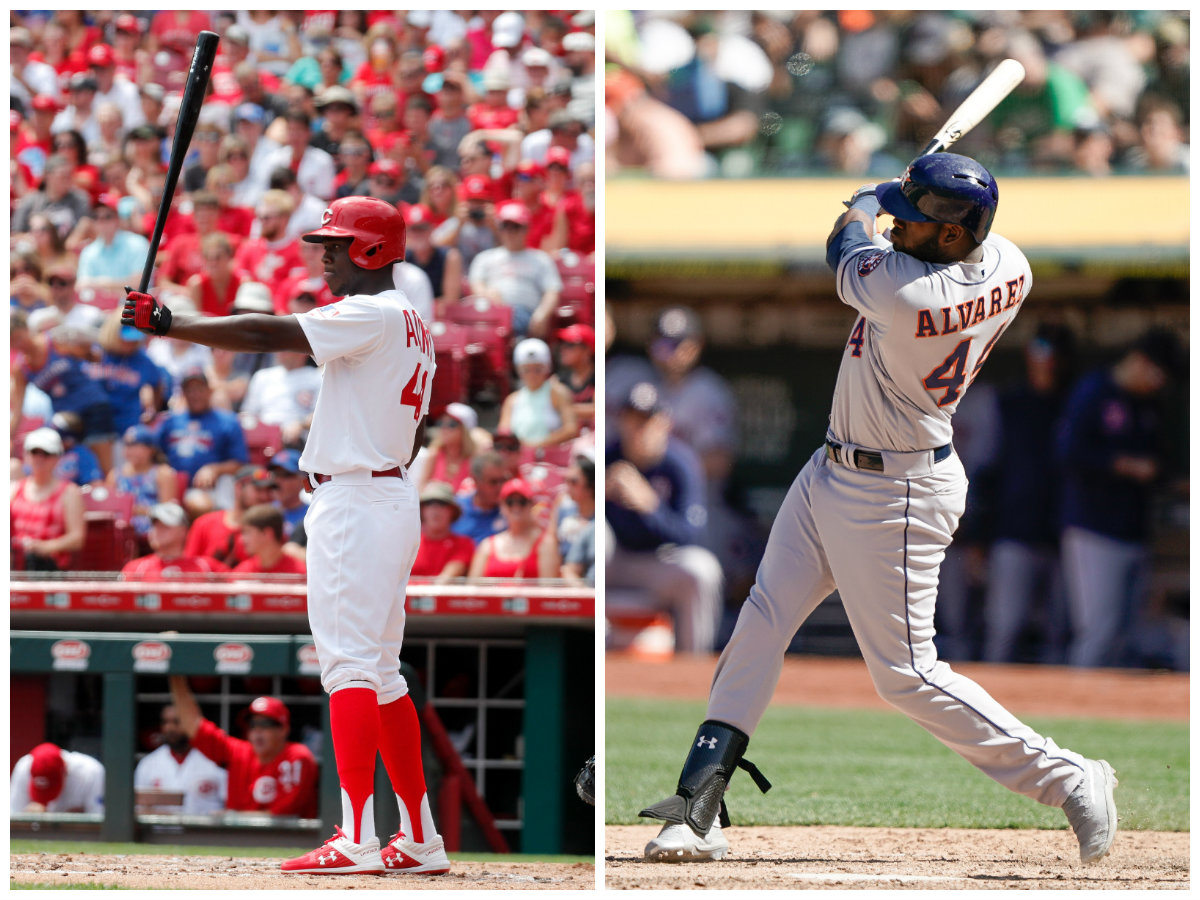 Major League Baseball has been blessed with plenty of exciting rookie players in 2019. Guys like Fernando Tatis Jr., Vladimir Guerrero Jr., Bo Bichette, Pete Alonso, Chris Paddack, and Mike Soroka are just a very small handful of what feels like a countless number of first-year players making an impact.

A couple hitters that have made waves throughout baseball despite not starting this season in the big leagues, though, are Aristides Aquino of the Cincinnati Reds and Yordan Alvarez of the Houston Astros.

When looking at these two, they’re quite different. With regard to Aquino, he’s a right-handed hitter for a National League team on the wrong side of the playoff picture, and he never made it on any big-time prospect lists before breaking out this year. As for Alvarez, he made his way through the minors with some prospect pedigree (consensus top-50 prospect heading into 2019). He’s also a left-handed slugger for an American League squad with an eye toward making a deep October run toward the Fall Classic.

The one huge thing they have in common, though? That’d be the ridiculous rate at which they’re collecting home runs since making their respective MLB debuts. Alvarez got called up earlier than Aquino, so he’s had more time to accumulate stats and have his name mentioned in the same breath as Ted Williams:

Yordan Alvarez has 55 RBI through his 1st 52 career games.

That’s tied with Ted Williams for the 3rd most in that span. He only trails Joe DiMaggio and Walt Dropo in @MLB history. pic.twitter.com/kiNKs0hfFX

And while Aquino has only been a big leaguer for 17 games, he clearly didn’t want to be outdone. The Reds’ rookie set an MLB record for being the quickest player to hit 11 home runs and is at the top of lists like these:

Although the start of Alvarez’s big-league career is impressive and eye-opening — it’s hard for a .335/.417/.701 line with 19 homers, 55 RBI, and a 189 wRC+ in 228 plate appearances to not be eye-opening — he at least showed this power in Triple-A before getting promoted. In fact, what he’s done so far with the Astros nearly mirrors what he accomplished in the minors this season.

That’s where the similarities lie once again between Alvarez and Aquino. While it’d be difficult to duplicate his current .596 ISO and 221 wRC+ over a longer sample size in the minors, Aquino flashed quite a bit of power himself at Triple-A Louisville. Through 323 plate appearances prior to making his big splash in Cincinnati, the right-handed hitter slashed .299/.356/.636 with 28 homers, 53 RBI, and a 144 wRC+.

So while these two have taken their respective leagues by storm with a tremendous ability to blast baseballs over outfield walls, it’s not like this came out of nowhere. It would’ve been impossible to predict the run of production they’re currently on, but the foreshadowing was there by looking at what they did in Triple-A.

It’ll be easier to compare their numbers when the sample sizes even out a little more, but it’s still a fun exercise to go through.

We can compare and contrast these two all day long. The main point we’re trying to make here is that these dudes rake and don’t really know how to stop. It’s fun to see both the National League and American League have a player making headlines and getting to this point in a similar yet different fashion.

How much more can they accomplish this year? When opposing pitchers figure out to how to tame them, how will they adjust? Those are some of the fun questions we’ll soon have answers to. For now, though? Let’s sit back and enjoy the ride of ridiculous things they’re doing on a baseball field.