Eagles and Ravens suffer and learn together in joint practice 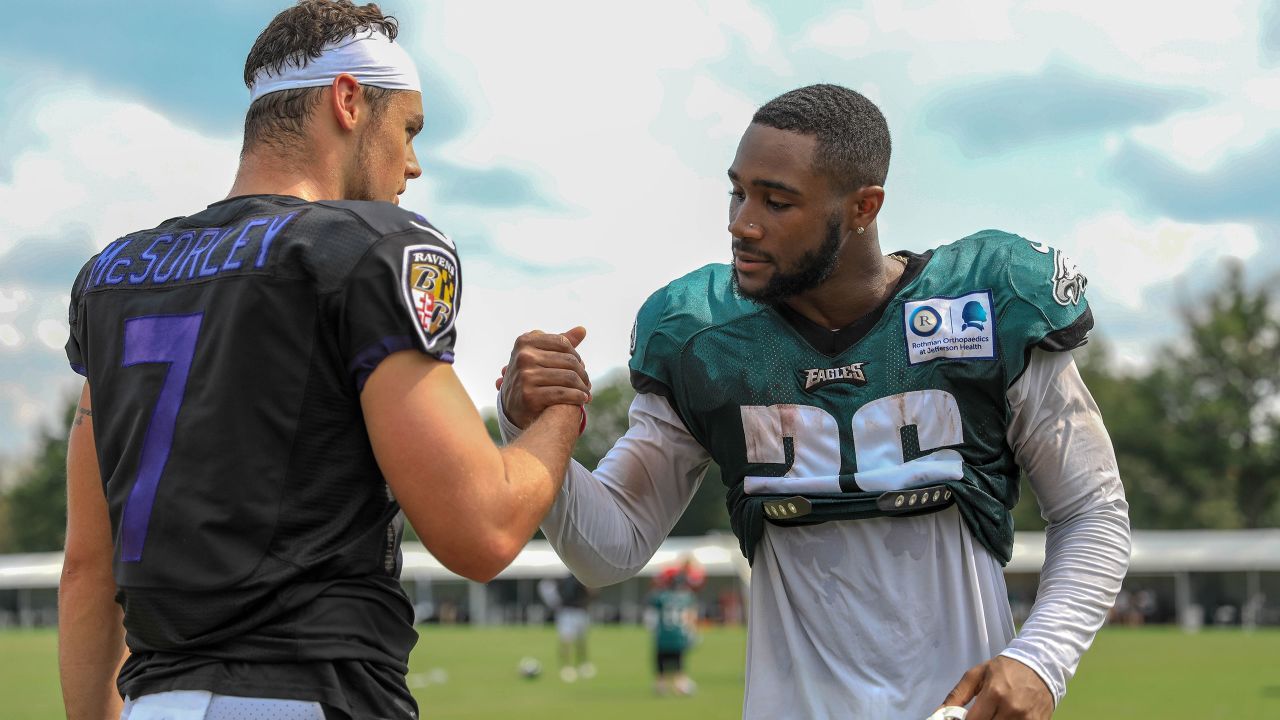 Eagles and Ravens suffer and learn together in joint practice

Joint practice between Eagles and Ravens in sweltering weather…no tackling to the ground, but plenty of contact allowed.

In theory it’s a great idea. With all the feel-good links between both franchises, from John Harbaugh’s ten years with Andy Reid to Howie Roseman’s friendship with former Ravens GM Ozzie Newsome to the fact that the Eagles have hired seemingly half of the Ravens’ scouting staff in recent years, it seems like a natural fit.

Systemically though, both teams are very different.

Ravens run a 3-4 base defense, Eagles a 4-3. Ravens on offense have a modified read-option deal which is run-heavy, Eagles a modified West Coast approach.

If you’re a stats guy, you will fall for the myth that the Ravens have a great defense. But the EYE test reveals the Ravens lost a lot of games over the past few years by giving up big plays on 3rd and 4th downs.

Still, the myth persists—“play like a Raven”— a clarion call left over from the days of Brian Billick and Ray Lewis. Nowadays a beefed-up Ravens secondary does evoke a tinge of the good old days of their “D-FENSE!”, but the fact is the Ravens lack a solid pass rush. So I was looking forward to seeing how Carson Wentz and his passing-based offense might carve up the Ravens secondary in 11-on-11’s and 7-on-7’s.

That didn’t exactly happen on Monday.

The Ravens secondary did a good job throughout the afternoon, forcing Eagles quarterbacks to check the ball down in several of these passing drill periods. Baltimore’s defensive backs had a couple of impressive breakups early in the drills, and when the first-team units came back onto the field, Wentz finally responded with a sharp completion between multiple defenders over the middle of the field to tight end Zach Ertz. It was one of Wentz’s best throws of the day. He followed that up with a nice throw to Nelson Agholor on a route run across the field (the ball was punched out by Ravens cornerback Marlon Humphrey) and then one last completion to Alshon Jeffery on the right side.

Wentz’s worst play of the day came when he didn’t see linebacker Kenny Young in an 11-on-11 drill. Wentz locked in on DeSean Jackson across the middle and Young jumped the route and should have picked it off. The ball bounced off his hands and was incomplete.

In other words, it was a tougher test for Wentz and his offense than anything they had seen so far this summer.

Same goes for Lamar Jackson and the Ravens offense. Eagles defense stiffened in the red zone drills. Jackson was 1-for-4 on red zone TD attempts and that required a sensational play by his tight end Mark Andrews.

“The red zone is tough,” Ravens HC John Harbaugh said. “The red zone is faster. Coverage is tighter. Things have to be executed more quickly, more decisively. The windows are going to be closing quicker, and they’re smaller. Timing is really important. Execution is everything. So, for a young quarterback, it’s a fast game as it is, it’s that much faster in the red zone, and that’s where you score points. We can’t be down there kicking too many field goals. We’ll take them, but touchdowns count for a lot more, so that’s the point.”

Eagles tight end Richard Rodgers went down with what seemed like a serious injury. He tried to get up and walk off the field but couldn’t, and eventually needed to be carted inside with what looked like a significant lower-body injury of some sort. Rodgers was visibly upset and put a towel over his head as he was carted into the NovaCare Complex.

Also leaving practice on Monday were OL Nate Herbig, OT Andre Dillard and LB Zach Brown, who was observed with a slight limp. Herbig and Dillard seemed to be overheated.

Several Ravens who began practice did not finish, including offensive guard Jermaine Eluemunor, defensive tackle Gerald Willis and linebacker Otaro Alaka. Eluemunor left practice in the passenger seat of a cart. Running back Mark Ingram and left tackle Ronnie Stanley also spent long periods watching from the sideline. Harbaugh did not have updates on any injuries when asked after practice.

Eagles TE Zach Ertz thought the joint practice was worth all the trouble for both teams. Ertz said he doesn’t know if he’ll play in Thursday night’s preseason game against the Ravens, but he said he got in plenty of work that should prepare him for the season.

“Getting 40 or 50 reps at practice right now going against guys that are really good, and it’s a completely different scheme than we go against every day, where as if I was playing a preseason game, I’d get 12 reps max,” Ertz said. “So I think these are very beneficial for me and all the starters. I think it’s a lot harder than a preseason game, these two joint practices, but I’m enjoying it, though. It’s fun to compete against really good players and they got a lot of them.”

Backup QB Clayton Thorson had a strong day of practice. He hit tight end Joshua Perkins up the seam for a touchdown during 7-on-7 drills. Later, he threw a jump ball that rookie JJ Arcega-Whiteside high-pointed perfectly and pulled in for the score, and then he hit Marken Michel for a score on the next play. Thorson made the most out of opportunity presented by the first joint practice.

Eagles defensive tackle Tim Jernigan (former Raven) and defensive end Vinny Curry got some good pressure on Lamar Jackson during 11-on-11 drills. Sidney Jones had a nice pass breakup on a throw intended for Willie Snead, but Ravens tight end Nick Boyle withstood a hard hit from safety Tre Sullivan and started jawing with some reserve defensive backs. Things didn’t get crazy, though—it was too damn hot to fight.