Eagles and Ravens live up to a gentleman's agreement... 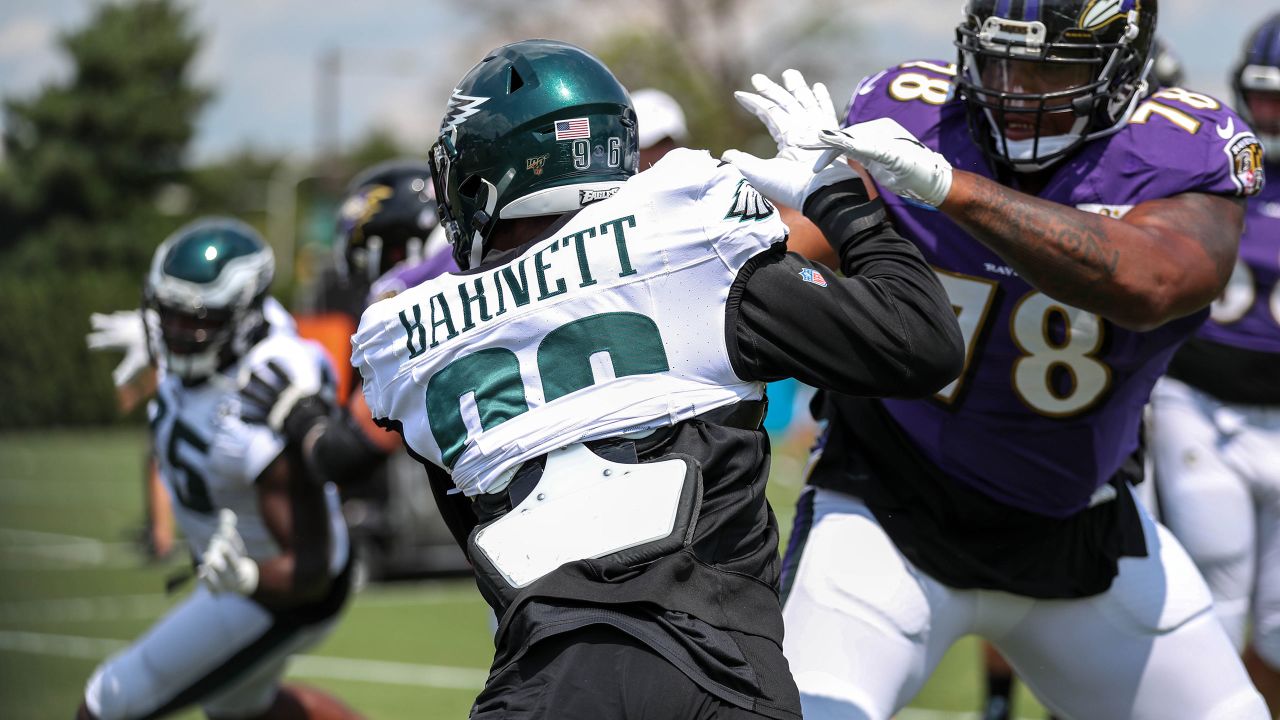 Eagles and Ravens live up to a gentleman's agreement...

Welcome to the new NFL, where joint practice reps are more meaningful than the preseason game which follows.

EYE won’t bore you with a repetition of the many ways in which the Philly and Baltimore franchises are linked in spirit. Let’s just say both teams share a common understanding going into PS3 on Thursday night.

Basically, it’s this: You don’t have to show me yours, ’cause I’m not gonna show you mine. We will both save our best combat plans for a game that counts in the standings. Let’s stay basic and get our veterans some work, then evaluate our bubble guys. Let’s also scout each other for possible trade scenarios. There’s no rivalry here, we both want the same things.

And so if you were looking for a clash of mid-Atlantic contenders for the crown, you will be disappointed. This isn’t even a war game in the military sense. It’s more like a regional corporate convention.

Oh, you might see some zone blitzes (“fire zones”) and stuff like that, but nothing to make you think one team is out to dominate the other. This is more about grading the preparation and performance of individual players in match-up situations. Who makes the read, who doesn’t communicate the read, and so forth. The physicality is still part of the sport, but in this PS3 instance, being in the right place at the right time is more important.

Implicit in this gentleman’s agreement is the action will be tempered to minimize potential injuries.

That’s fine with me. I’m glad to see two teams sharing the same developmental mindset when it comes to preseason football. It’s been a cooperative trend that has evolved steadily over the years, and now it’s out in the open.

The mutual respect between the two teams may dull the appetite of old-school fans who bought tickets to the game at the Linc hoping to witness a beatdown.

In fact, just about all they’re going to witness is two teams from different conferences striving to adapt to different looks. This game will be about versatility on the fly.

All-Pro safety Earl Thomas of the Ravens understands the gentleman’s agreement. After admitting it was tough to get a truly great read on Carson Wentz after just two Eagles-Ravens joint practices this week, the 30-year-old six-time Pro Bowl safety offered this:

“I would tell you, in this league there’s a small pool of guys that you would classify at an elite level,” Thomas said to NBC Sports Philadelphia. “And I think he’s definitely in that pool.

Thomas is a no-nonsense, speak-the-truth kind of guy. So if he’s saying this about Wentz, you can probably take him for his word. And in a controlled practice environment like this, Wentz wasn’t even showing the off-schedule plays that have largely defined his success in the NFL. In fact, it’s still doubtful Wentz will even appear in PS3.

Dave Zangaro of NBC Sports observed a few Ravens defensive backs getting on the bus Tuesday, and they were wholly impressed by the offense they faced at the NovaCare Complex.

“That’s a potent offense that has some big-time playmakers,” nine-year vet Jimmy Smith said. “It was good to get out there and practice against them.”

The Eagles have no shortage of offensive weapons this season and Dallas Goedert wasn’t even on the field for these two practices as he recovers from a calf injury. But having Zach Ertz, Alshon Jeffery, DeSean Jackson and Nelson Agholor on the field is enough of a handful. And after hearing all those names, Thomas quickly interjected that Darren Sproles (even at 36 years old) is still a matchup problem too.

Trying to cover everyone is pretty difficult. And for the Ravens, who as I noted before are really unproven at pass rush right now, it’s things like coverage assignments that are on the line Thursday night. Winning the game means nothing compared to how they are executing their assignments.

“Yeah, it kind of makes it tough to game plan,” fellow starting corner Marlon Humphrey said. “Every team just about has a guy you want to double, but when you kinda got two or three guys you could double, it makes things a little bit tougher.”

“I don’t think I’ve really seen a guy like DeSean Jackson,” said Humphrey, a former first-round pick entering Year 3. “I noticed it yesterday and then I watched it on film. He kind of just glides over the ground. I knew he was fast, but I didn’t know he was that quick at the line. To be [entering his 12th season], he’s pretty fast. Some good work.

“The best thing for me was I got a chance to go against a big guy like Alshon Jeffery, who if he gets any sort of separation it’s usually a catch and really good speed too. And against an MVP-caliber quarterback. Really good opportunity to work for us.”

That’s all this gentleman’s agreement of a game means in the long run for both teams— get in the work, evaluate the hopefuls…and let’s stay in touch.