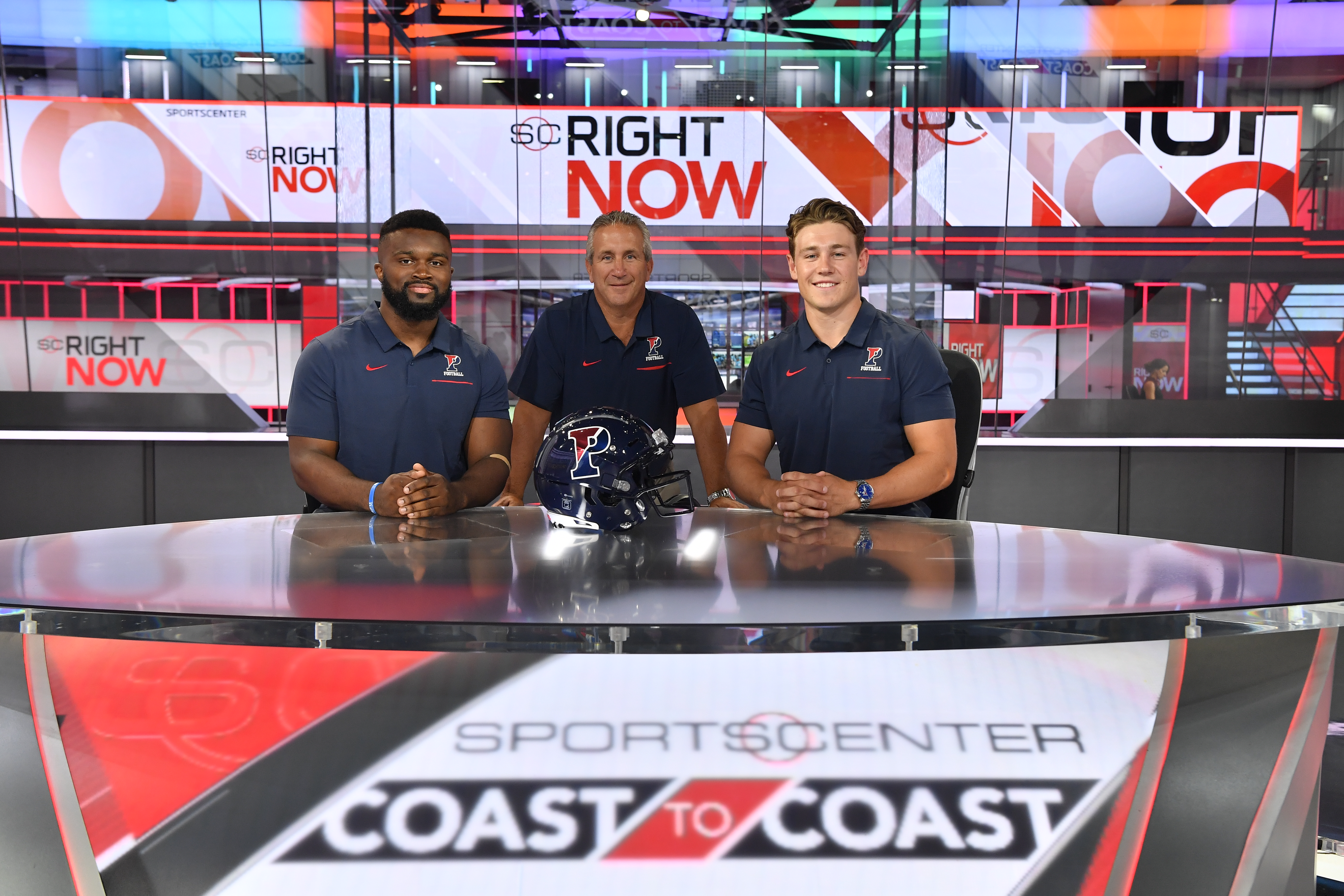 While most college football programs are gearing up for their first regular-season game in a week. The University of Pennsylvania Quakers and the rest of the Ivy League still have a month before they kick off the 2019 season.

The Quakers will open up the regular season against the University of Delaware on Sept. 21. The Blue Hens, however, will open up their season on Aug. 29 against in-state rival Delaware State.

That being said, Penn head coach Ray Priore is trying to make the best of the extra time off before the Ivy League begins their season.

“Well, if you’re smart, you go to the beach a couple of extra days,” Priore said jokingly in an interview after the Ivy League’s Media Day. “It is different from a standpoint, but whether you’re at Alabama, Akron, or Amherst College, we all have the same amount of days to practice.”

“Unfortunately, we start later, but we get a chance to learn from watching. I spend a lot of time talking to colleagues, friends, and watching game film to see what people are doing differently this season.”

Last season, the Quakers finished with an overall record of 6-4 and 3-4 in conference play. They ultimately came in fifth place, which was the same spot that they were ranked at in the 2019 preseason poll.

Priore said that his team learned a lot from last season, which should help them this season in their quest for an Ivy League crown.

“We learned some valuable lessons last year – one being health. If you’re not healthy, it’s going to be tough to be good.”

In addition to the injuries, the quarterback play was not the best for Penn last season. The Quakers head into camp with an open competition between Ryan Glover and Nick Robinson.

“Our lack of consistency on offense and in terms of the quarterback position – I think we were up and down. If you’re going to be a really good football team, you have to play good offense,” Priore explained.

Glover, who was the starter last year as a sophomore, completed 59.5-percent of his passes for 1,482 yards, seven touchdowns, and six interceptions. The Atlanta, Ga. native additionally ran for 392 yards and had three rushing touchdowns.

Robinson, however, completed 67.5-percent of his passes for 306 yards and three touchdowns, which mostly came in the regular-season finale against Princeton.

In that game alone, he threw for 168 yards and two touchdowns. The 6-foot-2 signal-caller originally committed to the University of Georgia out of high school, but spent the 2015 season as the Bulldogs’ scout team quarterback.

After his freshman year, Robinson went to Saddleback CC in 2016 and then transferred to Penn in 2017. During that season, he saw significant playing time in six games for the Quakers.

Priore knows what each quarterback brings to the table and how they’ve progressed. However, he is not ready to make a decision yet on who will be the starter.

“I’ve watched them develop and they’ve taken steps. But we needed to change their focus and mindset a little bit and get them to play with a different technique.”

“Both quarterbacks have some strong tendencies. They both were on campus this summer and got a chance to throw and work out those kinks,” he said

“We’re going to keep in the competitive mode until we get through the preseason and make a decision of where we’re headed.”

Staying on the offensive side of the ball, the Quakers made a coaching change this offseason. Penn introduced Kevin Morris as their new offensive coordinator and quarterbacks coach.

Before joining Penn’s staff, Morris was the offensive coordinator at Monmouth University (2014-18) and Yale University (2012-13). He was also the head coach at the University of Massachusetts ( 2009-11).

With the addition of Morris, Penn’s offense will function a tad bit different this season. However, Priore is still going to put a lot of onus on the quarterbacks to make the right decisions.

“I think there’s a lot of similarities in all offenses, to be honest. I think it’s about how you utilize your personnel and how we get better sets and combinations.

“Everyone in today’s world has the traditional power offense and a little bit of RPO built into it, so I don’t think that will change at all,” he said.

“The pace of play will change. We were over the huddle on the line running snap counts and trying to read the defense. We’re putting a lot back into the quarterback’s hands to make those on the field decisions when he sees opportunities to convert to the right plays.”

Luckily for Morris, he will have one of the most talented running backs in the Ivy League at his disposal in senior Karekin Brooks.

Brooks rushed for 898 yards on 167 carries and had eight touchdowns last season, earning him second-team All-Ivy honors. The 5-foot-11 running back was named a team captain this season, along with senior defensive back Sam Philippi.

That being said, Priore understands how important it is for Penn to be balanced on offense this season.

“As any team does, you want to be balanced. If you’re a one-way team, you’re not going to be good. I think we’ll use the run to set up the pass,” explained Priore.

“We have to make sure our scheme fits what we can do talent-wise. We have some nice deep threat, guys who can throw the ball there, and some young tight ends growing up in the offensive scheme. It’s just how we use our players to set up a running back like KK (Brooks).”

Even though the season opener is still a month away, the Quakers are using the last few weeks of summer to focus on daily improvement in preparation for this season.

“Everybody has to trust each other. We have to be determined, but above all else, we have to be committed to the cause,” said Priore.