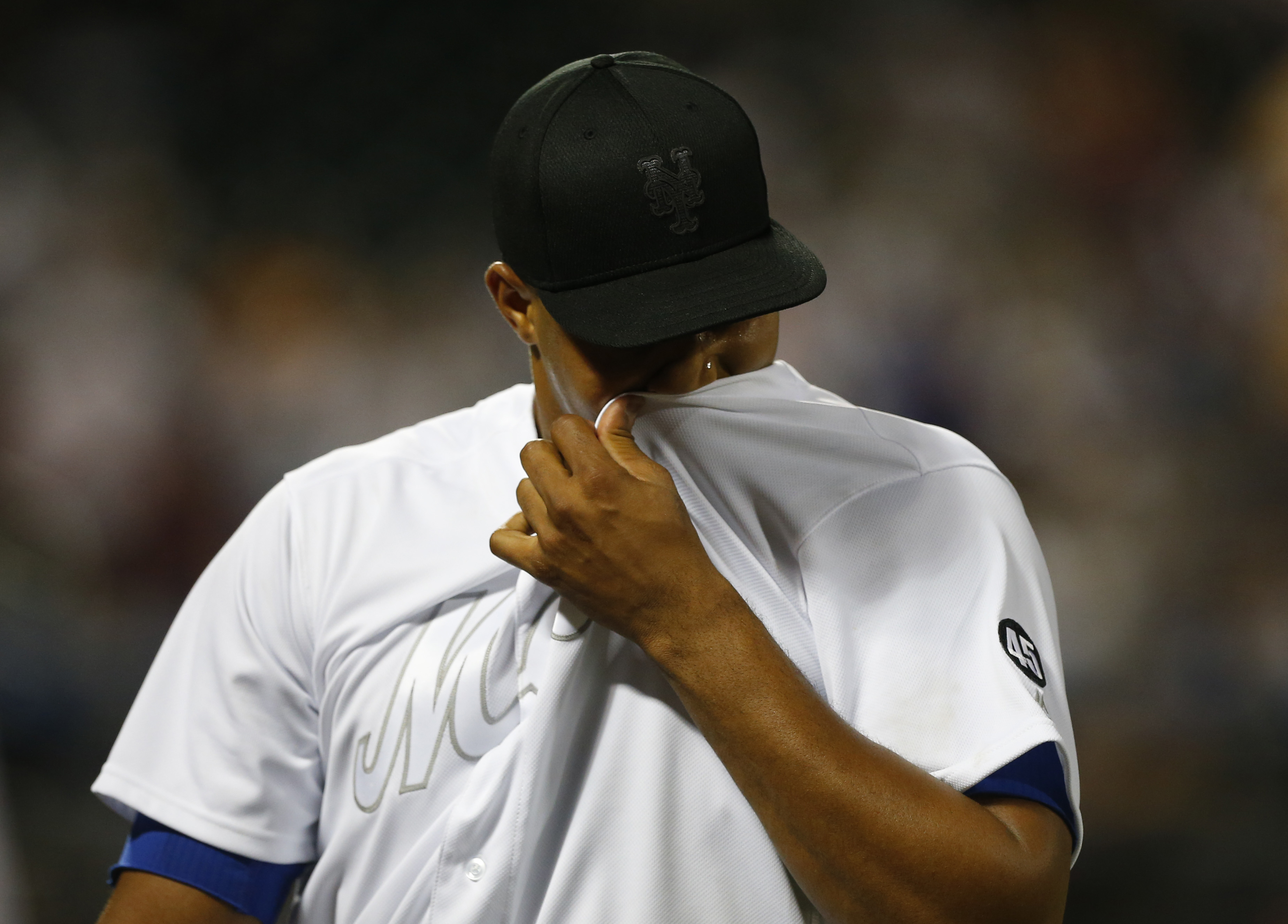 If a baseball fan goes to hell, the Mets’ 2-1 14 inning loss to the Braves is the game that will be played over and over again. Whether you’re at the stadium, or at home watching the television, this is the game that’ll be played. It works because it really doesn’t matter if you’re a Mets fan or not, because whoever your favorite team is will be wearing all white, and your division rival will be wearing all black. Nobody can tell the difference anyway, so insert your favorite team in white. This is your game. Hell.

The first seven innings represented a great pitcher’s duel between Mike Foltynewicz and Jacob deGrom, who was once again stellar with 13 K’s including eight straight at one point, and he also kicked in a home run because this was the kind of game where deGrom usually has to take matters into his own hands anyway. After that, the bullpens were a bit more adventurous yet no less effective. Edwin Diaz hit non-threat Alex Jackson to make everybody nervous but then struck out Ronald Acuna Jr. and Ozzie Albies to send the crowd into a frenzy.

After that, well … it isn’t as if the Braves didn’t try to give this game to us. First you had Anthony Swarzak pitching in the tenth. 3-1 to J.D. Davis: groundout. 3-1 to Rajai Davis: line out. 3-0 to Juan Lagares, gets back to 3-2 before Lagares singles. 2-0 to Wilson Ramos: single. Walks Frazier to set up Amed Rosario with the bases loaded. Gets ahead 1-2 on Rosario, then misses on a slider to go 2-2. With the way he was missing the slider all inning, I’m convinced that he goes fastball. Instead, he goes to another slider which Rosario chases to end the inning.

Then in the 11th, you have Adeiny Hechavarria with a runner on first swinging on a 3-0 count to end the inning. Then in the bottom of the 11th Josh Donaldson fails to cover third base as Joe Panik took the base on a wild pitch. But on that wild pitch Pete Alonso struck out, which was the story of the night: Over-anxiousness by Mets hitters. Michael Conforto also struck out before the threat was thwarted when Aaron Altherr ended the inning with a ground out.

Back and forth we go until the 14th when Handsome Art Howe was down to either pitching Jeurys Familia for a third straight day, or bring in Chris Flexen to finish it out. In retrospect, HAH made the right call. Play to win. It was a roll of the dice but Familia has been pitching well so going to him for an inning rather than trust Chris Flexen in a pennant race was prudent. If the Mets had survived that inning, then you go to Flexen and leave it up to the gods.

(Narrator: They would not survive.)

Of course, it was Hechavarria who had the most important hit of the inning: a double which put runners on second and third with nobody out. (The ball got stuck in the wall and it was originally a triple as Juan Lagares played it, but the umpires overruled it and called it a ground rule double. I thought once an outfielder played a visible ball it was live while throwing your hands up deadened the play, but the rule must have changed so Lagares knew what he was doing and made the correct call.) The Braves tried to give their good fortune back to us as Rafael Ortega had a horrendous at-bat against Familia in striking out for the first out. But newest Brave Billy Hamilton (who would have been nice as the 25th man on the roster here) grounded a single through the drawn in infield to give Atlanta a 2-1 lead.

Familia went on to strike out Max Fried, then after walking Ronald Acuna where it was clear Familia had nothing left, he struck out Ozzie Albies to end the inning and at least give the Mets a chance to win. (HAH couldn’t bring in Flexen at that point with no position players left and Familia’s spot due up in the bottom of the 14th, where HAH could bring up a good hitting pitcher to pinch hit.) Unfortunately, Mark Melancon wiped the floor clean with J.D. Davis, pinch hitter Steven Matz, and Lagares to end the game and the Mets’ five game winning streak.

Lose a long extra inning game? Whaddaya gonna do. Lose a long extra inning game to the Braves? That stings, especially when they gave the Mets chance after chance to win. And when long games happen, you know the bullpen will be somewhat gassed for the next game for both teams, and it’s a lot easier to take if you win the long game. Now, the Mets will have to navigate a game with a depleted bullpen (Seth Lugo also pitched two innings) without having that win in their pockets. And they’ll have to try to get some run support against lefty Max Fried so that when Zack Wheeler gets gassed they can just have Flexen pitch the last three and not worry. Somehow, I’m not sure that’s how Saturday is going to work out. (Oh and also, you might be down a catcher. But more on that below.)

As for Friday, it was good, interesting baseball that just frustrates you because you know you could have had this but it slipped away. No matter what team you root for, it’s the type of game that they’ll replay for you in hell. Endlessly.

You already know how I feel about the uniforms, so tonight’s hate list is simply this: Tomas Nido should have been taken out of the game and sent straight to the hospital after getting hit with a Josh Donaldson back swing in the sixth inning. Donaldson’s bat struck in between the main part of the helmet and the back part of the helmet and probably tagged him in the head. Forget concussion, he could have had a lot worse. That he finished the inning after that was just bizarre.